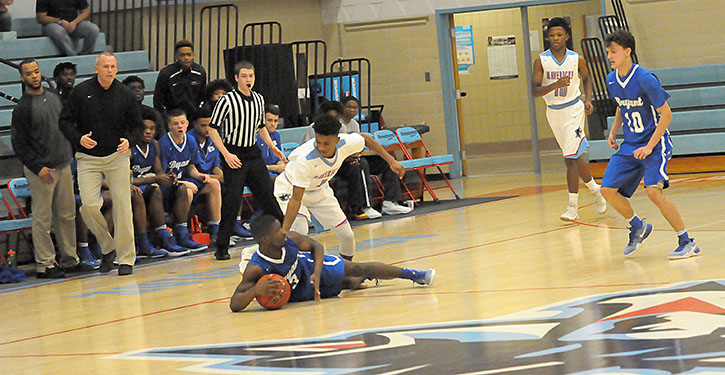 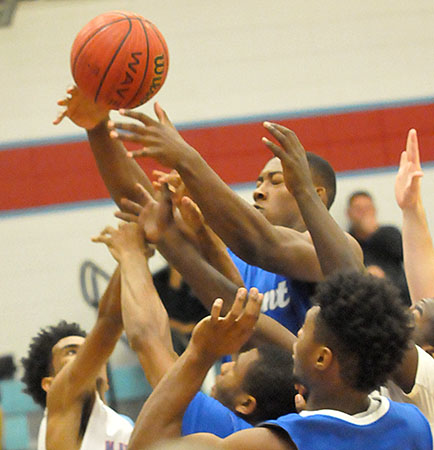 Marvin Moody rises above the crowd for a rebound. (Photo by Kevin Nagle)

FORT SMITH — Practicing end-of-game scenarios are standard procedure in most sports, particularly basketball. That’s one of the reasons the Bryant Hornets’ overtime loss to the Little Rock Central Tigers last Friday was so painful. The Hornets and coaches Mike Abrahamson and Dominic Lincoln additionally disappointed in the way they handled the end of the overtime when, with seven seconds left, the Tigers got up the court and got a shot away in the paint to win as time ran out.

Though the situation was somewhat different on Tuesday night at Fort Smith Southside, the way the Hornets handled a white-knuckle finish was much more effective. The result was a 47-46 win over the Mavericks in a 7A-Central Conference battle.

And “Battle” is the key work not just for the last two games but, most likely, the rest of the conference season in a league that’s so packed with great teams. There will be lots of the games that go right down to the wire. 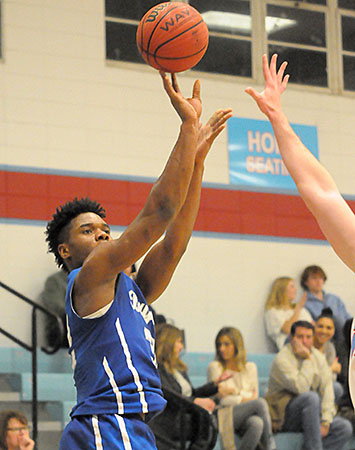 Just Tuesday night, not only did Bryant and Southside tussle to the buzzer, so did defending 7A State champion Cabot and Central with the Panthers holding on for a 2-point win.

The Hornets, now 13-3 overall and 2-1 in league play, will host Cabot this Friday in a rematch of their thrilling — and ultimately crushing loss for the Hornets — overtime war in the State semifinals at Cabot last spring. (A game that, with the results of the finals as Cabot won over Bentonville, may have been, for all intents, the championship.)

The Panthers are 13-1 and 3-0 going into the contest, tied for first in the conference with Fort Smith Northside.

At the :34.4 mark, the Hornets’ Romen Martin was fouled and coolly knocked down both ends of the one-and-one to make it a 3-point game. 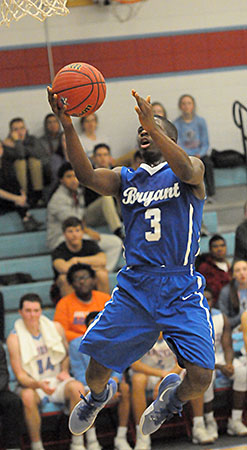 Calvin Allen finishes off a drive to the basket. (Photo by Kevin Nagle)

Southside, in turn, missed on a 3-point try. On the carom, it appeared that the Mavericks’ 6-7 post Alex Keller and the Hornets’ Lowell Washington had a dual possession but instead of a held ball, the officials called Washington for a foul much.

Despite head coach Mike Abrahamson’s protests, Keller went to the line with :17.8 to go and drained both shots to make it 45-44.

On the inbounds play, Martin was grabbed as he tried to work off a screen against the Southside press and, with no time off the clock, he went back to the line and, again, connected on both ends of the bonus to make it 47-44.

The Mavericks took a timeout with :12.4 to go in hopes of getting an open look at a tying 3. When play resumed, however, the Hornets played the 3-pointer tough. Zion Releford missed on a 3 but Keller rebounded. He missed a layup but, on the carom, the ball was tapped out to Will Smith. The Hornets closed out on him well too and his shot rimmed out. This time, Keller got the stickback but it left the Mavericks a point short. The Hornets didn’t need to inbound the ball and time ran out.

“Everybody knew they needed a 3 so I was proud we contested the 3’s,” Abrahamson said. “Yes, they got an offensive rebound or two then got the 2 but Marvin Moody was also smart enough not to inbound it right there. We knew they were out of timeouts. Or foul the guy putting it back in before that. 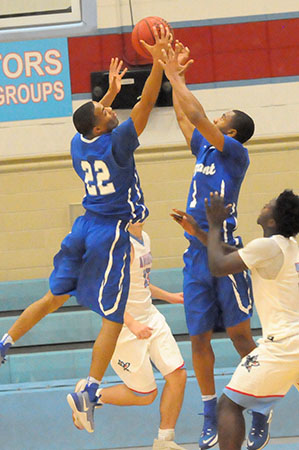 Deron Canada (22) and Romen Martin (1) contend for a between a pair of Southside players Will Smith (30) and Taye Gatewood. (Photo by Kevin Nagle)

“I thought we won the game,” the coach said. “I thought we defended well late, we made our free throws even though we had a lot going against us. They had the momentum but I thought our kids won the game and didn’t let it fall in their lap.”

Martin finished with 13 points and nine rebounds. Calvin Allen added 11 points and Washington scored 7. Bryant got a lift off the bench from Sam Chumley who had 5 points and Deron Canada who scored 4 but also had five rebounds in limited time.

Releford led Southside with 13. Keller had 8 points, eight boards and may have had that any blocked shots as well.

“They were real tough tonight,” Abrahamson said of the Mavericks who dropped to 5-10 overall and 0-3 in league play. “You’ve got to give them credit. I don’t necessarily think we played all that bad. I think anything that we didn’t do well was because they played well. They were tough. They were well prepared. They were physical. I think they gave us their best shot. It sure seemed like it.

“So I’m proud of our team just for withstanding that,” he added. “I know they’re better than their record indicates. I think our guys were a little bit taken aback by just how good they were, how fast they played and how physical they played.

“They’d never played a Southside team before,” the coach said of his team. “I’ve played them. I tried to prepare the kids but it’s just different when you get out there.”

The Mavs led only briefly. Releford scored the game’s first basket then the Hornets went on an 11-1 spurt to gain the upper hand. Martin got the scoring started with a three-point play and Kaleb Turner followed up with a 3 from the perimeter off a feed from Moody.

Washington added a pair of free throws and, after Southside’s Taye Gatewood converted once at the line, Martin popped a 3-point bomb to make it 11-3.

Gamely, the Mavericks got back into the game and trailed just 15-9 at the quarter. They continued their surge in the second period, eventually pulling ahead 17-15 on a drive to the rack by Gatewood with 5:40 left in the half.

After a timeout, the Hornets got back on track with Allen knocking down a triple. Tyrese Solomon drove for a bucket to put the Mavs up 19-18. They had a couple of chances to increase the margin but Garrett Cowart made a steal for the Hornets and dished to Moody who couldn’t get a layup to fall. But Cowart was there to gather the rebound and dish to Allen, who scored to put the Hornets up 20-19.

It was 22-21 Bryant when Canada canned a trey from the left corner to add to the margin. Smith scored for Southside but when Allen beat the buzzer with a driving layup, it was 27-23 at the break.

A follow shot by Braylen Steen and an bucket inside by Washington off a dish from Steen to start the second half pushed the margin to a little more comfortable 8 points. The Hornets led 36-27 by the end of the quarter.

Keller got the first basket of the final period pulling in an offensive rebound. But when Martin answered with a 3, the Hornets had a double-digit lead at 39-29. Gatewood drove for a bucket but Chumley nailed a triple with 5:43 left to give Bryant its largest lead of the game at 42-31.

That’s when Southside began its rally. They got in the bonus at hit their free throws. Ike Moore downed a 3 and, after a free throw by Washington, baskets by Releford and Keller capped the 11-1 surge, making it 43-42 and setting up the final minute of drama.