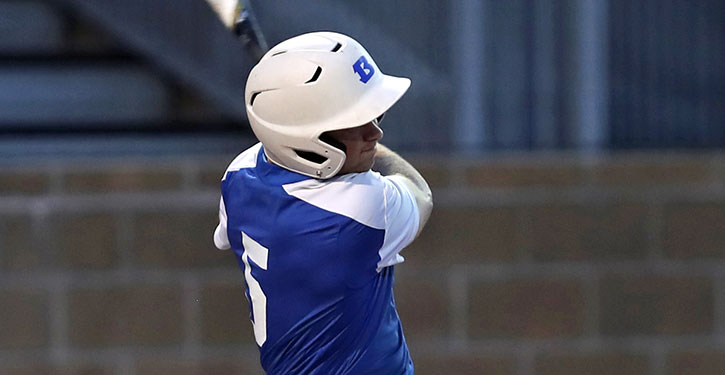 Hornets hold on for 6-4 win over Grizzlies

FORT SMITH — Noah Davis hit an inside-the-park home run as part of a four-run first and the Bryant Hornets tacked on a couple of crucial insurance runs then held off a late rally by the Fort Smith Northside Grizzlies for a 6-4 win in their 6A-Central Conference opener on Monday.

Austin Ledbetter, the fourth Bryant pitcher retired all six batters he faced over the final two innings to earn the save after starter Garret Wilson got through four innings allowing one unearned run on two hits.

The win came after the Hornets suffered their first loss of the season on Saturday to Greenbrier. They’ll return to league action on Thursday at home against Little Rock Catholic and Friday against Conway before the start of spring break.

The Hornets were efficient scoring six runs on five hits and stranding just four. Those hits included a triple by Jordan Knox, who scored two runs in the game.

Ryan Riggs led off the game with a single into right. With Logan White in as a courtesy runner for the catcher, Davis hit the first pitch he saw to left and circled the bases behind White.

The inning continued with both Ledbetter and Conner Martin getting plunked by deliveries from Northside starter Mason Scrivner. J.T. Parker grounded to second for a force on Martin.

Going for the doubleplay, Grizzlies’ shortstop Jett Frazier relayed wildly to first. Ledbetter scored and Martin wound up at second.

With two out, Lawson Speer singled to center to drive in Parker, making it 4-0.

Northside’s first run came in the bottom of the inning. With one out, Sebastian Herrera walked, and courtesy runner Jayden Duggar took second on a passed ball. Frazier singled him home before Wilson put an end to the uprising with back-to-back strikeouts.

The Hornets got that run back in the top of the second. With one out, Knox was struck by a 1-2 delivery. Riggs and Davis followed with walks to load the bases. Ledbetter popped to shallow left where Frazier made the catch. But the speedy Knox tagged and scored.

They threatened to get more when White, in once again to run for Riggs, and Davis pulled off a double steal to put runners at second and third but Scrivner got out of the jam with a strikeout.

In turn, the Grizzlies loaded the bases on a pair of walks and an infield single that Ledbetter flagged down at third, saving a run. Wilson struck out lead-off man Jacob Null then got Herrera to bounce out to Davis to keep it 5-1.

Bryant managed its sixth run in the top of the fourth on Knox’ one-out triple and Riggs’ RBI groundout.

Wilson set down the side in order in both the third and the fourth innings. In the fifth, Will Hathcote relieved. He hit Eli Calderera with a pitch then walked Null on four pitches.

Lefty Tyler Bates took over on the mound. Herrera tried to sacrifice but Bates fielded the ball and fired to Ledbetter at third for a force.

Moments later, however, Null and Herrera worked a double steal and Frazier got a run home with a sacrifice fly.

Bates and clean-up hitter Jayden Darnell battled to a 3-2 count before Darnell unloaded for a two-run homer to center to make it 6-4.

Bates ended the inning with a strikeout but walked the first man in the bottom of the sixth. That’s when Hornets head coach Travis Queck turned to Ledbetter who got Derius Wise to fly to Speer in center then Steffan Fak to fly to Knox in right. He fanned Calderera.

In the seventh, Ledbetter fielded Null’s bunt and threw him out at first. Herrera bounced out to Gideon Motes at first then Ledbetter ended the game by fanning Frazier.