Hornets hope to follow up big win with another (includes stats) 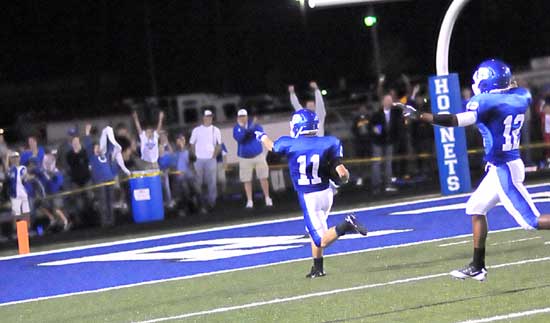 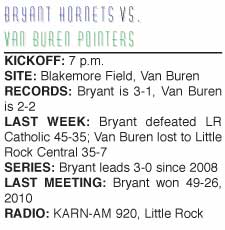 Besides wearing a blue helmet with a big “B” on the side, each edition of the Bryant Hornets football team comes to a point in its season where they take on the mantle of the program’s tradition. They overcome some challenge or adversity — physically, emotionally, whatever. They persevere. They display the competitiveness and the deeply-felt will to win that has become a hallmark of the program since it’s turnaround in 1999.

Each team has its own strengths and weaknesses; some more of one than the other. But somehow, through heart and determination, they find a way to win, often against better talent.

For the 2011 Bryant Hornets, that moment may have[more] been last Friday when, after the Catholic Rockets came back to tie the game at 35-35, the Hornets owned the rest of the contest, winning with offense (including the 80-yard touchdown pass from Hayden Lessenberry to Hayden Daniel), defense (stymying Catholic on its last possession when the Hornets only led by 7), and with special teams (including Jace Denker’s 36-yard field goal to clinch it, not to mention Aaron Bell’s 95-yard kickoff return that set the tone in the second half or the surprise onside kick that Hornets executed in the first half to initially gain the upper hand). 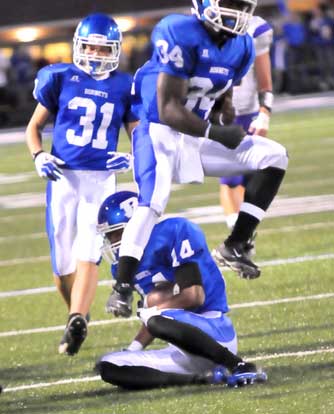 (By the way, for the record: Daniel’s TD, Denker’s field goal and Bell’s return for a touchdown were all into the enchanted north end zone at Bryant Stadium. For a little history on that, go here.)

“Our kicking game helped us out tremendously,” emphasized Hornets head coach Paul Calley. “It ended up winning the game for us, the big kickoff return. Our kickoff coverage was good, the field goal at the end — all of those things we’ve been stressing in the kicking game, paid off. We had a couple of good punts when we needed them.”

It is, of course, no time to rest on any laurels, however. These Hornets, like so many before them, have to follow up an emotional win with no drop in intensity or execution to continue to live up to the standards of the program’s tradition. They can do that by not only maintaining those intangible qualities but continuing to improve in the physical, mental and technical aspects of the game.

“The biggest thing is we had a chance, up two touchdowns, to put the game away and we didn’t do it,” Calley said. “We let them back in it and we had to fight for our lives. That’s something we’ve got to be able to take advantage of.

“I felt like our quarterback got knocked around too much. He took some unnecessary punishment,” he added. “We’ve got to eliminate that as much as possible. It takes a toll on you. The quarterback’s already got a ton of things to think about and when he gets lit up, gets a helmet to the chin, gets kind of foggy, it puts everybody in a bad situation because they have so much responsibility.

“We had way too many penalties,” mentioned the coach. “We broke down defensively a couple of times when we had (the Rockets) in dire straits.”

“We had a few situations where, due to some mistakes, we didn’t get off the field when we should have,” commented Bryant defensive coordinator Steve Griffith. “Catholic made some nice plays but we’re going to continue to plug guys in and out to see if we can still get a better formula. When you win a ballgame, you’re excited about that but when you give up 35 points defensively, with our tradition, we’re not happy with that. So we’re going to continue to work to see if we can get things a little bit better. 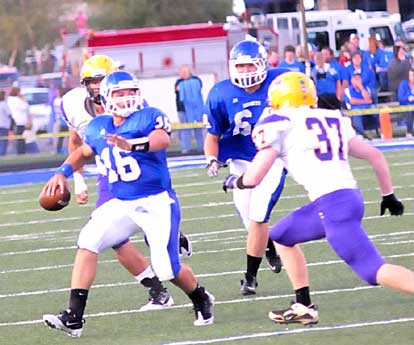 “We’re improving somewhat,” he acknowledged. “We still have a few guys that are still struggling, I think, to understand what all we’re trying to do, so we’re going to continue to work with them and with some other young men to see if we can get players on the field that can execute on every play.”

One encouraging factor was the play of the defensive line including the additions of Parker Dunn and Jacob Powell at end. Both proved far too quick for the Rockets’ tackles to deal with while pass blocking resulting in some key holding penalties against Catholic.

“I thought our defensive line played with a lot of intensity,” Griffith said. “We were obviously undersized compared to Catholic and those guys played extremely hard. Overally, we had a lot of good plays.”

The first test of the Hornets’ resolve will be at Van Buren where the Pointers are 2-2 under new head coach Brooks Coatney, a former Bryant offensive coordinator.

“It’s going to be fun,” Coatney said of going up against his former mentor and freinds. “I haven’t talked to Coach Calley this week and we probably won’t talk to each other until the game. It’s tough a little bit because I had so many good memories winning games and two conference championships there. And, you know, at the end of the night somebody’s going to be excited and somebody’s going to be let down. I can honestly say, I hope we’re excited and he’s disappointed. I’m sure he would say the same thing about me. But we got to be close friends away from football and I think it’s tough on our wives too. I look forward to seeing all those guys, Coach Griff, Coach (Brad) Stroud and Coach (Jason) Hay. 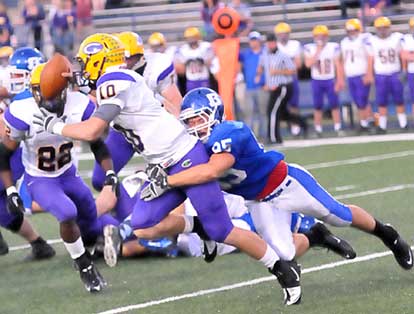 “Van Buren’s a lot like us,” Calley commented. “They’re not very big. They’ve got some talented players in certain positions. Their quarterback runs the ball very well. Defensively, they’re sound in what they do. They’ve got a really good kicker so we’re not going to have a chance to return a kickoff for a touchdown. He’s going to kick it off in the end zone. They’re well coached.

“We’ll try to take what they give us,” he added. “We think we can have success running and passing. We’ve got to throw it and catch it and block better for sure.

Added Griffith, “(Coach Coatney) is going to have them well prepared. They are a young team. They’re young in the offensive line. They’ve got a couple of good skills kids, a very athletic quarterback. They do a nice job of running the option with him. He also throws the ball. It’s going to be a challenge trying to prepare for the passing game but at the same time trying to prepare for the option. That’s two things that put pressure on you in different ways.”

Coatney, who was hired for the job after former coach Mike Lee moved to Bryant to become the athletic director, also noted his team’s inexperience.

“Last year’s team lost 10 starters on offense and a lot of the back-ups last year were seniors too,” he related. “We’re real young, especially on the offensive line.

“Defensively, half the guys have quite a bit of experience and half the guys are new,” he mentioned. “They have been the primary reason that we’re 2-2, have been able to win two ballgames. They kept us in the games and made up for mistakes or things that we’ve done on offense. We’ve leaned on them a lot.

“Our kicking game has been pretty solid,” Coatney continued. “We had a mess-up last week that cost us a touchdown against Little Rock Central. Our kicker is also our punter, Houston Ray. He’s got a real strong leg. He’s done a good job for us.”

“We’re trying to adjust to playing competition that has definitely stepped up since we started playing conference,” Coatney said. “We played Central last week and had five turnovers. We were playing down there, our first conference game and if you play like that against them, you’re more than likely to get beat.”

“Defensively, I think is where I noticed the four guys up front are not real big but they play really fast and hard,” he mentioned. “We know it’s going to be a physical football game because they’re going to try to make it that way.

“We’ve got to do our best to try to control the momentum and prevent big plays and not make the same mistakes we made last week, just turning the ball over,” Coatney concluded. “We’ve got to take care of the ball to give ourselves a chance.”