Hornets hope to take advantage of second chance at Grizzlies 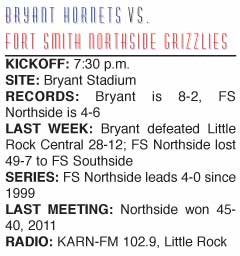 Second chances — not everybody gets them but the Bryant Hornets will tonight when they host the Fort Smith Northside Grizzlies in the first round of the Class 7A State playoffs.

In the second week of the regular season, the Hornets made a nightmare trip to Fort Smith and, despite a furious comeback, absorbed the first of just two losses this season, 45-40.

The “nightmare” had little to do with the game. The team barely made it to Mayo-Thompson Stadium in time for the kickoff. When the charter bus that was transporting the team reached Russellville where the team ate the pre-game meal, it was somehow[more] discovered that the driver did not have updated insurance papers. A scramble began to find enough transportation to get at least the starters to Fort Smith. A bus began the trip from Bryant to pick up the bulk of the team while calls were made to borrow a bus from Russellville High School to get the frontline players and coaches to Northside.

They all made it in time but not without a lot of waiting and worrying.

When they got there, the Hornets were faced with a team playing its first home game of the season and, to top it off (forgive the pun), they were inaugurating a spanking new artificial playing surface.

Still, the Hornets led 21-20 at the half. A 22-point third quarter put Bryant under the gun but, trailing 42-27, they battled back to make it a game and had a chance late to stop the Grizzlies and take a stab at winning it.

But stopping the high-flying Northside offense proved to be a challenge all night. In fact, between the teams, there was almost 1,200 yards of offense that night. Grizzlies quarterback Kenrick Burns rushed for 112 yards and passed for 422. All-everything receiver Shaquille Jones caught 14 passes for 232 yards and star running back Donny Jones rushed for 96 yards.

“They’re doing the same things,” Bryant head coach Paul Calley said of the Grizzlies earlier this week. “I think that’s what makes them so good offensively is they do the same thing and they execute very well.”

The Hornets did their share offensively with 557 yards of offense including a 335-yard passing night for quarterback Hayden Lessenberry. Both Dillon Winfrey and Sawyer Nichols went over 100 yards receiving and Jalen Bell eclipsed the century mark on the ground.

“Defensively, they still bring a lot of pressure,” Calley mentioned. “From the first game, the thing we take from it is they gave us a different look against the same formation every time we gave it to them. That helps us prepare because we don’t know what we’re going to get. We just have to do what we do well. That’s another thing, we know what we can do and what we can’t do now. That cuts down on bad plays offensively.”

As the second game of the season, the Hornets were playing Northside to learn what they could do best and what they couldn’t do well in preparation for conference play. Now, they’ve had seven weeks of play in the 7A/6A-Central to get to know those things better, emphasizing the positive and minimizing the negative. It might be said that they’ve been learning and improving in order to, now, succeed in the playoffs starting, ironically enough, with Northside.

“We had several big third downs that we could’ve converted and we didn’t,” Calley recalled. “We had a couple of turnovers I wish we’d have had back and, defensively, we’ll probably give them a little different look than we did. We’ll probably have fewer things in.”

That game pretty much spelled the end of Bryant’s stab at playing a 3-4 defense. They went back to the program’s traditional 4-3 base and, except for a bump in the road at North Little Rock (where turnovers put the defense in tough situations), they’ve improved steadily on their way to an 8-2 mark and a share of their second straight conference championship.

That’s just one of the things these Hornets have been the first to accomplish at BHS. With a win, they could become the first group to put together back-to-back seasons of (at least) nine wins making the senior class a part of more wins that any other group in school history over three years surpassing last year’s seniors (25).

They could become just the second to claim playoff wins in back-to-back seasons. (It was 2003, 2004 the only other time.)

And, if they do all that, they’ll be the first Bryant team to ever beat Northside.

“At this point, we’re just happy to still be playing and I think our guys are anxious to get to play them again,” Calley said. “It’s a new season. I think we have a different football team now than we had in week two. We don’t have to go on the road — it was a rough road trip all the way around, a bad week. We’re excited about the opportunity.”

The winner plays at Fort Smith Southside in the second round.