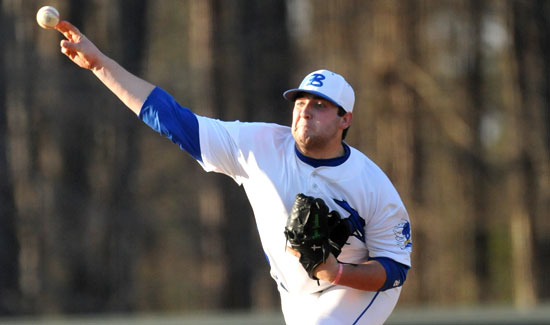 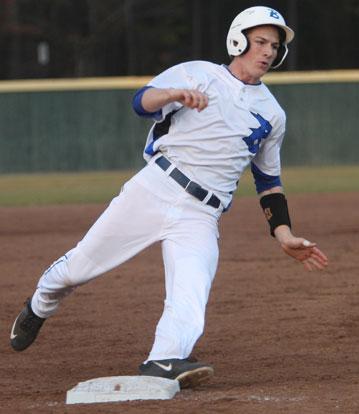 Aaron Orender rounds third on his way to scoring in the bottom of the third inning on Monday night. (Photo by Rick Nation)

Senior right-hander Zach Jackson needed just 62 pitches, which included only 13 that were not strikes, to spin a six-inning perfect game against the Arkadelphia Badgers on Monday night in a 10-0 win for the Hornets at Bryant High School Field.

Jackson struck out nine and only had two three-ball counts and just two balls hit out of the infield as he retired 18 in a row. About the only hard-hit ball was a fly to center off the bat of the Badgers’ shortstop Cutter Jester to lead off the fourth inning that centerfielder Logan Allen hustled back to catch with ease.

The right-hander’s most laborious innings were the third and the sixth when he needed all of 13 pitches. He breezed through the fifth needing just nine.

Meanwhile, his teammates piled up 10 runs on 12 hits, taking advantage of 13 walks and a hit batsman, to take a run-rule win. Junior third-baseman Garrett Misenheimer went 4 for 4 with four runs batted in and the only extra-base hit of the night, an RBI double in the fifth. Allen was on base all five times he came to the plate going 2 for 2 with three walks. Evan Lee had two hits and a walk while Aaron Orender pitched in with a pair of singles. 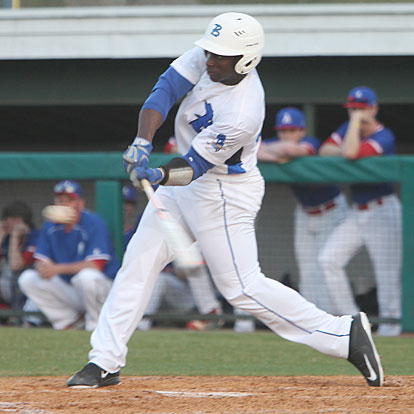 Cameron Coleman, Jake East, Joey Cates and Dylan Hurt were each on base three times. The only starter who didn’t reach base in the game was junior second sacker Seth Tucker but he contributed a sacrifice fly to the four-run first inning.

“Those guys did a good job offensively for us,” said Hornets coach Kirk Bock. “They did what they’re supposed to do. They did what they are capable of doing. What I like is they just competed.

“Of course, it’s easy to compete behind Zach because they see him competing like he does,” he continued. “That was fun to watch.”

Bock said it was just the third perfect game that he’d been involved with. “Brian Waters (at Van Buren) back in ’94 then Wellsy (Ben Wells) in 2010 (in the Class 7A State championship game) then this one,” he related.

Jackson was down 3-0 to Arkadelphia’s Turner Pentecost leading off the sixth but came back to make it 3-2 before inducing a grounder to Tucker at second. 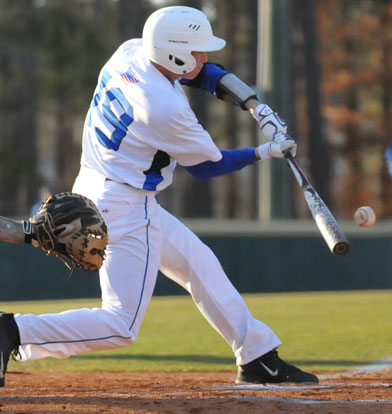 Logan Allen was on base five times. (Photo by Kevin Nagle)

“I was thinking, ‘Oh, no, this might mess this up,’ but he did a good job working back,” Bock said. “One thing you’re sure about Zach, he’s going to compete every time he goes out there.”

Jackson was so efficient, he never reached the early-season limit that Bock and pitching coach Stephen Tharp have placed on the Hornets’ hurlers.

“They go five innings or 75 pitches, whichever comes first,” Bock explained. “We wouldn’t have sent him back out in the sixth if we’d been in that situation. He was well under his pitch count so we were fine. But if he’d given up a couple of hits or something, he would’ve had his five innings. If they’re under their pitch count, you don’t want to take them out in that situation.

“He’s a good one,” the coach concluded.

Jackson and Lee have both signed to join the Arkansas Razorbacks baseball team next year.

The Hornets scored in five of the six innings. The opening salvo in the home first was instigated by Allen, the lead-off man, who singled and stole second. With one out, Lee hit a towering fly that fell in the proverbial Bermuda Triangle in shallow left-center for a hit as Allen held at second. 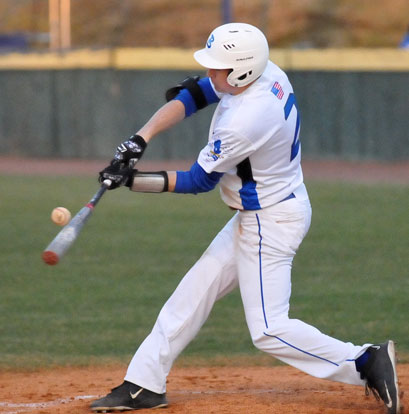 That brought up Misenheimer, who cracked a single to right, driving in the first run. When the ball was misplayed in right (the only error of the game), runners wound up at second and third.

Cates drew a walk to fill the sacks for East. He was hit by a pitch to force in a run. That brought up Tucker who made it 3-0 with his long fly to left. Cameron Coleman capped the inning with a sharp single to right to plate Cates.

In the second, Allen walked and swiped a base. With one out, Lee ripped a sinking liner that Jester could only dive to his right to knock down. With Misenheimer at the plate, Allen and Lee tried to work a double steal but, on a very close call, Allen was called out at third.

But Misenheimer delivered again, stroke another RBI single to right, making it 5-0. 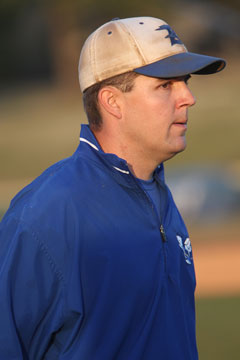 The two-run third opened with a one-out walk to Coleman and Orender’s first hit, a sharp single to left. Allen followed with a base hit to load the bases for Hurt, who yanked a single to left-center that drove in two.

Bryant’s only scoreless inning was the fourth despite Misenheimer’s third hit, a single up the middle, and a one-out walk to East.

In the fifth, the Hornets took advantage of some wildness from the third Arkadelphia pitcher, lefty Eric Groom. He walked the bases loaded (Allen, Hurt and Lee) with one out, setting the stage for Misenheimer.

His double to right-center made it 9-0.

After an intentional walk to Cates to load the sacks again, Lee tried to score the game-ending run on a wild pitch. But Arkadelphia catcher Danny Spradlin made a sparkling play, tracking down the loose ball up the third-base line then firing to Groom in time for a tag.

East walked to fill then up again for Tucker, who hit a shot to center only to have it flagged down by the Badgers’ Brayden Bebee to send the game to the sixth.

After Jackson waded through the bottom third in the Arkadelphia order the Hornets put an end to in the home half against the fourth Badgers’ pitcher. Coleman walked, Orender singled and, after they moved to second and third on a wild pitch, Allen was intentionally passed to set up a force at any base.

But on five pitches, Hurt drew yet another walk to force in the 10th run.

Weather permitting, the Hornets are scheduled to return to action Tuesday at 5 p.m., as they host the Hot Springs Lakeside Rams. 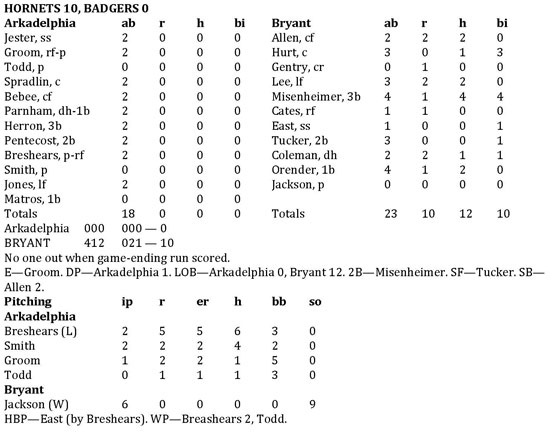