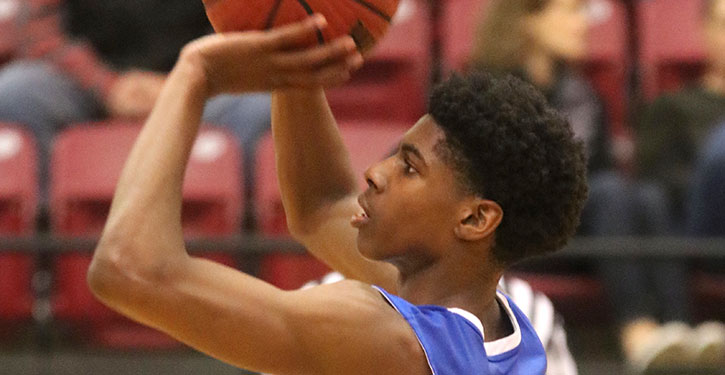 CONWAY — The remarkable Bryant Hornets closed out the regular season on Friday night with their 15thconsecutive victory and 19thin the last 20 games by out-lasting the Conway Wampus Cats on their home floor, 67-64 in overtime.

Khalen Robinson pumped in 31 points including six 3-pointers. He and Treylon Payne converted six of eight clutch free throws in overtime as Bryant finished the game on a 7-3 run after trailing 61-59 in the first few seconds of the extra period.

Conway went over two minutes of overtime without scoring.

The Hornets, now 22-4 overall, enter the Class 6A State Tournament next week at Bentonville West High School as the number one seed from the 6A-Central Conference. Conway will be number two.

But that was already decided going into the game.

Earlier in the season, the Hornets had edged the Cats at home, 61-59, on a last-second layup by Robinson. The two teams will be on opposite sides of the State bracket and could only meet again in the championship game.

The Hornets will await, on Thursday, the winner of the first-round game between Cabot and Springdale Har-Ber on Wednesday. Bryant’s game will start at 5:30 p.m.

Conway, now 19-7, will play Friday against the winner of the first-round game between Rogers and Little Rock Central.

“This was definitely a State tournament atmosphere, packed house, Senior Night, very loud,” Abrahamson said. “This was that environment, for sure. The Conway student section really supports their guys but, hey, we had a lot of kids travel from Bryant. We had a good following tonight and I want to say thanks to those kids. That was awesome.

“We knew we were in for a battle, for sure,” he added. “We knew we would get a good shot from them.”

Rodney Lambert scored 11 points, Catrell Wallace 10 and Camren Hunter 8 for the Hornets, who finish 15-1 to win the conference championship in style. It’s the program’s first since 1989.

Bryant played tough defense throughout but never better that in the overtime. Robinson hit a free throw with :18.3 left to make it 67-64 then Conway had three shots at tying it back up only to fail before Hunter hauled down his seventh rebound of the game to seal the victory.

“It’s always going to be key, but offense is equally important,” said Abrahamson. “When you get down here to the end of the year, you’ve got to be able to score on people, because everybody’s defense is going to be a little bit better. We want ours to get better. You have to have a balance but, yes, I kind of lean toward the defense.”

The Hornets were in a similar situation late in regulation. With :14.7 left, Hunter was at the line with a chance to make it a two-possession game. He made his first free throw to make it 59-56 but missed the second. Conway’s Christian Williams then tied it at the buzzer from 25-feet, banking in the 3.

It was just part of the adversity the Hornets had to overcome. Every time it looked like Conway was going to surge, the Hornets had an answer including three times in the final 4:11 when the Wampus Cats had dunks. The second of those, by Caleb London with 2:54 left in the game, had Conway up 54-53, the last time in regulation.

Defensively, the Hornets appeared set to take charges on a handful of occasions but didn’t get the call.

As they have all season, Bryant just kept playing.

“I think if you want to do what we want to do, you have to face those challenges,” Abrahamson said. “And that’s life. There’s going to be times in life when you feel like you’re almost there and you get knocked back. That’s the way I think our team felt, especially with the 3 they banked in. We missed a free throw or two in the sequence before, but things happen, and you have to respond like a champion if you’re going to be a champion.”

In the overtime, the Hornets turned the ball over and London drove for a basket to make it 61-59.

After a charge cost the Hornets a chance to answer, they forced Terry Clardy to miss. In a mad scramble for the rebound, Payne went to the floor as he lost control of the ball and a foul was called on Conway’s Jakilyn Kaiser.

It was his fifth. He left the game with 13 points and a game-high 10 rebounds.

In turn, Lambert made a steal that led to a trip to the line for Robinson with 1:38 left. He converted twice to put the Hornets ahead for good.

Off a Conway miss, Robinson fed Lambert for a driving layup and a 64-61 lead. London missed, and Payne was fouled with :38 to go. And when he made both shots, the Bryant lead was 5.

Williams was fouled on a 3-point try with :27.8 to go, a call that was contested by Abrahamson. Williams converted all three shots to make it a 2-point game, leading to Robinson’s final free throw.

“They do have several guys,” said Abrahamson. “They’re a dangerous team. They’re so long and athletic. They’ve got good size. They’ve got depth. They’re real tough.”

The game went back-and-forth most of the way. In the first quarter, Bryant led 5-2 then trailed 11-5 and Conway had a chance to expand that, but Lambert and Robinson combined to force a turnover that Lambert cashed in with a 3.

Kaiser hit a free throw, but Robinson drove for a layup to make it 12-10. Kaiser and Mandell Campbell scored the last two baskets of the quarter and the Wampus Cats led 16-10.

Robinson then went on a tear in the second stanza, hitting four 3’s and scoring 14 of Bryant’s 15 points. His third triple had the Hornets up 19-18. He fourth countered a follow shot by Kaiser to make it 22-20.

Milton and Lambert traded baskets to start the third quarter. Hunter hit the offensive glass for a bucket then Lambert drove for a layup to make it 31-26. Off a London miss, Hunter fed Wallace for a basket and the Hornets had produced a 7-point lead.

Though Kaiser kept scoring off the offensive glass and Williams canned a pair of 3 in the final minute of the quarter, the Hornets did not relinquish the lead. A.J. Jenkins hit a tough jumper from the baseline with 2:33 left to make it 37-33. Wallace answered Kaiser then Robinson countered.

Williams’ first 3 cut the margin to 43-40. Hunter converted twice at the free-throw line then Williams hit again to trim the margin to 45-43 going into the fourth.

The Hornets missed two tries to increase the margin before London got the dunk that produced Conway’s final lead of regulation. Wallace scored to push the Hornets back into the lead. Robinson and Payne combined to force a turnover and Payne converted two free throws.

With :30.7 left, Wallace hit a free throw to make it a 2-point game. Conway’s Trey Tull missed a 3 and Hunter was fouled on the rebound. His first shot fell but the second, which would’ve made it a two-score lead, rattled out setting up the unlikely tying 3.