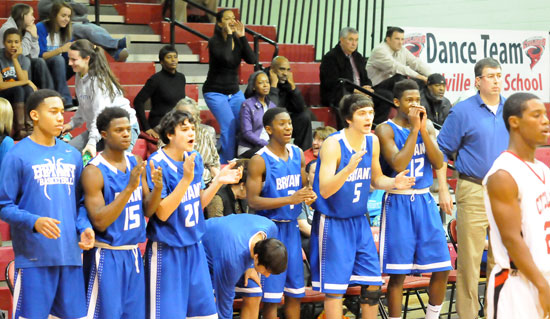 RUSSELLVILLE — C.J. Rainey’s 3-point shot from the right wing was as straight and true as you can imagine. In a frantically-paced, hotly-contested set-to, the Bryant Hornets trailed 51-48 when head coach Mike Abrahamson called timeout with :23.9 showing. His team worked the ball until, with time running out, Rainey rose up over a defender and launched what looked like a game-tying triple. 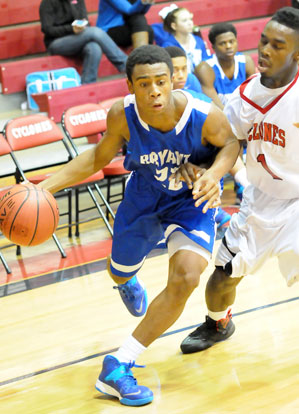 But the shot hit the front of the rim, the back of the rim and came off as the Russellville Cyclones survived with a home victory over the Hornets, who suffered their second straight one-basket loss. (Bryant lost 65-63 against Jacksonville on Saturday at a tournament in Conway.)

The Hornets never led in the game though, after a couple of early ties, they drew even at 28 midway through the third quarter then again with 1:13 left in the game on a drive to the rack by Cedarrian Crosby, making it 48-48.

A free throw by Russellville’s Cody Underhill snapped the tie at the 1:01 mark then the Hornets caught a bad break when Crosby, starting another drive to the hole, was cited for traveling with :44.6 showing.

Less than 10 seconds later, Cyclones’ guard Co-Chese Temple Law got off an off-balance shot on a drive to the hoop to go in as he was fouled. When he missed the charity toss, the Hornets still had a chance but, in the end, they were denied by inches.

Win or lose, however, it was an invaluable game for the Hornets, acknowledged Abrahamson. It was their first road game with a hostile, boisterous crowd. They had to play much of the first half without Rainey, the team’s top scorer, because of foul trouble.

“This really stings and it really sucks,” declared Abrahamson, “but this experience is going to make us better — this environment, this crowd, this loud gym, this quality opponent, on the road. It’s like I told them in the locker room, we’re going to be in other environments like this but I’m not sure if we’re going to be in any more hostile. The Benton game, there’ll be more people there. Other games, there’ll be great crowds but, as far as noise level and other factors — as we progress through the season, we have got to have more mental toughness, which is just simply doing what you’re supposed to regardless of the environment.” 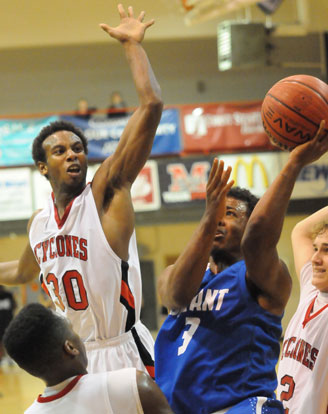 Bryant’s C.J. Rainey goes up for a shot off a drive into the lane. (Photo by Kevin Nagle)

It took a little while for the Hornets to get accustomed to the environment and the Cyclones’ defense.

“You’ve got to give Russellville credit because they came out and punched us in the mouth so to speak,” said Abrahamson. “Nobody had guarded C.J. so aggressively, so in-your-face, trying to deny him. And our other guys too. When we got the ball, they were right on us. It really kind of knocked our guys back, plus the crowd, plus the gym was really loud.

“I was so proud of the way they responded in the first half then specifically coming out in the second half,” he continued. “By the end of the game, those guys had backed off. And that’s a credit to our kids. They really battled. Some kids came up with some big plays. Some kids came up with some plays where they didn’t execute what was called offensively and defensively.

“But you could see progress from the beginning of the game to the end of the game,” the coach asserted. “With this team, we’re not going to use our youth and inexperience as a crutch or an excuse. We’re just going to keep getting better and we’re going to be expecting to win these games against quality opponents, in hostile environments soon.

Bryant fell behind 12-5 late in the first quarter but rallied within 12-11 early in the second. Caleb Strain’s layup off a feed from Romen Martin to beat the buzzer ending the first quarter, making it a 5-point game. 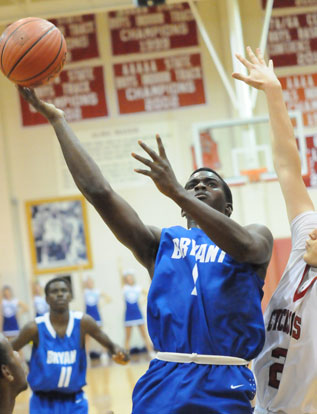 Grayson Giles takes the ball to the hole. (PHoto by Kevin Nagle)

To start the second, Grayson Giles, who led the Hornets with 15 points, knocked down four free throws on two trips up the court. He then gave his team a chance to tie or go ahead as he absorbed a charge.

Russellville, sparked by a pair of 3’s by 6-4 Andy Campbell, surged to a 22-13 lead. Giles and Marquis Rhode traded baskets, Rainey ended the half with a driving layup to make it 24-17 at the break.

Crosby, who finished with 11 points, spurred the Hornets’ third-quarter rally. He answered two free throws from Russellville’s Kentrell Scott with two of his own then took advantage of a turnover with a driving layup, making it 26-21.

After a Russellville timeout, Rhode scored inside but, in response, Martin, a freshman, drained a triple. Rainey followed up with a drive to the rack for 2. In turn, the Hornets’ Ricky Buchanan absorbed a child and, eventually, Giles posted up and knocked down a jump hook to knot it at 28.

But, by the end of the quarter, Russellville, with 3’s from Kregan Kordsmeier and Laws (a buzzer-beater), had pushed back out to a 36-29 advantage.

Aided by the fact that the Cylcones could only convert 4 of 13 free throws in the fourth quarter, the Hornets scrambled to pull back even. Sophomore Kevin Hunt supplied a clutch 3 with 3:09 to go. A stickback by Giles trimmed it to 43-41 only to have Scott score.

But a three-point play by Underhill off an offensive rebound helped keep the Cyclones on top. Giles answered off a drive and, after Scott missed two free throws, Crosby tied it with his slash to the rack at the 1:13 mark.

Earlier in the evening, the Hornets’ JV prevailed by 6. After Bryant had led most of the game, Russellville rallied to tie it. But Jordan Walker hit a pull-up jumper off a drive to snap the deadlock. Austin Green hit a clutch jumper from the corner then Dagin Carden clinched it was a short jumper in the lane. The game was marred by injury as Tai Griffin, getting back to defend against a layup, was knocked off balance and hit the unpadded wall beyond the baseline. When he struggled to get to his feet and staggered, EMTs were called in and Griffin was treated for an apparent concussion. Bryant assistant coach Steve Wilson reported that Griffin was feeling better after being taken to a nearby hospital.

The Hornets varsity, now 2-4, hosts Texas High of Texarkana this Friday with the JV game starting at 6 and the varsity game to follow. The outing will complete the pre-Christmas schedule. Bryant returns to action at the annual Coke Classic at the Stubblefield Center at the University of Arkansas at Fort Smith. They’ll open on Thursday, Dec. 26, against Springdale. Tip off is at 2:30 p.m. 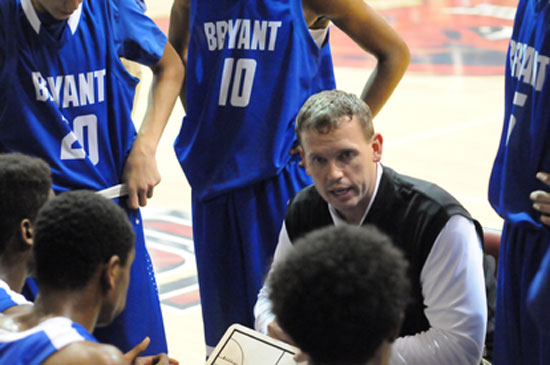 Bryant head coach Mike Abrahamson talks to his players during a timeout. (Photo by Kevin Nagle)