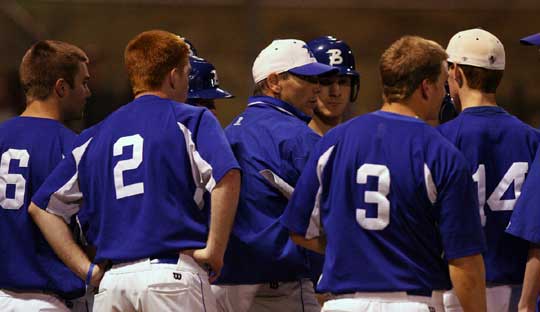 BENTON — After giving up a run on a hit and walk in the first inning, Bryant senior right-hander Ben Wells shut out the rival Benton Panthers on just three hits the rest of the way as his team forged a 4-1 win at Panther Field on Thursday night.

It was the first win since the end of the 2005 season for a Hornets team over a Panthers team, part of that was because the previous four meetings that were scheduled between the two schools were rained out over the last two seasons. So the fact that the threat of rain held off and they actually got to play was as much a headline as anything.

To put it into perspective, it was just the second time in the careers of the seniors on the respective teams that they actually got to be involved first-hand in the contentious, old rivalry.[more] 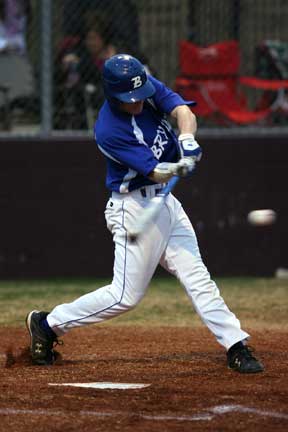 It was also a first for Bryant’s second-year head coach Kirk Bock.

“It was a good night for the Hornets,” he declared.

Bock’s first real taste came when the Hornets were taking infield and the Panthers, preparing to follow them, came out and lined up a foot from the third-base line. He had to ask them to move back because he didn’t want to accidentally miss-hit a fungo into the middle of them. They moved back a little but still weren’t completely out of range.

And Bock was able to keep his grounders between the lines.

Incidentally, when Bock came to Bryant after leading the Harrison Goblins to a Class 5A State championship, there were increasingly impressive accounts of how the Goblins were able to pick off a number of base-runners during the season. And, as these things go, every time the story was told, the number of the pick-offs seemed to increase 10 fold.

It has become apparent, however, that he brought a keen awareness of that facet of the game and the team has shown ever-improving execution of it. In Thursday’s game, for example, Wells picked off a pair of base-runners in scoring position, in key situations. 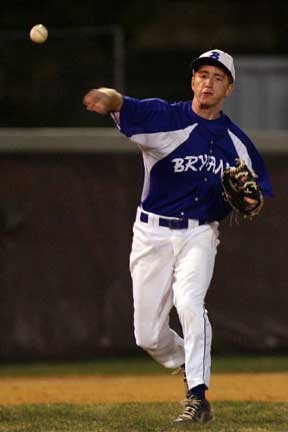 The Hornets had taken a 1-0 lead in the top of the first on a bad-hop single by Chris Joiner, a throwing error on a grounder to third by Garrett Bock that put runners at the corners and a hard groundout to second by Hunter Mayall.

In the bottom of the inning, Josh Creel drew a one-out walk and advanced on a hard shot to the mound that Wells knocked down to retire Lee Richardson. Clean-up hitter Stuart Levy followed with a double to the gap in left-center to chase in Creel. Levon Steward came on as a courtesy runner for the pitcher but with the count to 3-1 on the next batter, Brooks Balisterri, Wells whirled and picked Steward off second to end the inning.

Bryant led 3-1 in the bottom of the fourth when the Panthers loaded the bases with two out on a single by Balisterri, an error that allowed C.J. Engle to reach and a hit batsman that sent Phillip Britt to first. Before Wells made a pitch to the next batter Matthew Krikorian, he picked off the runner at third to end the threat.

The error in that inning was Bryant’s only one of the night.

Part of that was because Benton got solid pitching as well from a quartet of hurlers. Starter Ashton Roberts gave up a lead-off single to Brady Butler in the second. A wild pitch allowed him to go to second then Lucas Castleberry sacrificed him to third. 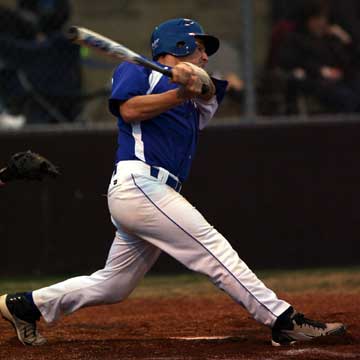 Bock tried to get the run home on a squeeze play with Caleb Garrett at the plate. Garrett got the bunt down with two strikes but it rolled foul, making him a strikeout victim.

The Hornets would have three more situations where they’d try to move baserunners with bunts but none were successful, a rare occurrence.

“We didn’t do a very good job there but that’s what we’re going to do,” asserted the coach. “We’re certainly not going to jump ship on it. I felt like, if we had done that, things would start clicking in. We really just didn’t get into a good rhythm at the plate.”

Dylan Cross drew a walk to put runners at the corners but Roberts got Joiner to pop out to end the threat.

Later, however, Joiner would get some payback.

In the home second, Balisterri cracked the first of his two singles in the game. He advanced to second on a wild pitch but was stranded there as Wells set down the next three. Castleberry made a nice play at third to retire Engle then Wells fanned the next two.

In the third, a one-out error on a fly to left allowed Hunter Mayall to hustle all the way to third. Bryant tried to squeeze bunt him home but Brennan Bullock’s bunt was a liner that Creel caught charging in from first. Roberts got Jordan Taylor to tap out to first, escaping with the game still tied. 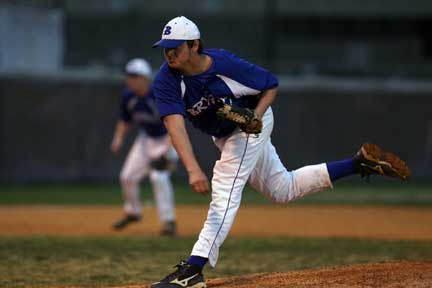 After Wells worked a 1-2-3 home third, the Hornets grabbed the lead in the top of the fourth. Butler walked and Castleberry slapped a bloop single to right. After another bunt attempt failed, a walk to Cross loaded the bags for Joiner who ripped a two-run single to right.

Sophomore Holden Hanley relieved for the Panthers and got out fo the inning, stranding runners at second and third. He would pitch around a one-out single to Taylor in the fifth and a lead-off single to Garrett in the sixth, fanning two in each inning. In the sixth, Joiner made a bid for a second RBI single only to be robbed by right-fielder Troy Johnson, who made a sliding catch as Garrett held at second.

After Wells got out of the fourth-inning jam, he surrendered an infield single to Johnson with one out in the fifth. Johnson swiped second and took third on a groundout by Roberts. Creel drew a walk but Wells got Richardson to line out to Garrett Bock in center to keep it 3-1.

Coy Fitzhugh came on in relief for Benton in the top of the seventh and struggled with his command. He walked Mayall and pinch-runner Hayden Daniel stole second, took third on a wild pitch and scored on a balk.

Bullock drew a free pass but another popped up sacrifice bunt followed. A walk to Butler, however, put runners at first and second. Benton head coach Mark Balisterri then turned to Krikorian who got out of the jam to keep it 4-1.

But Wells finished strong, retiring the side in order in the bottom of the inning. He wound up setting down the last seven batters he faced.

Neither team was at full strength going into the game. Bryant’s senior catcher B.J. Ellis was out while the Panthers were missing three starters.

Now 6-0, the Hornets have defeated five teams from the 6A-South. Along with Benton, now 1-3, they’ve defeated Pine Bluff, Lake Hamilton, Texarkana and Watson Chapel. Bryant is set to host Monticello on Friday.

The two rivals are scheduled to tangle again in Bryant on May 1.