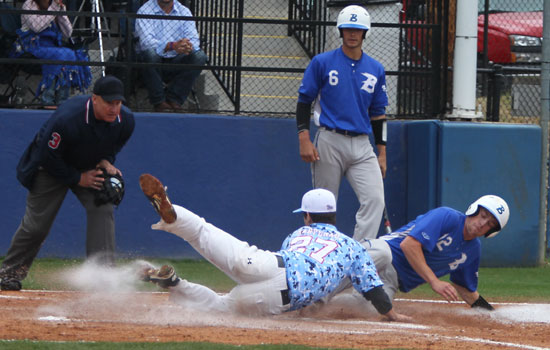 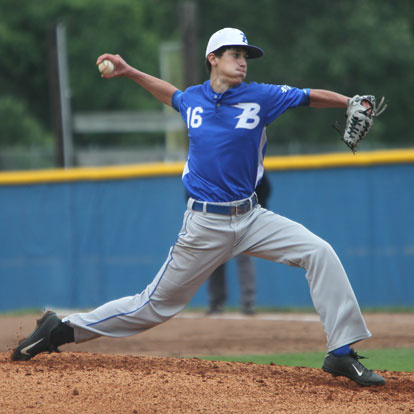 NORTH LITTLE ROCK — When the Bryant Hornets played the North Little Rock Charging Wildcats at Vince DeSalvo Stadium in Burns Park back on March 15, right-handers Blaine Knight and Preston Oberling were impressive as they dueled. Oberling no-hit the Hornets over two innings and Knight no-hit the Charging Wildcats over four frames in what turned into a 4-0 Bryant win.

Knight, who struck out five and walked just one, mentioned afterwards that he really liked the mound.

He still likes it.

Back on that same bump on Saturday in the Hornets’ debut in the 2014 Class 7A State Tournament, Knight fired a four-hit shutout at the Fort Smith Southside Rebels and the Hornets cobbled together a 5-0 victory to advance to the semifinals on Monday at noon against the Conway Wampus Cats, who ousted North Little Rock Saturday night.

“It’s a tall mound and I like it,” Knight acknowledged after his gem in which he fanned 11 and walked two. “I just like the atmosphere here and everything. It feels good.”

Chase Tucker, left, is bowled over by Southside catcher Mark Clark during the first inning of Saturday’s game. (Photo by Rick Nation)

“That was a great first-round game to come out and Blaine kind of set the tone for the State Tournament for us,” commented Bryant head coach Kirk Bock. “I think it’s the best game he’s thrown. It appeared that way anyway, but he’s thrown some good ones. Hopefully, we can get through the next round and he can throw one more.”

Chase Tucker and Blake Patterson came through with key RBI hits in the win for the Hornets, who improved to 27-2 (or 31-2 counting all nine wins in Florida during spring break as varsity games). Patterson’s two-out pinch-hit double in the bottom of the sixth, drove in two runs in a game-breaking three-run uprising. It came just moments after Dalton Holt had plated a run with a sacrifice fly. 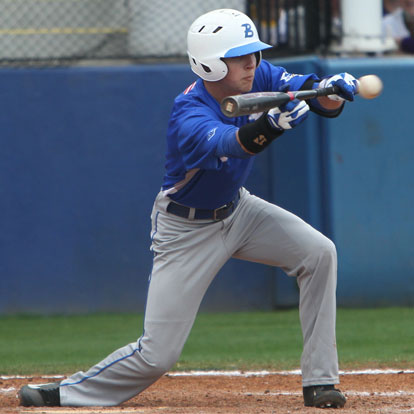 “We were fundamentally sound,” Bock stated. “Once you get to this point — and they’ve got good arms — you can’t take a lot of chances. You’ve just got to get back to your dad-gum knittin’ and do what you’re supposed to do.”

The Hornets scratched out their 2-0 lead on Southside’s highly-regarded right-hander Ty Harpenau.

“Now, it’s that way every game because everybody’s stud’s going out there,” Bock noted. “We’re just going to play basic baseball and let the kids decide the game.”

Three of Southside’s four hits were by Tanner Wiley and Mark Clark, the two- and three-hole hitters. Clark, a 6-5 specimen at catcher, has signed with the University of Arkansas. But Knight struck him out in the first after Wiley had lashed a one-out double.

Later, Clark came up with runners at first and second and no one out. Bryant’s lead was still 2-0 and it was the top of the sixth. Knight got him to hit a sharp bouncer to Brandan Warner at third. He stepped on the bag for a force and fired to first for a doubleplay that took the sting out of the inning. Knight stranded the runner at second when he struck out Rebels’ clean-up hitter Kory Pollard for the third time. 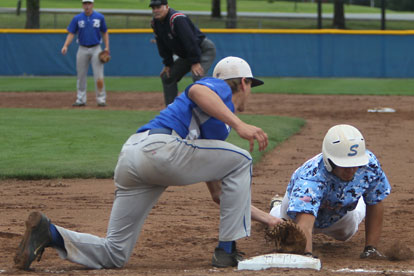 “That was huge,” Bock allowed. “We felt like if we could just stay on breaking balls with him and not only change speeds but change planes, he may struggle a little bit. We struck him out once and he rolled over on the one to third base. It was a great play by Warner.”

Asked what his approach was in that jam, Knight said, “Just get a ground ball and let my defense work, just get it over the plate and let them hit it. The defense pulled through for me.”

In the only other Southside threat, however, the junior hurler took care of it himself. In the fourth, Wiley lashed a single inside third to lead off then Clark hammered a 2-2 pitch to left for a base hit. But Knight proceeded to strike out the next three to escape.

The only other Rebels base-runner was Jorden Lawrence who walked to lead off the second. When Lawrence took a big lead at first, Knight picked him off. 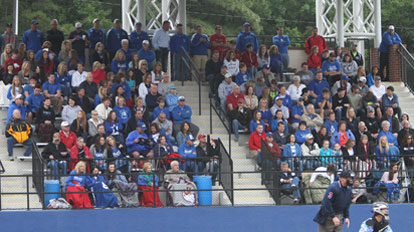 “I like having the pressure,” Knight said. “It just makes everything a little more exciting.”

The Hornets grabbed a 1-0 lead in the bottom of the first. On Harpenau’s fourth pitch, Trevor Ezell rocketed a double to right. Drew Tipton sacrificed him to third and he scored on a wild pitch with Tucker at the plate.

Tucker followed with a roller to short that was booted. He then stole second and drew a wild throw from Clark. He went to third when center fielder Andrew Barley slipped on the wet outfield grass. His throw back to the infield was way off target as well, rolling to the fence between home plate and the Bryant dugout. It looked like Tucker would be able to score with ease but Clark made an eye-popping play, getting to the ball and beating the speedy Hornet senior to the plate, applying a hard tag.

But Tucker would get the upper hand in the third. After Tipton laced a two-out double into the left-field corner, Tucker drilled an RBI single to center to make it 2-0.

Harpenau, just back in action after missing part of the season with an injury, worked around a two-out walk to Warner in the fourth. In the fifth, he walked Ezell with one out and was lifted after 77 pitches.

Lefty Easton Stallings relieved and got through the inning unscathed. But, in the sixth, Trey Breeding lashed a single to right and, with one out, Evan Lee bounced a single into right. When Stallings walked Warner to load the bases, he gave way to Tyler Gray.

Gray’s second pitch was drilled to deep center by Holt for the sacrifice fly that made it 3-0. That brought Patterson, batting for second sacker Korey Thompson. He dueled with Gray to the 3-2 count then blasted one beyond the reach of left-fielder Aaron Henry, chasing home Lee and Warner.

Knight, now 9-0 with an 0.53 earned run average, breezed through the top of the seventh to close it out, striking out Lawrence and Barley on either side of Drew Person’s pop to Thompson in shallow right.