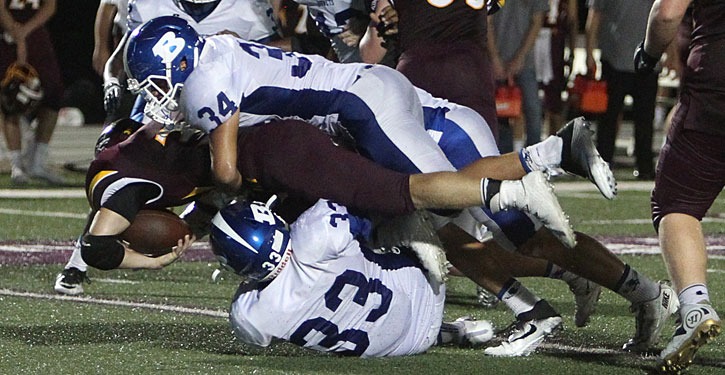 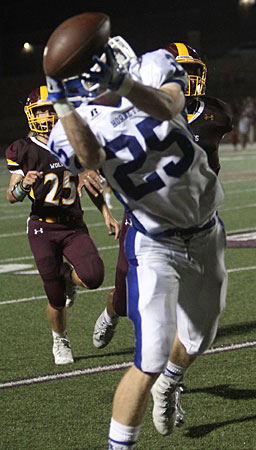 Seth Tucker hauls in a long pass from Ren Hefley that set up a touchdown early in the second half. (Photo by Rick Nation)

PEARCY — The flashes in the sky from lightning beyond the horizon hinted at looming storms as the Lake Hamilton Wolves piled up a 21-0 lead Friday night over the Bryant Hornets. Though the weather never developed, a storm of sorts descended on the Wolves nonetheless as the Hornets rallied for 24 unanswered points for a compelling comeback victory.

“I like the character of our team,” stated Hornets head coach Buck James. “The character of our team says a lot about them because we’ve been behind the eight ball a lot this year and to find a way to try and come out of it — not that we’ve always come out of it — but we find a way to try. I think that says a lot for a good young inexperienced football team.”

Things looked dark and stormy for the Hornets early on. Lake Hamilton scored on its first two possessions and, after a flurry of turnovers — three of which cost Bryant the ball — the Wolves only had to cover 7 yards to score again.

So, with 9:21 still to play in the first half, the Hornets were down 21 with three turnovers and very little to hang their proverbial hats on.

But they answered the adversity, bowed up and, behind an ever-improving offensive line and sparked by running backs Cameron Coleman (seeing his first action of the season after being sidelined by illness) and Kris King, drove 73-yards in 10 plays to crack the goose egg and, unbeknownst at the time, begin their winning comeback effort.

A shovel pass from quarterback Beaux Bonvillain to Randy Thomas got the drive started with a 7-yard pickup. A play later, Coleman converted on a third-and-1. 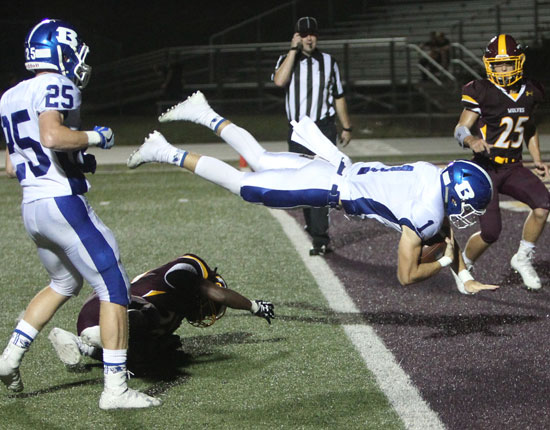 The Hornets reached their 47 but adversity reared up again when a pass from Bonvillain to Reece Coates that appeared to break big was mostly negated by a holding penalty.

On the very next play, however, King careened through the Lake Hamilton defense on a 26-yard gallop. A swing pass to Coleman picked up 8 to the 22 and, after an offsides penalty against the Wolves, Coleman’s 12-yard burst set up King’s 5-yard TD run.

From that point to the end of the game, Lake Hamilton’s offense netted just 47 yards as the defense contributed mightily to the rally. The Hornets mostly just shut down the Wolves’ double-slot dive-option attack. 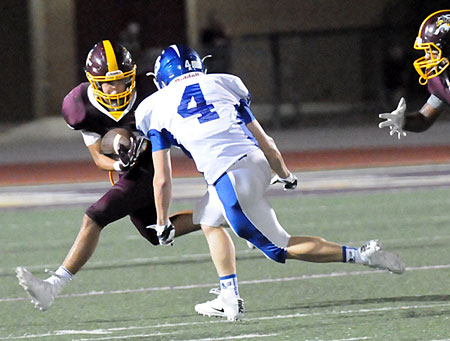 “We practiced a four front all week,” defensive coordinator Darrell Burnett related. “It worked pretty good but something, last night — we didn’t feel good about it. So actually everything we did in the second quarter on was made up about 2 or 3 o’clock last night. We changed it up to a plan B, a plan C, which was a three front. Then we set up one of our best athletes in (linebacker Marvin) Moody to just run free and make plays and we mixed up the coverages to mess with the blocking scheme of the wingbacks.

“So all the credit really goes to the kids,” he stated. “They bought in, they adjusted and they picked it up real quick. The coaching staff worked together to get it fixed and we just happened to have a win. It ain’t what we wanted but we’re 2-1 going to conference.”

One of the keys to changing to the three front was moving senior end Hayden Knowles into a nose position, head up on the Lake Hamilton center. 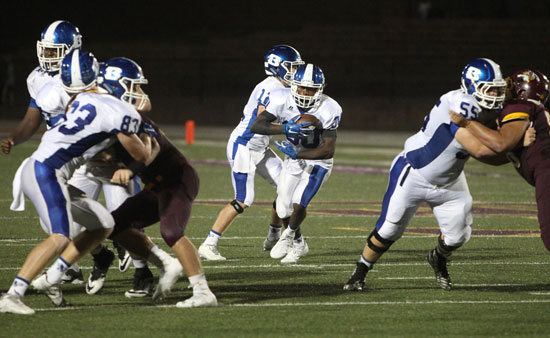 “We moved him inside because their center was too quick for our big guys,” Burnett said. “We moved in Avery Everett, a long rangy guy (at end). So we pretty much just put our athletes on the field and we moved around and they just made plays. We brought (Brooks) Ellis in as a ‘backer. He had a couple of sacks, a couple of good plays. It was overall a good team effort. The guys did good.”

“I thought our defense really played well the second half,” James said. “The adjustments that Coach Burnett and his staff made were outstanding. I just think it takes a lot to change what you try to do all week to stop something when you find out it doesn’t work at all. To come back in the second half with the adjustments they made, I thought, was outstanding. I thought our conditioning paid a big dividend for us too. 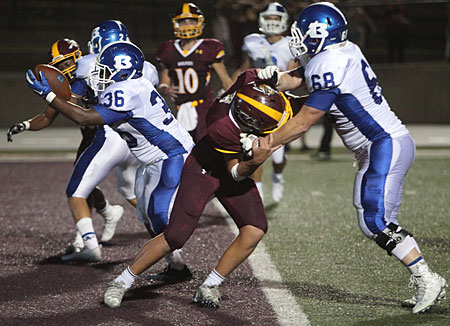 Kris King (36) finds the end zone with the help of a block from Chandler Davis (68). (Photo by Rick Nation)

On the heels of Bryant’s first score, the Wolves picked up a first down but had a chop block push them back to their own 16 and they couldn’t recover. On a third-down sweep, cornerback Collin Welch fought off a blocker and made a nice open-field tackle on the edge to stop it for a loss.

After a punt, the Hornets were just 47 yards away from another score with 1:28 left in the half. A major penalty against the Wolves moved it to the 38. Back-to-back 9-yard completions from Bonvillain to Seth Tucker reached the 20 but the next three passes fell incomplete, two on drops.

So Hayden Ray came on and drilled a 37-yard field goal that kept the Hornets’ momentum going and cut the lead to 21-10 going into the half. 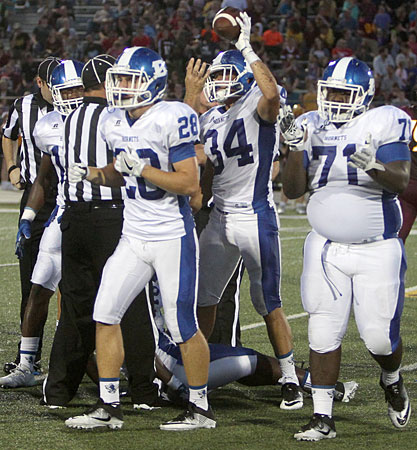 Madre Dixon (34) holds up the ball after recovering a fumble as Brooks Ellis (28) and D.J. Buckner (71) head off the field. (Photo by Rick Nation)

And Bryant got the ball to start the third quarter. Sophomore quarterback Ren Hefley, who didn’t play in the first half, started the second half, opening with a 27-yard strike to Landon Smith. Consecutive plays were negated by penalties against the Hornets but, again, they came up with a play to snatch back the momentum.

Hefley found Tucker deep down the right sideline and the connection plus Tucker’s gain after the catch covered 42 yards to the Wolves’ 11.

From there, Coleman, running wide off a well-sealed right side, dashed into the end zone. With Ray’s extra point, the Hornets had cut the lead to 21-17 less than a minute into the third quarter.

“We got a little spark from Ren,” James noted. “He threw the ball deep and Seth Tucker made the big catch.”

On the ensuing kickoff, Hayward made a bid at a return for a touchdown, sprinting to the Bryant 40 where Ray, who kicked off, forced him out of bounds. 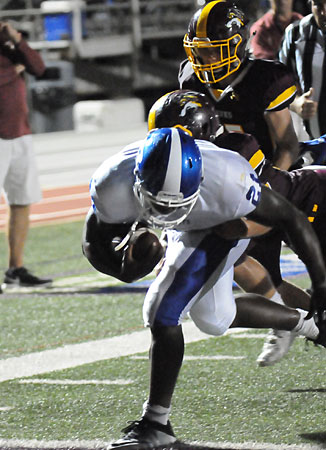 Whatever momentum the return supplied Lake Hamilton, however, was dashed by the continued domination of the Bryant defense. Knowles hauled down Hayward for a loss on third down.

The teams trade punts until, with 4:35 left, Coates fielded a punt by the Wolves’ Aaron Taylor. On a fair catch, however, Lake Hamilton had a player get too close to Coates. With the penalty, the Hornets went on offense at their own 42.

The ground game got Bryant to the Wolves’ 25 where the Hornets faced a fourth-and-5. James went for it and the Hornets converted as Hefley hit Luke Curtis with a clutch completion to the 18.

Safety Cameron Vail came in to play quarterback and, on an option keeper, he sliced through the defense for a touchdown that put the Hornets ahead with 1:09 left in the third quarter. Ray kicked it to 24-21.

Again, Lake Hamilton went three-and-out. Caylin Allen knocked down a pass with good coverage deep. On the next play, corner Collin Welch knifed through to drop running back Jack Johnson for a loss and, on third down, another pass fell incomplete with Allen on the coverage. 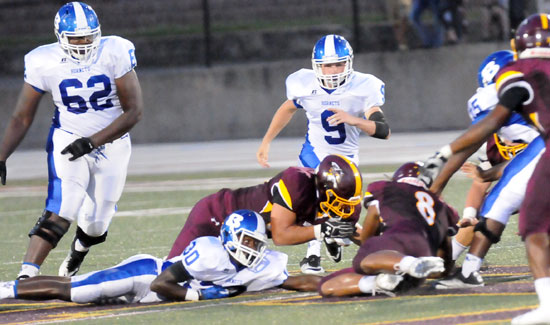 From their own 16, the Wolves had to punt and it looked like Bryant would have great field position in which to work on a clinching score. But, calling a fair catch and perhaps remembering the contact on the previous punt, Coates fumbled and Porter recovered giving Lake Hamilton new life at the Bryant 38.

Fullback Jonathan Buss rumbled 36 yards and only a hustling play by Moody kept him from scoring. That was crucial as the Hornets proceeded to not only deny a touchdown to the Wolves but force a turnover.

Hayward was stopped at the 1 on first down. On the second snap, he tried to leap over the pile and reach across the goal line for the touchdown. But the Hornets got too much push at the point of attack. When Hayward leapt, he was pushed back and the ball was knocked out of his hands and recovered by Allen at the 1.

“That was just an old-school Virginia Tech ‘bear’ defense that we just put in at halftime,” Burnett mentioned.

A play later, Long nearly broke a 99-yard touchdown run. But the last man, safety Jacob Graves tripped him up as he reached the 47.

Hefley completed an 18-yard pass to Smith but a holding penalty negated the gain and pushed the Hornets back to their own 32. Vail came in and kept around left end. As he was hit, the tackler’s helmet knocked the ball loose. Curtis recovered initially but he too lost the handle only to have right tackle Zak Kemp pounce on it to save the possession.

The Hornets wound up punting moments later but, rather than having a fumble recovery and good field position at the Bryant 37, Lake Hamilton had to start the next series from their own 12 as Ray punted into the coffin-corner.

The Wolves nosed out a first down but then started going backwards. Vail, Knowles and Madre Dixon stopped a third-down run for a loss.

But the Wolves got another break. On the punt and short return by Vail, flags flew. Three different penalties were called on Bryant (and one other on Lake Hamilton was overlooked). A 15-yard mark-off against the Hornets gave the Wolves another chance on offense out at their own 42.

But the Bryant defense stuffed them. Nick Smith, Antonio Todd and Everett stopped Hayward for a loss on first down. A deep pass on second down was broken up at the last second by corner Andrew Hayes. Hayward was then sacked by Ellis and the Wolves were punting again with just 4:12 left in the game.

Bryant ate up two minutes and punted it back. Again, the Wolves went backwards. They turned the ball over on downs with 1:10 to go.

James was glad for the win but acknowledged that the road ahead would be rugged as the Hornets begin 7A-Central Conference play, hosting Fort Smith Northside next Friday.

“We’ve got to quit making so many mistakes and costly penalties if we expect to beat good teams in our conference down the road,” the coach said. “We’ve got a long ways to go, a lot to improve on.” 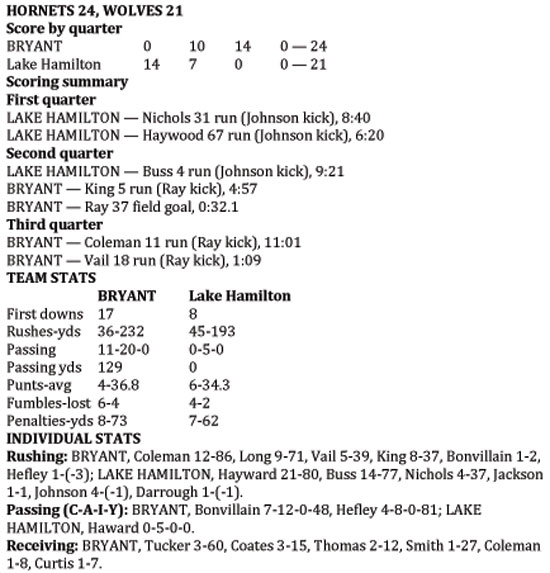