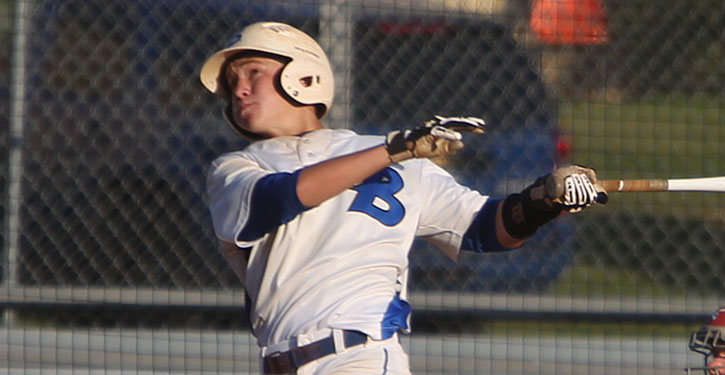 CABOT — The Bryant Hornets have done something no other team in the 7A-Central Conference has done.

They beat the Cabot Panthers.

On Thursday night, Cabot, which came in 11-0 in league play, had to scratch out a run in the bottom of the sixth to tie the Hornets 1-1 but Bryant scored twice in the top of the eighth and Will McEntire waded through the 2-3-4 hitters in the Panthers’ lineup in the home half to earn a save behind senior lefty Beaux Bonvillain in a 3-1 victory.

The winning rally began with Matthew Sandidge’s second single of the game. Myers Buck sacrificed him to second then Brandon Hoover came on as a pinch-hitter for Konnor Clontz. He hit a grounder to McCutchen at short. Sandidge took off for third and McCutchen decided to go after him. But his throw hit Sandidge in the back and ricocheted past third. Sandidge sprinted home to snap the 1-1 tie and Hoover hustled into second.

Clontz returned to the game to run for Hoover, who was greeted heartily by his teammates as he came off the field. Clontz, meanwhile, took third on Seth Tucker’s grounder to first.

With Cabot starter Logan Gilbertson running close to the 110-pitch limit, the Panthers decided to issue an intentional walk to Cameron Coleman. But Gilbertson followed up with a free pass to Jake Wright too, loading the bases as his day came to an end.

Michael Shepard relieved and got Logan Chambers to hit a grounder to McCutchen who got to the ball and went to step on second for a final-out force but the ball slipped out of his glove on the way and all hands were safe including Clontz at home plate making it 3-1.

“It’s like déjà vu from the other night,” said Hornets head coach Travis Queck, referring to the Hornets’ extra-inning rally to beat Fort Smith Southside on Tuesday. “Similar situation, same guys came through in the clutch. We’ve been able to take advantage of errors but we haven’t been able to do things for us. Tonight, we were able to do some of that with their help.

“I’m very very proud of these guys,” he stated.

In the bottom of the inning, McEntire induced a grounder to Scott Schmidt at second for the first out then struck out Denver Mullins. He got clean-up hitter Dillon Thomas to fly to Tucker in center to end it.

The Hornets grabbed the 1-0 lead in the second against the Panthers’ ace right-hander. Chambers led off with a single to left and Coby Greiner sacrificed him to second. A wild pitch allowed Chambers to take third and, with two down, Sandidge slapped a flair to shallow left for an RBI single.

Meanwhile, Bonvillain worked around McCutchen’s single in the first. After a stolen base, the lefty picked him off second.

After his teammates gave him the lead in the top of the second, Bonvillain pitched around an error and a walk inducing a doubleplay ball from Evan Hooper. Greiner fielded the ball at short, stepped on second and fired to first.

In the third, the Hornets were retired in order and Bonvillain pitched around a two-out single by McCutchen.

Wright drew a one-out walk in the fourth and was forced at second on a grounder to short by Chambers. Greiner cracked a single to center but both were stranded at Gilbertson wriggled off the hook.

In turn, Bonvillain retired the side around a one-out error.

Both teams were set down in order in the fifth then both made noise in the sixth. For Bryant, Tucker walked. A pickoff throw to first caught him but he took off for second and evaded McCutchen’s tag after the relay from first. As McCutchen walked the ball to Gilbertson, Tucker saw that third base was uncovered and took off, trying to beat Thomas, the third sacker, to the bag. But Thomas got there in time and the throw was in time to catch him.

In the bottom of the inning, McCutchen rifled a liner to left. Myers Buck started to his right to field in in left but slipped on the wet grass and the ball got to the fence. McCutchen raced to third with a lead-off triple.

With the infield in, McCutchen had to hold as Gray tapped to Schmidt at second. Mullins followed with a swinging bunt towards third. Again McCutchen held. Bonvillain bounced off the mound to get to the ball but he juggled it and Mullins reached safely.

On the next pitch, Thomas got a squeeze bunt down. Again Bonvillain pounced on it but as he fielded the ball, his feet came out from under him. Though he might’ve had a play on McCutchen at the plate, he had to just hang onto the ball and the game was tied 1-1.

The senior didn’t let it phase him, however. He proceeded to strike out Houston King and, though he hit Bobby Joe Duncan to load the bases, he escaped with no further damage by getting Evan Hooper to fly to Tucker in center.

Asked how the players reacted as they came to the dugout, Queck allowed, “It was kind of ‘Here we go again.’ But the glue — Beaux kept it together — he took control of the situation that could’ve been very bleak and those guys fed off of him. Once we were able to give up just one run in a situation where they had a lead-off triple that was almost momentum swinging back out way.

“I can’t say enough about Beaux,” he continued. “That guy has given us a chance every game.”

The coach noted that Bonvillain went back and reviewed video of the last game between the two teams in which he absorbed the loss in a 3-2 contest on April 4.

“Just checking some things,” Queck related. “Him and Coach (Stephen) Tharp and, actually, Boston (Heil) and McEntire came with a good plan. And they executed the plan to perfection.

“The only guy that gave us any problems was the lead-off (McCutchen) and it wasn’t early in counts either,” he noted. “He was behind in counts. Beaux would get up on him and the guy’s just a winner, very impressive. But Beaux pitched his butt off. They swing it well.”

McCutchen’s fourth hit came with two outs and two strikes in the bottom of the seventh but Bonvillain picked him off first to send it to extra innings.

With the win, Bryant improved to 16-7 overall and 7-3 in conference play, still trailing North Little Rock by a game in the battle for second place and a first-round bye at State (along with a chance to perhaps catch Cabot for a share of the conference title. The Hornets host North Little Rock on Senior Night Tuesday, May 2, then finish up league play at Conway Friday, May 5.

Before State begins in Bentonville on May 11, the Hornets will finish the regular season at Sheridan on Monday, May 8. 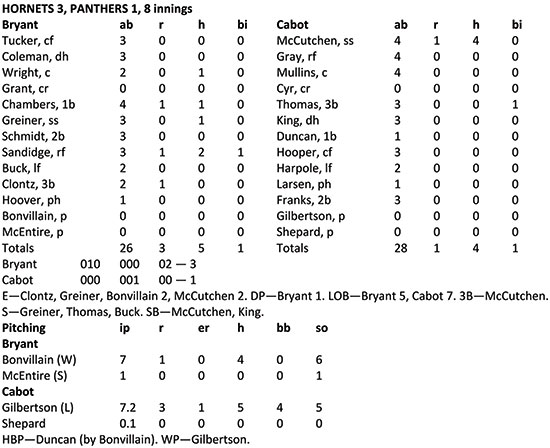