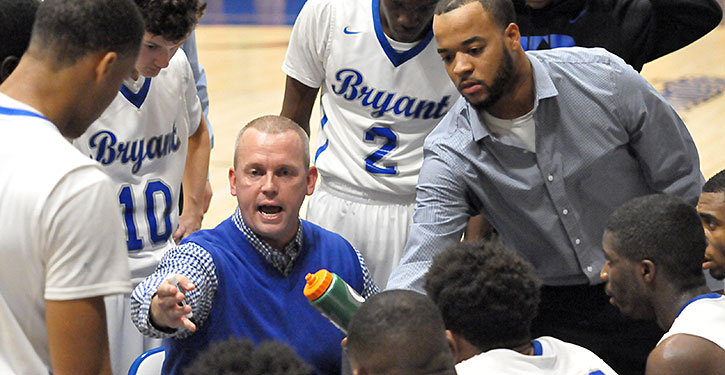 Hornets, Pointers renew rivalry in first round at State

Playing the host team at a State Tournament is always a challenge particularly with the resounding noise of a basketball arena. It becomes an emotion-laden environment that can lift a team when they’re down and carry a team to great heights when they get rolling.

The senior-laden Bryant Hornets know all about that. Nearly a year ago now, they had knocked off the top-ranked Fayetteville Bulldogs to advance to the Class 7A semifinals in Cabot. A trip to the State championship game was on the line and whom did the Hornets get? The hosting Panthers. In a game that went down to the wire, even into overtime, Cabot held on then surged and won. The next week, they captured a State title over Bentonville and Malik Monk who, this year, may be the Player of the Year in college as a freshman at Kentucky.

On Thursday, the Hornets make their return to State, this time at Van Buren. They’ll face the host Pointers at 2:30 p.m. Classes at the Van Buren High School will be dismissed so the students can cheer on their classmates in the game.

“The environment did affect us against Cabot and they know that because they’re reminded of that,” Bryant coach Mike Abrahamson said of his team. “What I hope is that they’re determined to grow in that area and expect adversity to hit and then have a plan on how to handle it when it hits, not just react when it does. That’s what we’re trying to do but it’s a lot harder than it seems and it’s a lot harder than it sounds. It’s a lot easier said than done.

“It’s just one of those things that, at some point, these guys are going to grow up and they’re going to stop letting that affect them,” he continued. “I hope it’s this weekend. But it’s just one of those things that you don’t really know until you do it. We’ve been close a couple of times. Conway was excited to beat us here at home and our guys were excited to beat Conway at Conway and on their Senior Night. I hope that that opens the door to being able to play at your highest level in any environment. We’re just not going to know that until we actually do it.”

To prepare for the practical matter of the sound, Abrahamson has had managers playing loud music throughout practice.

“To communicate through that tough environment,” he said.

Bryant is the No. 6 seed from the 7A-Central Conference but played every team in the league tough. Against league champion North Little Rock, they fell 61-59 and had a chance to tie or win it at the buzzer. Against second-seeded Fort Smith Northside, they lost in overtime, 69-67. Likewise, they took third-seeded Little Rock Central to overtime before falling 72-70.

In addition, the Hornets defeated fourth-seeded Cabot, the defending State champion, then took them to overtime in the second meeting before suffering a loss. They finished the season with a victory over fifth-seeded Conway.

And an encouraging factor is that those games against North Little Rock, Northside and Conway were all on the road as well.

Plus, the Hornets have fared well against the teams in Van Buren’s league. Early in the season, they garnered wins over co-champions Springdale Har-Ber (in a Conway tourney) and Bentonville (in a Bentonville tourney). They also edged fourth-seeded Fayetteville (in Conway).

“I think all it means is kind of what we felt all along,” Abrahamson related, “that, if we control what we can control and we don’t let bother us what we can’t control, then we can compete and hopefully beat anyone in this tournament.

“But we didn’t win a lot of those close ones in conference,” he acknowledged. “We won some close non-conference. But we have to see ourselves do it against somebody that, to these guys, is perceived to be really good. Conway, we know they’re good but we’ve got to do it in the State tournament, set it in an environment — we’ve got a tough Van Buren opponent.”

“They’re well-coached,” Abrahamson said. “They’ve got a new coach (Austin Trembley) this year. They run their stuff really well. They know who they are, what they need to do to be successful and they’ve bought into that. They’re very much a team, a together unit. I don’t mean this disrespectfully but they’re very much a rah-rah team so anything that goes right, that place is going to erupt for them.”

The Hornets should be familiar with the gym. They were in the same conference with the Pointers the last few seasons. But it’s a young Van Buren team with just one senior.

“They’ve got a couple of real good shooters and both of them can take it on the dribble,” Abrahamson said. “They’ve got a spot-up shooter and they’ve got one really experienced kid, (Beau) Beckner. This is his third year starting.

“Two years ago, we had them on the ropes here,” the coach recalled. “Mitchell Smith, who’s now at Missouri, was in foul trouble and that kid (Beckner), as a sophomore, really stepped up big, scored 6 straight points at the end of the first half to keep them in the game and we ended up losing the game by 6. We couldn’t take advantage of their big kid being out of the game because that kid stepped up. He’s real physical and goes after every offensive rebound and just has a certain toughness and presence about him that the other kids feed off of.

“They’ve got a 6-7 sophomore post player that, from the time I saw them live in December to now, is much improved,” he added. “They’ve really worked with him and he’s worked on his game. It looks like he’s really been listening to his coaches.”

Depth may be an advantage for the Hornets, who regularly go 10 deep.

“If we can get into their bench — they may still have some good players over there but they’re not playing very much,” Abrahamson acknowledged. “So, we’ll try to do that.”

As mentioned, the Hornets come into the game off a victory. Are they in a position to peak at the right time?

“I hope so,” said Abrahamson. “It’s just hard to tell with teenagers. Sometimes you do things in practice and you do them against each other and things don’t look very good and you don’t feel very good about it. Then you go do it against your opponent and it looks better because, on your own team, everybody knows what’s coming. So, it’s been a little ugly but we hope that leads to better play.

“The thing I’ve been stressing to them is that we treat every game the same,” he continued. “Sometimes that’s difficult for them because it is a grind. But what we hope is, because we treat every game the same even in November and December, there’s no extra anxiety or pressure just because there’s the title of ‘the State tournament’. Now, what we hope is that other teams try to treat it differently.

“We always say that success is found in our daily agenda,” the coach concluded. “Well, we didn’t want to finish sixth. That isn’t what we feel is a great success although there were some really talented teams and that’s probably what we deserved. But maybe, right now as we turn the calendar to March, we don’t have to be sixth. We’ve got a fresh start. Maybe success wasn’t found during conference play but what we went through can lead to success now. We hope. But there’s no guarantees. Players have still got to make the plays.”