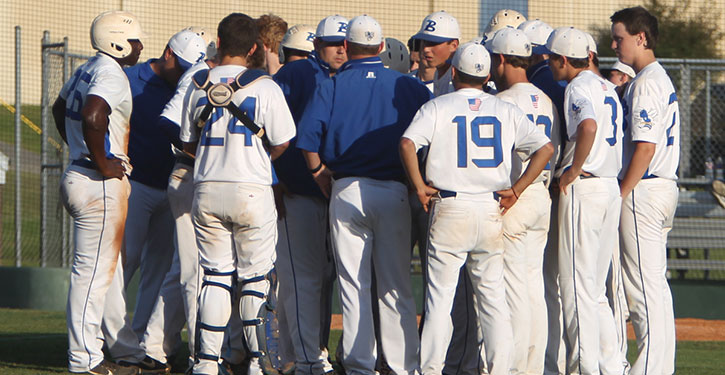 Whew! That was close. 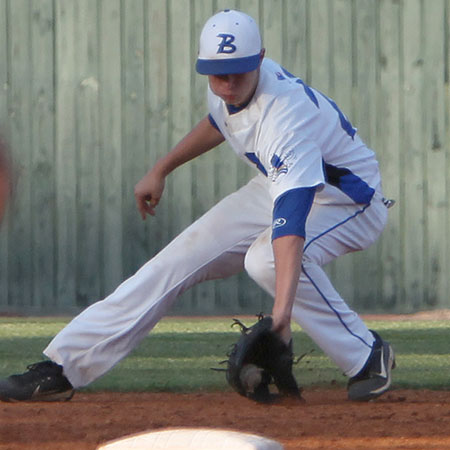 The Bryant Hornets, trying to stay on the heels of the North Little Rock Charging Wildcats in hopes of moving up into second place in the 7A-Central Conference and earning a first-round bye for the Class 7A State Tournament, barely avoided a crippling stumble with some late-game heroics on Tuesday night in a 3-2 win over the last-place Fort Smith Southside Mavericks in eight innings.

Trailing 2-1, the Hornets were down to their last strike when Coby Greiner bounced an RBI single up the middle in the bottom of the seventh to tie the game. And, in the eighth, Matthew Sandidge singled and Brandon Hoover got a bunt down that Southside third baseman Mac Moody threw wildly to first and down the right-field line. The speedy Sandidge scored all the way from first to provide the winning run.

The Hornets had a chance late thanks to stellar relief pitching from Will McEntire and Boston Heil. McEntire relieved starter Seth Tucker in the top of the fifth. Southside had loaded the bases with two out but McEntire, using a fake-to-third, throw-to-first move, picked off Jake Melton at first base to end the threat. He then retired seven in a row before surrendering a one-out walk in the top of the eighth. Heil came on and was greeted by Melton who drilled a long fly to center that Tucker ran down just shy of the track. A strikeout ended the inning and set up the Hornets’ game-winning frame. 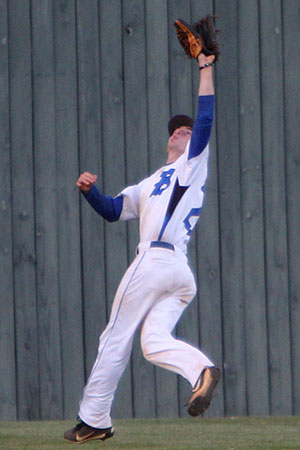 Seth Tucker reached up for a flyball in deep center late in Tuesday’s game. (Photo by Rick Nation)

The Hornets had struggled to get a key hit in an RBI situation all game. They wound up stranding 11 runners, seven of them in scoring position.

In the seventh, Tucker was robbed of a hit by Mavs shortstop Brock Thibodeaux but Cameron Coleman followed with clean single to left-center. He then stole second. After Southside reliever Ryan Horn got the second out on strikes, Logan Chambers grounded into the hole at short. Thibodeaux had no play and the Hornets had runners at the corners with Greiner coming up. When the count got to 1-2, Chambers took a big lead off first to try to draw a pickoff throw but Horn delivered the pitch and Greiner cracked the game-tying single up the middle.

“As I said earlier this year, that’s a guy I’ve seen succeed in that situation,” said Hornets coach Travis Queck. “When he got down to two strikes, we tried to put something on. They just didn’t bite. But he did his job, getting the base hit.”

Queck added that Hoover had struggled to get bunts down in batting practice but, when it really counted, he rolled one right up the third-base line resulting in the wild throw and the winning run.

“We’ve been preaching for the last few weeks about when you get the opportunity get the job done,” said Hornets coach Travis Queck. “We haven’t necessarily succeeded but the process is continuing and the guys are buying into the process. Right there, you saw a guy just do what he had to do to help the team. As we’ve done a lot this year, we took advantage of their mistakes. That’s what happened right there. 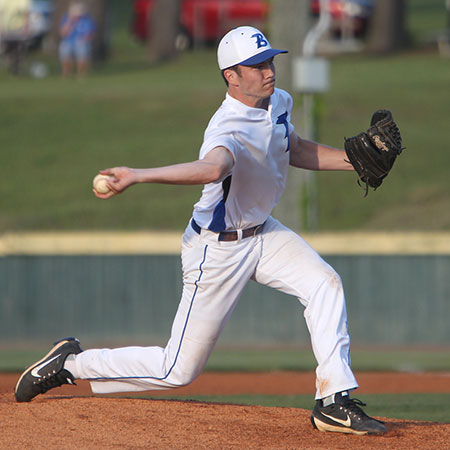 Boston Heil picked up the win in relief for the Hornets. (Photo by Rick Nation)

“Those are two situations right there where our backs are against the wall and they fought,” he noted. “That was very good, very healthy to see for later on.”

In the third, a walk to Kinner Brasher gave Southside a chance. Thibodeaux blooped a single to center then Moody drilled a double to right-center that chased both of them home, though he was thrown out at third to take the starch out of the inning.

The Hornets were unable to take advantage of singles from Coleman and Jake Wright in the bottom of the third.

Wright, the Bryant catcher, made a big defensive play in the top of the fourth. With one down, Braeden Myers singled. Daylin DePriest followed with a grounder to Konnor Clontz at third. He threw to second for a force but the relay to first was errant. DePriest headed for second but Wright had hustled down the line to back up the play, got to the ball and threw out DePriest at second to end the inning.

In the bottom of the fourth, the Hornets got their first run. A one-out walk to Schmidt was followed by Sandidge getting plunked by a pitch. Hoover followed with a drive to center. As Schmidt and Sandidge tagged up, Brasher made the catch then dropped it. Schmidt sprinted all the way home while Sandidge took second. Hoover stayed at first before the umpire in the field ruled that Brasher had made the catch but dropped the ball as he transferred it to his throwing hand. Hoover was out but the Hornets had a run. Clontz flied out to center to end the inning.

That set up the fifth, which started with Tucker striking out Bennett Weindel. He got Brasher to hit a slow roller wide of first that Chambers came off the bag to field but Brasher beat Tucker to the bag for a base hit.

Tucker got Thibodeaux down in the count 0-2 but then struck him with a pitch. Moody flew out to center then Tucker again came within a strike of getting out of the jam before hitting Melton.

That moved Queck to call on the sophomore McEntire who ended the inning with the pickoff.

“That comes back to a little maturation on his part because when we went to Texas, it cost us a game,” Queck recalled. “Against Bryan (Texas), we didn’t execute it and we gave up three runs in the first inning and we end up losing 6-4. We’ve been preaching to Mac that we’ve got to finish that. To his credit, he did it.”

The right-hander struck out two in the sixth and two more in the seventh as he quieted the Mavericks’ bats.

“McEntire, he calmed it down,” Queck said. “He brought down a tense situation and made it calm. The guys reacted well and he did a really good job.”

The Hornets continued to threaten but each inning ended in frustration. In the fifth, with Horn on in relief, Coleman and Wright drew walks. Chambers grounded into a force at second to move Coleman to third but he got no further as Greiner flew out to center.

In the sixth, Schmidt walked and, with Grayson Prince on as a pinch-runner, Sandidge sacrificed him to second. He took third when Hoover grounded out to the right side. Clontz followed with a great bunt that looked like it might get the tying run home but Horn made a nice play to just nip Clontz at first to end the inning.

The Hornets improved to 15-7 overall and 8-3 in conference play with a battle against league-leading Cabot on the road this Thursday. The game was originally scheduled for Friday but has been moved up a day due to the threat of inclement weather on Friday. 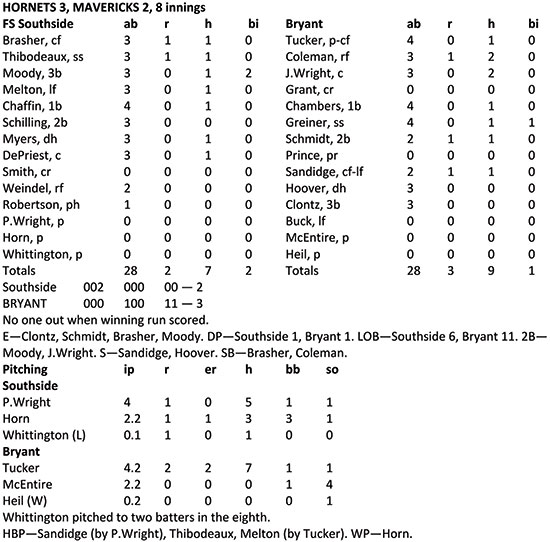