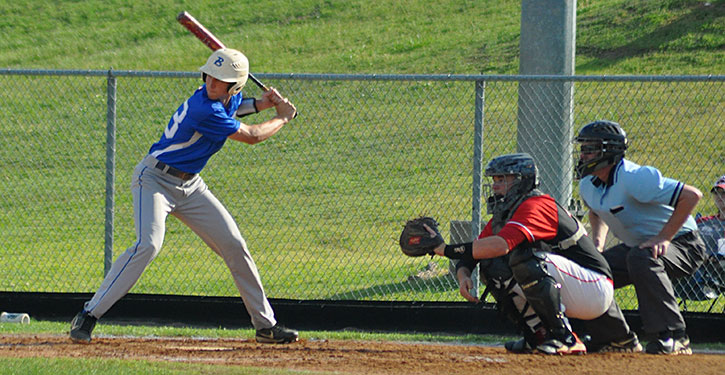 Hornets put Tigers away late, move into third in conference

LITTLE ROCK — Though they never trailed, it was never quite comfy for the Bryant Hornets Friday until they broke through with a four-run top of the seventh against the Little Rock Central Tigers at Buddy Coleman Field.

Those four runs turned a 3-2 lead into a 7-2 victory as the Hornets improved to 14-7 on the season and 7-3 in 7A-Central Conference play. Coupled with Conway’s 14-4 loss to Cabot, the Hornets moved into sole possession of third place in the league, a game behind second-place North Little Rock. Conway fell to 6-4 and Cabot improved to 10-0.

Bryant hopes to continue to beat the teams below them in the standings in order to take a shot at the ones ahead of them. The Hornets host Fort Smith Southside on Tuesday then travel to Cabot on Friday before wrapping up league play against North Little Rock and at Conway the following week.

The top two teams in league play earn first round byes at the 7A State Tournament in Bentonville, which started May 11.

At Central, Scott Schmidt had three hits and two runs batted in with Brandon Hoover adding two singles to back the pitching of right-hander Seth Tucker, who worked into the seventh, walking two and striking out six while scattering four hits. Both Central runs were unearned as the Hornets suffered four errors.

Bryant struck for a run in the first inning when Tucker led off the game with a double and took third on a wild pitch. With one out, Jake Wright drew a walk. Logan Chambers got a bunt down on a safety squeeze and Tucker sprinted home.

In the bottom of the inning, Tucker fanned two in a 1-2-3 frame. The Hornets threatened in the second when Schmidt led off with a double and, with one out, Hoover lined a single to center. Tigers pitcher Jacob Evans-Funk got out of the jam, however, with no further damage.

Central’s first hit was a two-out single by Mason Gresham in the home second.

In the third, the Tigers tied it. Luke Porter drew a lead-off walk and, after Tucker struck out KaJuan Richardson, Aaron Mann singled to left. Another strikeout gave Tucker a chance to escape and he induced a grounder to the right side. Schmidt got to the ball in the hole but Javil Goins beat the throw to Tucker who was covering the first-base bag and Porter scored. Goins made a turn toward second and Tucker got the ball back to Schmidt for the out to retire the side.

Bryant threatened in the top of the fourth. Schmidt singled with one out and Matthew Sandidge beat out an infield hit. The runners moved up on a passed ball as Hoover drew a walk to load the bases. Myers Buck drilled a liner to right and Schmidt tried to tag and score but Garrett Hatfield made the catch and threw him out at the plate.

In the top of the fifth, however, Tucker led off and was hit by a pitch from Evans-Funk. He took second on a passed ball then stole third. With one out, Wright drew a walk. Again, Chambers got a bunt down to get Tucker home.

Logan Grant, running for Wright, took second on the play then stole third before Coby Greiner ripped an RBI double to left to make it 3-1.

In the home fifth, Joey McCracken reached on an error but was thrown out trying to steal by Wright, the Bryant catcher. Porter bounced out to Greiner at short. Richardson followed, however, with a double to right. Still, Tucker was a strike away from getting out the jam unscathed when Mann hit a grounder that was misplayed. Richardson scored and it was 3-2.

Tucker ended it there with a strikeout.

He then retired the Tigers in order in the sixth.

Mann, who had relieved Evans-Funk in the sixth, started the seventh with a strikeout but strike three got away from his catcher and Cameron Coleman reached first safely. Coleman took second on a passed ball before Wright fanned.

Chambers walked but, after striking out Greiner, Mann was in position to end the inning. With Schmidt up, another pitch got away and they moved to second and third. So when Schmidt yanked a single into left, both scored.

Grayson Prince came on to run for Schmidt and, after Sandidge drew a walk, Hoover stroked a bouncer up the middle to make it 6-2.

A walk to Buck filled the sacks and another bad pitch allowed Sandidge to come home with the final run.

Tucker got the first out of the bottom of the seventh then issued a walk to McCracken. Boston Heil came on to relieve and struck out Porter. The count went to 3-1 on Richardson before he beat out an infield hit to keep the inning going. Mann was hit by a pitch to load the bases.

Will McEntire became the Hornets’ third pitcher of the inning but he ended it by striking out Ben Farzley.