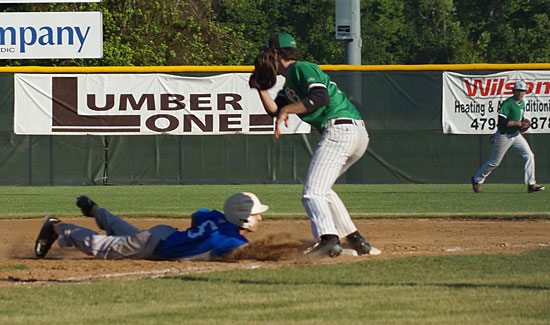 Hornets secure league title, get help toward gaining No. 1 seed for State

VAN BUREN — The Bryant Hornets clinched the 7A/6A-Central Conference championship and regained the inside track to the top seed from among the 7A teams in the league to the 7A State Tournament on Tuesday night. 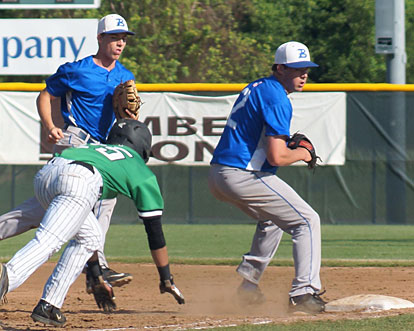 With their workmanlike effort, which produced a 7-1 win over the Van Buren Pointers at Iverson Riggs Memorial Field, the Hornets picked up the league title. Coupled with the Little Rock Catholic Rockets’ 6-1 win over the Conway Wampus Cats, the Hornets moved to within a win of clinching the top seed and the first-round bye at State from the league.

Now that needed win will have to come against those same Rockets, who could forge a three-way tie in the race for the top spot at State with a win. But the Hornets will be at home and celebrating Senior Night this Friday.

Bryant improved to 25-2 overall, 12-1 in the league and 4-1 against 7A members, which are the conference games that count toward the bid to State and seeding there.

The Class 7A State Tournament begins on Thursday, May 12, at Burns Park in North Little Rock.

The Hornets were facing right-hander Noah Miller, who held them to one unearned run on just four hits in the previous meeting between the two teams on April 12 at Bryant. (Bryant right-hander Zach Jackson made that hold up for a 1-0 win.)

This time, however, the Hornets cracked 15 hits, 14 of them against Miller in the first six frames. Lead-off man Logan Allen and second lead-off man, which is what nine-hole hitters have come to be known, in the Major Leagues, Joey Cates combined to go 7 of 9 in the game. Allen had four hits scored a run and knocked one in. Cates drove in a run as well with one of his three singles.

Evan Lee, Garrett Misenheimer and Aaron Orender each had two hits while Seth Tucker delivered something of a game-breaker with a two-run single in the fifth. 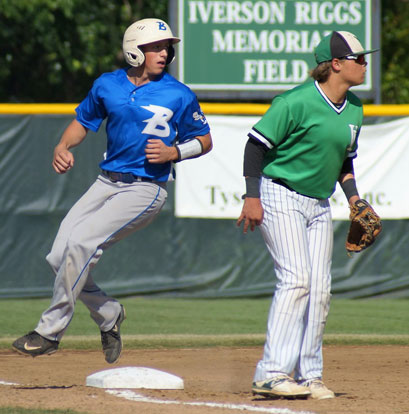 Logan Allen rounds third behind Van Buren’s Trevor Johnson as he looks to see the result of the play at first. (Photo courtesy of Paul Dotson)

Lee picked up the win on the mound with six innings of work. He allowed a run on five hits with one walk and 11 strikeouts. Alex Shurtleff finished with a scoreless top of the seventh.

“I thought we played tremendous defense,” noted Hornets coach Kirk Bock. “The pitching was really good. Great day for Evan. We executed the offense well. We had 15 hits.

“But it was kind of a very business-like win,” he mentioned. “There wasn’t a whole lot of cheering and stuff going on. I don’t know why. They just went to work. And they did exactly what they were supposed to do. I’m very proud of them.”

Bryant took a 1-0 lead in the first inning. Allen led off with an infield hit and Dylan Hurt drew a walk. Lee got a bunt down but Van Buren got a force at second as Allen advanced to third. Misenheimer then came through in the clutch with an RBI single.

Lee worked around a one-out walk to Dillon Jones in the home half but Miller kept it 1-0 despite two-out singles by Cates and Allen.

In the bottom of the second, Trevor Johnson reached on a swinging bunt. Ty Callahan sacrificed him to second then Chase Moore and Jonathan Safanov cracked consecutive singles to get Johnson home.

The Hornets snapped the tie in the third, which Lee led off with a shot to left-center for a double. Misenheimer sacrificed him to third and Jordan Gentry plugged the same gap for an RBI double.

Van Buren threatened to answer in the home third. Jones led off with a single to left and took second on a sacrifice bunt from Ethan Rouser. A rare passed ball allowed Jones to take third with clean-up hitter Jeremiah Douglas at the plate. Douglas slapped a grounder to Orender at first. As he fielded the ball, Orender saw that Jones was down the line at third and threw behind him in time for Misenheimer to apply the tag for the out.

Douglas hustled to second on the play but Lee fanned Johnson to send it to the fourth.

Tucker was plunked by a Miller delivery to open the frame. He took second on a wild pitch and raced home on Cates’ two-strike single to right.

Lee fanned three in the bottom of the fourth, though one of them reached on a third-strike wild pitch. In turn, the Hornets doubled their run total in the top of the fifth.

Misenheimer singled but, with one out, was forced at second on a grounder to short by Jake East. But East hustled to beat the relay to first, keeping the inning alive. He stole second then went to third on Orender’s single to left.

Though Orender left early and would’ve been caught between first and second, Van Buren decided to hold East at third and give Orender second. That put both of them in scoring position for Tucker who laced a 1-1 pitch up the middle. Both scored.

Cates singled to center then so did Allen, driving in Tucker to make it 6-1.

Lee fanned two more as he retired the Pointers in order in the bottom of the fifth. The Hornets then put up their final tally. Lee singled, Misenheimer reached on an error and, with one out, East hit a grounder to third that drew an errant throw to second allowing Lee to score.

In the home sixth, Lee finished his mound work by striking out the side around a one-out double by Johnson.

Shurtleff allowed one-out singles to Safarov and Landry Wilkerson in the top of the seventh but he struck out Jones and got Rauser to bounce to Tucker at second for a game-ending force. 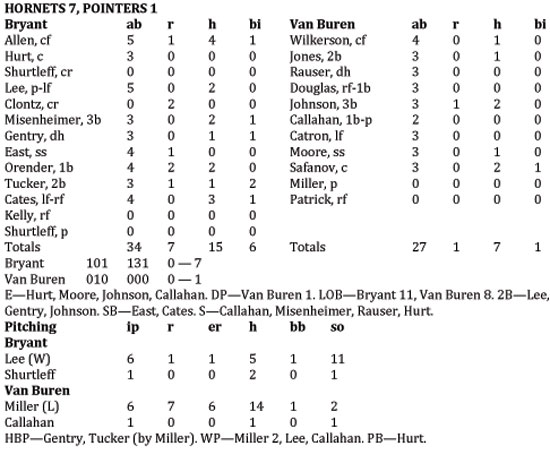