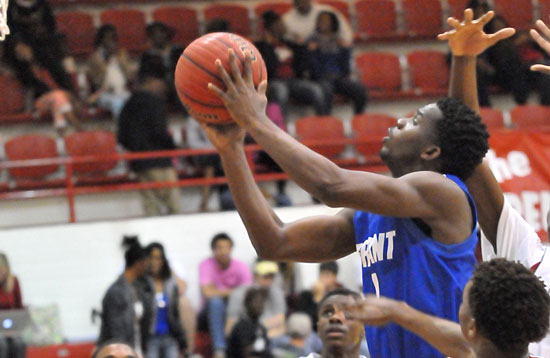 TEXARKANA — There have been times this season when the Bryant Hornets are whipping the ball, breaking down defenses and making shots; when they’re getting after it on the boards and working together and hustling on defense — well, it’s a thing of beauty. 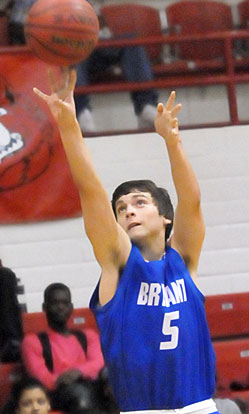 Caleb Strain fires up a 3. (Photo by Kevin Nagle)

And there was a lot of that good-looking stuff Tuesday night when they went on the road and snapped a four-game skid with a 62-48 victory over the Texarkana Razorbacks in which the Hornets led by as much as 25.

The stellar play was sparked by three players that usually come in off the bench but got the start because head coach Mike Abrahamson sat three starters. Senior Caleb Strain, junior Wesley Peters and freshman Desmond Duckworth each made plays for the Hornets in that first quarter that helped set the tone.

Strain, in fact, who fought so hard to come back for his senior season after suffering multiple, debilitating injuries in a tragic auto accident, scored the game’s first points by grabbing an offensive rebound. It would be his only basket of the game but it was the first of three rebounds. He also supplied some of that hustle on defense, at one point, diving headlong out of bounds to try to save a loose ball.

After Texarkana’s Malcolm Elliott tied the game 2-2, Bryant’s sophomore Kevin Hunt drove for a basket that gave the Hornets a lead they’d never relinquish. Hunt would go on to score 7 of his 14 points in that first quarter.

And he got an assist on Peters’ bucket inside among the Texarkana trees that made it 6-2.

And, though Duckworth didn’t score in the first quarter, he would finish with 8 points in the game.

Shimezz Oliver scored off an offensive rebound for the Razorbacks then C.J. Rainey converted two free throws for the first 2 of his game-high 19 points. Hunt followed with a 3 and Texarkana needed a timeout. 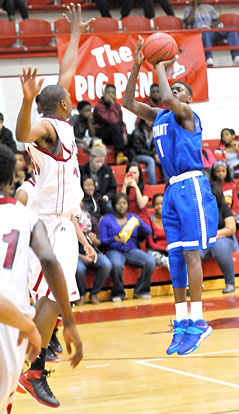 “Seeing Caleb Strain dive for a ball out of bounds, that can’t not energize our team,” Abrahamson asserted. “And that was fun to see. Kevin Hunt played with a ton of energy at the beginning of the game. I thought Desmond Duckworth played a heck of a game. C.J. was C.J. He’s always solid. It was good to see Wesley get in there and get some rebounds and battle in there, go up strong and finish.

“That’s something that we always want to see and it’s something we haven’t had,” he said of the team’s energy. “We had a little adversity (Monday). We ran into some minor disciplinary issues and it brought us together a little bit. So we got down here and got off to a great start.

“We got the guys back in the second quarter that sat out the first quarter and kind of took it from there, kind of took off,” the coach noted. “So it was seamless. The bench was into it. It was fun, fun to play together and play hard and get a win on the road. Hopefully, we can keep it rolling.”

The Hornets improved to 11-12 overall and 7-5 in the South Conference going into their final home game against Lake Hamilton on Friday. They close out the regular season next Tuesday at El Dorado with hopes of playing on in the Class 7A State Tournament in Conway after that.

“I thought the key was the way we moved the ball on offense,” Abrahamson observed. “We got great shots. We were making shots and our defensive energy was up. We weren’t rebounding well at the beginning of the game but we got better in the second quarter.

“You know, that’s a really talented team,” he added, referring to Texarkana. “They’re tough to keep out of the lane, tough to keep off the boards. And we did it. But I thought what set the tone for us in all areas of the game was our ball movement against their zone early. We got some layups. We got some 3’s. We got to the free-throw line a little bit. Then we were able to play with more energy on defense. 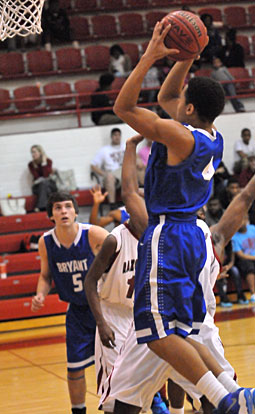 Wesley Peters gets inside for a short jumper. (Photo by Kevin Nagle)

“Then to come out at halftime and hold them to 9 points in the third quarter was big for us. We basically doubled our lead. Then we just kind of held them off in the fourth.”

Bryant led 20-11 at the end of the first quarter. Greyson Giles drove for a basket to start the second period and, after Texarkana’s Landin Galberth scored, hit a 3. Cedarrian Crosby took a charge on defense and, after the lead was cut to 25-17, converted a free throw and got a layup off a feed from Romen Martin.

The Hogs needed another timeout as the lead had grown to 30-17. Giles blocked back-to-back shots by Demetrius Taylor, leading to a layup for Martin off an assist from Hunt to make it 32-18 before Elliott hit a 3 at the buzzer, making it an 11-point lead at the half.

Kendrick Mims scored inside to start the third quarter, cutting the margin to 9. But when Rainey knocked down a 3 in response, Bryant’s lead was never less that double digits.

Rainey and Hunt each turned in three-point plays. Duckworth hit a layup off a dish from Rainey then drained a 3. Rainey scored off a pair of drives and it was 52-30 going into the fourth quarter.

Giles added a free throw and Duckworth scored off a drive to the rack, giving Bryant its largest lead at 55-30.