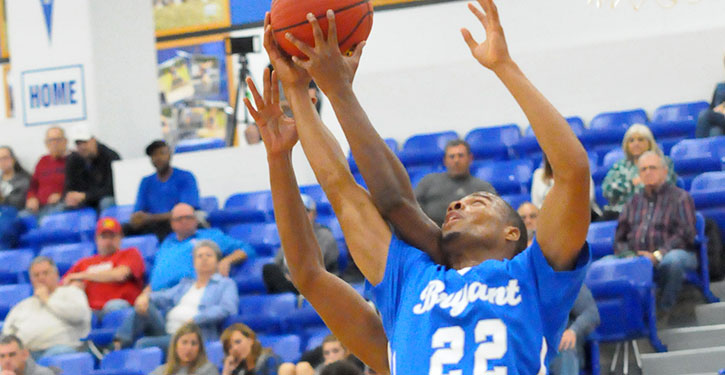 BENTONVILLE — Before the Bryant Hornets’ wrapped up their four-games-in-four-days tour of Greenbrier (on Tuesday) and Bentonville (on Wednesday, Thursday and Friday), head coach Mike Abrahamson expressed his admiration for the Bentonville Tigers, who were hosting the annual Crabtree Invitational Tournament as they loomed on the last day.

The Hornets must be pretty good too because, on Friday night, they drilled the Tigers 58-49 to capture the tourney championship over the previously unbeaten hosts.

“They are a good team. My opinion hasn’t changed,” Abrahamson asserted. “They’re a tough, tough opponent. They shoot it so well. They score the ball so well and they’re really well coached and they seemed to have great kids on the team.

“With all that being said, I’m really proud of our team for — fourth game in four days, all on the road or at a neutral site with the toughest opponent of the four on the last day — we’re all thrilled but we’re all exhausted,” he added. “We all need to rest but what a good trip for us. We just got better every day and I’m really proud of our team for that.

“We just have to keep it up,” the coach said. “It’s only Dec. 1 so we’re going to keep that in perspective and just keep working to get better.”

A back-and-forth game in the first half, the Hornets trailed 21-16 at the end of the opening quarter, punctuated by a long 3 from Michael Shanks, who led his team with 13 points in the game. But they then held the Tigers to 4 points in the second quarter. Bryant went on a 7-0 run to end the half and led 31-25 at the half.

“We didn’t play perfect by any means,” Abrahamson said. “Bentonville scored a lot early. That’s one thing we’ve seen them do to everyone else, so we really made it a point of emphasis to not let that happen to us. And it did but we were able to score with them to stay in it so it wasn’t out of reach, it wasn’t out of hand.”

Deron Canada scored all 11 of his points in the game in the first half and Kehlan Robinson had 9 of his team-high 17. Camren Hunter added 6 of his 15.

“We just had to get comfortable with how we were guarding them and, basically, adjust to what they were trying to do, in how we were guarding them,” Abrahamson explained. “They shoot the ball so well that we had to be right in their face when they caught it. We were able to do that. They usually score a lot of points. I think every game they’ve played they’ve been in the 70’s or 80’s. To hold them to 49 — and really they scored a lot late, the last four minutes of the game or so.”

The Hornets extended the margin to 49-35 by the end of the third quarter and, at one point, led by 18.

“The second half, third quarter, we just really defended well and scored,” said Abrahamson. “I don’t want to say I’m surprised because I know we’re capable of that but I just have a lot of respect for Bentonville. You just never really know quite how it’s going to go until you play it out.

“The only thing I’m really disappointed in was how we finished,” he allowed. “At the end, it never got to the point where they were going to come back and win it but we couldn’t put them away or extend the lead. But part of that was, they’re a good team. They were hitting shots late to bring them back.”

The Tigers never got closer than the final margin of 9.

Regarding his own team’s scoring, Abrahamson said, “We were trying to attack the basket. They were doing a good job of stopping us from driving. So, we’d use a couple of little actions instead of just coming down and driving. We’d work it around, make a couple of cuts, a couple of screens, and then drive.

“So, it was a little bit different type of game,” he mentioned. “The second half against Greenbrier, we couldn’t just drive on those guys. They really clogged it up on us. We still want to drive. That’s what we feel like we do best. We just had to kind of change that up in a different way, get some movement to try to get the defense moving so we could open up our drive.”

As for the defense, Abrahamson said, “I’m just really proud of our guys. We contested their shots well. We didn’t let them get the shots they were wanting.

“Early, they were kind of getting inside our match-up and shooting over the top of us. They’ve got a couple of wings that are 6-5, 6-6 that are going to be Division I players. They’re not really post players but they’re big kids. They’d get it in there and either shoot over us or kick it out.

“Then we were able to score; 58 is good but not as good as we’ve been scoring either but it was enough to, once we got the lead in the second quarter, just kind of keep them at arm’s length and, for a while, more than arm’s length away from us.”

The Hornets got 8 points from Sam Chumley and 7 from Rodney Lambert.

Now 4-0 on the season, Bryant will return to action at the annual Jammin’ For Jackets tourney at Little Rock Hall on Thursday, Dec. 7 at 4 p.m., against Little Rock McClellan.