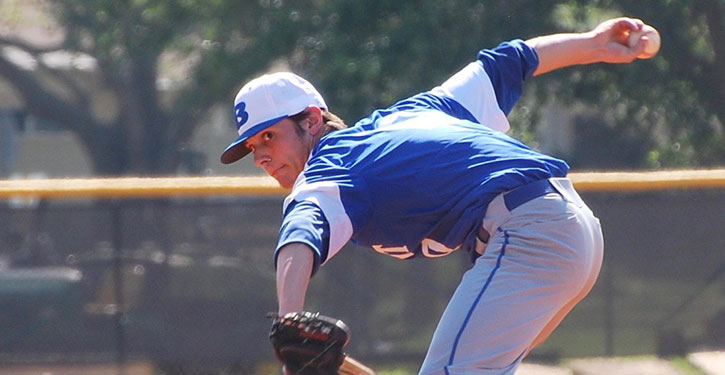 FORT SMITH — Just three games into the 6A-Central Conference schedule, only one team remains unbeaten after Thursday night when Bryant swept a doubleheader over the Fort Smith Southside Mavericks, who came into the twinbill unbeaten in conference.

In the first game, the Hornets scratched out a 5-1 win, led by the stellar pitching of right-hander Will McEntire, some timely execution, and Peyton Dillon’s first home run of the season.

In game two, the Hornets hammered out 16 hits including four by Logan Chambers, who drove in four. Cade Drennan had three doubles and three runs batted in while Logan Grant went 3 for 3 with a walk and Dillon drove in three more. That backed shutout pitching from the combination of Grant and Coby Greiner, who held the Mavericks to just four hits. Grant fanned eight and issued the only two walks Bryant hurlers surrendered in the 13 innings of work. Greiner fanned three in two innings.

The Hornets played two at Southside after they had two home games rained out earlier this season. Mavs’ head coach Dale Harpeneau and Bryant head coach Travis Queck agreed to play both of the teams’ conference contests on the same night to open up another make-up date later in the season when Southside was set to return the trip to Bryant.

“We’ve been backed up with rain,” Queck acknowledged. “I thought maybe it would be a good idea if we just went ahead and played a doubleheader and maybe return that next year, both on both travel dates. Unfortunately, we had to move it to Thursday (from Friday due to a threat of rain) and we’ve got kids going to school tomorrow, but it got us caught up.

“I thought the pitching was really good,” he asserted. “I thought the defense was suspect at times, but I thought, offensively, we did our job. I would’ve liked to have gotten the seven runs, the conference tiebreaker rule runs, in the first game but a win’s a win. I’ll take that.”

In the opener, the Hornets were unable to take advantage of three Maverick errors in the top of the first inning. And, in the home half, Southside scored its lone run of the doubleheader, an unearned tally, that provided the Mavericks with their only lead of the game.

Colton McBride reached on a one-out error, took second on a wild pitch then third on a fly to rightfielder Logan Grant. McEntire, who struck out nine without a walk and scattered six hits, came within a strike of getting out of the inning before Braden Partin singled up the middle for the RBI.

In the second inning, Grant beat out an infield hit, Bryant’s first of the game. Gage Stark followed with a sacrifice bunt that was booted by McBride at third. After Grant and Stark worked a double steal, Dillon came through with a sacrifice fly to tie the game.

“One of the things you do throughout the year is you kind of fine-tune some things,” said Queck. “You see things happen in a game and you go over it and fix it. The guys executed some of that stuff really, really well, as far as knowing situations, sac-flies, sac-bunts.

“The first game we had a couple of infield singles that don’t look pretty,” he added. “Credit their pitcher. He kept us off-balance. The guys found a way to hang in there.”

Southside threatened to score in the bottom of the third. Breck Burris singled to right then McBridge beat out a swinging-bunt. But Schilling hit a grounder to Greiner at short that resulted in a doubleplay to end the inning.

A one-out single by Stark in the top of the fourth led to the go-ahead run. Dillon blooped a single to right then Greiner drew a walk to load the bases with one out. Chambers delivered a sacrifice fly to make it 2-1.

McEntire fanned two during a 1-2-3 fourth. In the fifth, nine-hole hitter Matthew Moore slapped an 0-2 pitch with two away into right for a single. With lead-off man Burris up, Moore left early and was picked off to end the inning.

Bryant’s senior right-hander would finish up retiring 14 of the last 16 Southside batters, eight of them on strikes. Despite a pair of singles in the seventh, McEntire struck out the side. The last five outs the Hornets produced all came on strikes.

Still, it was just 2-1 through five innings. In the sixth, Dillon unloaded on a 1-2 pitch for a solo homer to left to pad the advantage. The Hornets loaded the bases when Chambers reached on an error, Noah Davis laced a single to right and Austin Ledbetter beat out an infield knock. But Southside lefty Landon Chaffin got out of the inning with no further damage. Drennan grounded to third, resulting in a force there.

After McEntire fanned two during a 1-2-3 sixth, Jake Wright greeted a new Mavericks’ hurler, Sam Byars with a double down the right-field line. Grant drew a walk then Stark doubled to make it 4-1. Dillon, who was 2 for 2 in the game with three runs batted in, capped the scoring with his second sacrifice fly of the game.

In the home seventh, Southside’s Partin led off with a single. After McEntire fanned the next two, Caleb Emmert kept the Mavs’ slim hopes alive with a single to right. But McEntire closed out the win with a strikeout.

Grant fanned eight and allowed just two infield hits over the first four innings of the nightcap. Greiner finished with a pair of scoreless frames of relief.

The Hornets grabbed a 7-0 lead in the first inning. They loaded the bases on Chambers’ double, Davis getting hit by a pitch and Ledbetter beating out an infield single. Drennen chased all three home with the first of his trio of doubles.

With one out, Grant walked and, with two away, Dillon popped one down the right-field line that second baseman Ryan Quimbo reached with a dive but could not hold. With the Mavs looking for a foul-ball call, the Hornets kept running. Dillon wound up with a two-run double with Ryan Riggs, running for Grant, scoring all the way from first.

A walk to Greiner followed. Ball four was got past the Southside catcher and not only did Dillon move up to third but Greiner reached first and just kept going, easing into second without a throw.

That set the stage for Chambers’ crowning blow, a two-run single that capped the inning and forced a Southside pitching change as lefty Ryan Hamilton gave way to right-hander Hayden Blythe.

Walks to Davis and Ledbetter loaded the bases but Blythe was pretty tough after that. He ended the first with a strikeout then pitched around a one-out single by Grant in the second and a one-out hot-shot past second by Chambers in the third.

Drennan’s second double into the gap in left-center opened the fourth inning. With one out, Grant singled again then Stark drove in a run with a base hit.

Grant and Stark worked a double steal to get the Hornets a hit away from a 10-run lead and the hope of ending the game after five. Dillon was hit by a pitch to load the bases. Greiner tapped back to the mound. Blythe threw home for a force but catcher Nick Martin’s relay to first, in hopes of an inning-ending doubleplay, was wild allowing Stark to score.

Dillon wound up at third and Greiner followed up by stealing second. With a 9-0 lead and needing just one more run to make it a run-rule win, the Mavs retired Chambers for the only time in the game, on a fly to deep left.

Grant worked around a pair of errors in the fourth on tough slow rollers on the infield. He ended his night on the mound with his eighth strikeout.

Southside’s Carson Doss came on in the top of the fifth and Drennan belted his third double with two away. Needing a single to make it a run-rule lead, the Hornets got a deep fly to left-center from Wright, who just missed knocking it out of the park.

But Breck Burris, the Mavs’ centerfielder hauled the ball to keep Bryant one short of the runs needed.

Greiner allowed singles to Burris and Matthew Schilling in the bottom of the fifth, but he got Partin, the clean-up hitter to foul out to Dillon, who made a nice over-the-shoulder grab running away from the infield to end the uprising.

Bryant got the runs they needed in the sixth as they unloaded on Doss. Grant’s third hit was a single up the middle to open the frame. Stark single to left and Dillon drove in his sixth RBI of the twinbill with a single to left.

Greiner’s base hit chased home Stark to make it 11-0. Chambers capped his night with a two-run triple into the gap in right-center. He scored on a wild pitch before Doss and the Mavericks could get out of the inning.

Greiner eased to a 1-2-3 home sixth, finishing with a strikeout and the Hornets were able to return home to Saline County with a pair of wins in their bat bags.

Up next for Bryant is a showdown at home on Tuesday against the rival Cabot Panthers, who host Little Rock Central tonight.