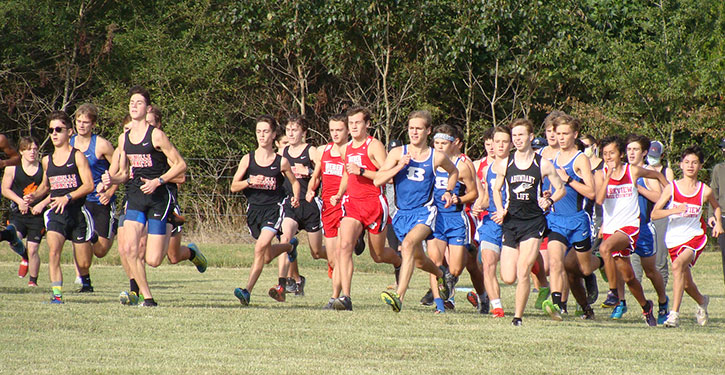 SEARCY — With Bresner Austin, Chris Herrera and Brady Bingaman all finishing in the top 20, the Bryant Hornets won the 19-team Gold Division of the Harding Bison Cross Country Invitational on Saturday.

The Bryant Junior High boys places second among 21 teams in their division with Brandon Avila and Payton Brack finishing second and third behind only Conway’s Max Henry.

The Hornets finished with 75 points. Conway was second in the Gold Division with 91 points followed by Jonesboro (106), Little Rock Catholic (130) and Little Rock Episcopal (151).

“We had a very solid day,” said Hornets coach Steve Oury. “Several runners had personal records.The weather was great, and it was an excellent course that we had never run before.

“I’m proud of how we competed,” he asserted. “Getting the victory is just gravy. I know some of the other teams were not at full strength, but in cross country a victory can never be taken for granted and should always be appreciated. I was hoping to see some athletes take advantage of the conditions and make some breakthroughs, and that’s what we had happen.”

“Bresner Austin led the way for us and looked like his normal self after last week’s struggles,” he noted. “Chris Herrera ran with confidence and looked strong. Brady Bingaman ran a huge personal record, with Jaxon Holt and Mason Lewis also getting new personal records.”

The Bryant Junior High team had 88 points. Vilonia won the team title with 42. Greenbrier was third with 133 followed by Conway (147) and Heber Springs (219).

“Our junior boys did a great job, with Brandon Avila and Payton Brack placing second and third,” Oury said. “Coach Sontreka Johnson and Coach Nicole Bradbury are doing a great job with that group of boys.”

The teams are tentatively scheduled to run in Russellville next Saturday.