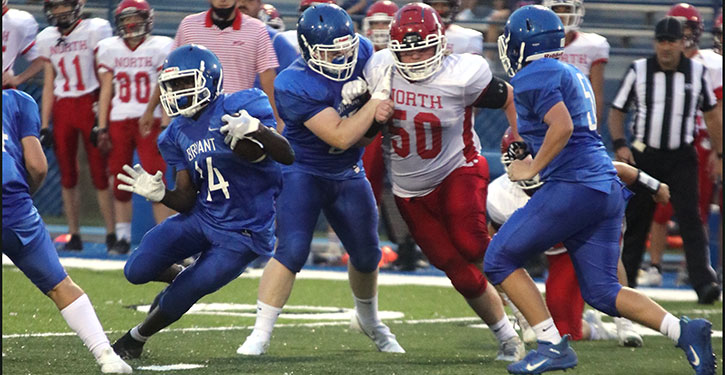 Four of the Bryant Hornets freshman team’s five touchdown drives against the Cabot North Panthers on Thursday night on Everett Field at Hornets Stadium, were set up by turnovers and the Hornets flew to a 35-0 halftime lead that held up for the final score with the second half played under the mercy rule (running clock).

Quarterback Gideon Motes threw for four touchdowns and ran for another. Cason Trickey and Mytorian Singleton each caught two of those TD tosses.

Along with the turnovers, the Bryant defense — including reserves in the second half — allowed just 94 yards of offense by Cabot North.

It was the second mercy rule win in as many games so far this season for Bryant, which plays next on Tuesday at home against Lake Hamilton.

The Hornets actually were stymied on the opening possession of the game. Cabot sacked Motes on second down and the Hornets came up empty on fourth down at their own 38.

The Panthers took over and quarterback Charlie Powell kept for 10 yards but, on the next play, the Hornets sacked Powell, who fumbled. Defensive end T.J. Lindsey scooped up the ball and nearly scored. The Panthers caught him from behind at the 3.

Motes kept from there for the first score. With Jaime Perez’ extra point, it was 7-0.

Cabot North went nowhere on its next series. And, on a third-and-11, Singleton intercepted Powell’s pass and the Hornets were 60 yards from another touchdown. After the Panthers knocked two running plays for losses, Motes went to the air again on third-and-14, finding Singleton behind the secondary for a 64-yard touchdown that, with Perez’ PAT, had the Hornets up 14-0 midway through the first quarter.

Cabot North’s frustrations continued on its next offensive play, a handoff to running back Hayes Cox. The ball was once again knocked loose and this time, Alex Martin, another defensive lineman, picked it up at the 31.

Motes kept for 12 yards from there but, moments later, the Hornets faced a fourth-and-9 at the 17. This time, Motes found Trickey on a short toss that he ran into the end zone. Perez kicked it to 21-0 with 2:49 left in the half.

Cabot North’s next possession lasted four plays and picked up a first down on the running of Powell and Gunner Poe. But from the Bryant 40, Powell went to the air again only to have Harold Lynch intercept at the 24.

Bryant’s quick strike offense scored again. On first down, Motes threw to Trickey on a screen pass and the Hornets’ speedster turned it into a 76-yard touchdown play. Perez’s extra point had the Hornets ahead 28-0 going into the second period.

The Panthers actually held the ball long enough to punt on the subsequent possession. A second down pass completion was stopped for 1 yard by linebacker Hang Penfield then Lindsey sacked Powell.

Trickey returned the punt 7 yards to the Panthers’ 39, giving the Hornets another short field to work with. James Martin started one way on a carry then reversed field and sprinted 18 yards and, a play later, Motes and Singleton connected for a 20-yard touchdown.

Reserves played from that point on for Bryant. Late in the game, Matthew Elder recovered a fumble for the Hornets. Aaron Hernandez provided the offensive highlight with a 38-yard run.

“We cleaned up a lot from last week,” said Hornets head coach Kenny Horn, referring to a 36-6 win at Warren. “We really executed. Everybody did well. We threw the ball well, caught the ball well. Defense played hard and got a few turnovers and we capitalized. Anytime you can do that, you’re going to be okay.

“I was really happy that we had just one penalty,” he noted.