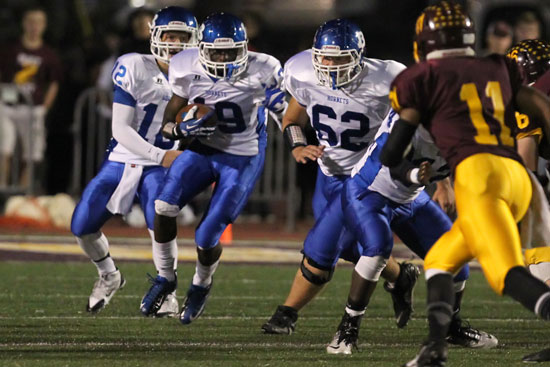 PEARCY — On offense, the Bryant Hornets refused to be tackled and, on defense, they refused to be blocked on Friday night. In the first half alone, the Hornets piled up 353 yards of offense while holding the Lake Hamilton Wolves to a net of just 19 stripes. The result was a 42-7 lead at the half and a running clock in accordance with the Sportsmanship Rule to start the second half. 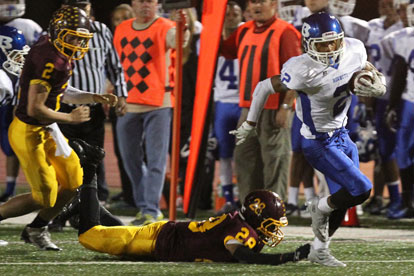 Brushawn Hunter (2) leaves Lake Hamilton defenders including Donnell West (28) in his wake on the way to a 200 yard night of total offense. (Photo by Rick Nation)

It was a far cry from what most would expect from two teams going into week 9 of the season tied for first place in the conference.

Bryant wound up with a 49-14 win, duplicating the final score from a season ago when it was the Hornets who were celebrating Senior Night as the Wolves were on Friday.

The victory sets up a duel with the El Dorado Wildcats next Friday for the 7A/6A-South Conference championship. Both teams are 5-1 in league play. The Wildcats downed Benton 35-0 on Friday to keep their share of first place.

Too, thanks to Springdale Har-Ber’s upset win over Fayetteville, the Hornets will being playing for a shot at a first-round bye in the Class 7A playoffs, which commence Friday, Nov. 15, then a home game on Friday, Nov. 22, as a number two seed.

Junior Brushawn Hunter accounted for 207 yards of offense and three touchdowns. He rushed eight times for 110 yards and hauled in five passes for 97 yards. Kylon Boyle picked up 77 yards on the ground, Savonte Turner picked up 43 yards on eight tries and Devonte Howard, running the Wildcat, contributed a key 34-yard scamper on the Hornets’ first touchdown drive.

“Our backs have really stepped up,” said Hornets coach Paul Calley. “Coach (Dondre) Harris has done a get job with those guys, getting them ready to play. They are running the ball downhill and playing really well.”

Defensively, the Hornets forced four turnovers and made tackles for losses 10 times including three sacks for Austin May and two for Jarron Wade. 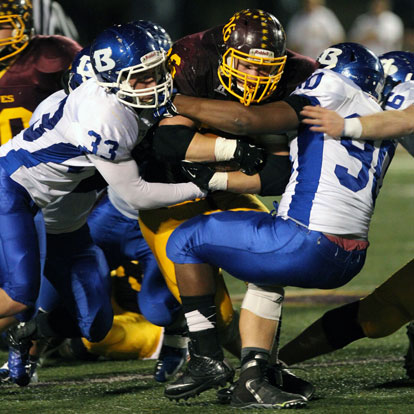 May, as well as Hunter Fugitt, led the team with six tackles. Tanner Rich had five, Wade and Davis Nossaman four each. Rich recovered a fumble as did Peyton Robertson. Jake Johnson and Drew Tipton each picked off a Lake Hamilton pass.

The defense ran its stretch of quarters without giving up a touchdown to 17 in a row. (Lake Hamilton’s first half score came on a kickoff return.) The Wolves ended that streak with most of their starters in the game playing against Bryant reserves at the :23 mark of the fourth quarter.

“I thought our defensive line played really well stopping the trap, getting pressure on the quarterback,” Calley related. “We were worried about the quarterback getting loose. He did a couple of times but we contained him. We sacked him and that was big.

“Our defensive coaches did a great job of game-planning,” he asserted. “They had our guys ready to play and, coverage-wise, they were where they needed to be. The defensive line just got off blocks. They were fighting to get to the quarterback.”

Bryant stunned the Wolves (and not a few of its own fans) by rolling to a 35-0 lead midway through the second quarter. The Hornets wound up scoring on six straight first-half possessions after going three-and-out on the first series of the game.

“They were playing a lot of the same players that they played last year except they are a year more experienced, bigger and stronger,” Calley said of Lake Hamilton. “The speed difference in our skill players was really evident.”

Bryant used a new formation to get Hunter freed up to make plays, lining him up as the H back as well as tailback and having him run pass routes out of the backfield. It created mismatches in the Lake Hamilton coverage.

“Our offensive coaches did a good job of game-planning for that, to get him in positions to get the ball in the open field as well as running,” Calley acknowledged. He also praised his offensive line of tackles Cameron Davis and Caleb McElyea, guards Jacob Ward, Josh Earls and Zach Jacksons as well as center Kurt Calley. 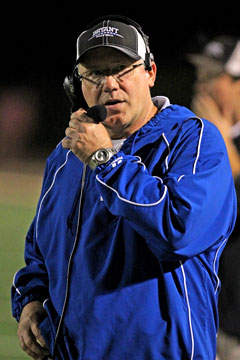 “Our offensive line is kind of patched together but those guys are on the same page,” Coach Calley said. “They work together. We didn’t get a lot of movement tonight but we stuck to people and moved our feet, giving our backs the chance to make cuts.”

Despite getting good field position from Bryant’s stalled first series, the Wolves were unable to pick up a first down and had to punt it back to the Hornets. Lake Hamilton didn’t manage a first down until early in the second quarter. Half of the eight first downs, in fact, came on the last possession of the game.

The first scoring drive of the night began in an unusual way. Quarterback Brandan Warner’s pass was tipped at the line of scrimmage by a Lake Hamilton d-linemen. Thrown off its trajectory, the ball ricocheted off the hands of Austin Vail and into those of Hunter who hugged the sideline out to the 31.

A play later, Turner slashed 20 yards into Lake Hamilton territory. Howard’s big run overcame a procedure penalty, reaching the 13. Hunter sliced 11 yards to the 2 and Boyle scored from there.

Moments later, Lake Hamilton faced a third-and-9 at its 33 and Sawrie overthrew his intended receiver down the middle. Johnson tipped the ball into the air and came down with it to put the offense back in business at its own 48.

On short runs by Turner, Hunter, Boyle and Warner, Bryant drove to the Lake Hamilton 26. And, on a play-action pass, Warner found Hunter down the seam for another score. With Alex Denker’s extra point, it was 14-0 going into the second quarter.

The Wolves got to run two plays on their next series. On the second play, Sawrie was separated from the ball and Rich recovered 42 yards from paydirt. Two plays later, Boyle busted loose on a 37-yard TD run and it was 21-0.

It was at that point, Lake Hamilton picked up its initial first down on a keeper by Sawrie. On the next play, however, Wade made a sack and, before lone, the Wolves were punting the ball back to the Hornets.

A 32-yard pass from Warner to Hunter put them within 14 yards of another score. The same duo connected, making it 28-0.

A sack of Sawrie on a third-down play forced a punt from the 29-yard line. Boyle dashed for 11 yards and a first down then, on the very next play, Hunter broke outside for a 54-yard touchdown jaunt. With Denker’s kick, it was 35-0 with 5:54 left in the first half.

It was at that point that Nazario picked up a squib kick at his own 16 and laced his way through the Bryant coverage for Lake Hamilton’s first score.

The Wolves tried to get the ball back with an onside kick and appeared to have it when Chris Eastburn fell on the ball but it was ruled that the ball had been touched by the Wolves before it went the requisite 10 yards. As a result, Bryant had time to drive for an answering touchdown.

Hunter’s 29-yard sprint set it up. He picked up 8 and one of the Lake Hamilton players took a swing at the Hornets’ playmaker. As result, a personal foul was tacked onto the run and a Wolves player was ejected from the game. From the 3, Turner scored and it was 42-7.

Lake Hamilton put together a couple of first downs with Sawrie connecting on three consecutive throws. But when they reached the Bryant 42, on consecutive plays, Sawrie was sacked.

With the clock running straight through due to the “mercy” rule, Lake Hamilton drove to the Hornets’ 38. Again, however, Wade got a sack on second down and May got another one on third down.

Drew Tipton had an interception to stop the Wolves’ next series. On their third possession of the half, the Hornets jarred the ball away from Hunter Lipton and Robertson claimed it for Bryant with 9:57 left.

The Hornets drove for a final score keyed by the running of Michael Martindale and Drew Alpe. A procedure penalty threw off the advance but only briefly. On a first and goal from the 13, Schroeder kept on a rollout and found Jacob Gorham for the 6.

The Wolves used nearly all of that time to drive for a cosmetic score against Bryant reserves. Jess Ledbetter led the march at quarterback, capping it with an 11-yard toss to Levi Rengstorf.