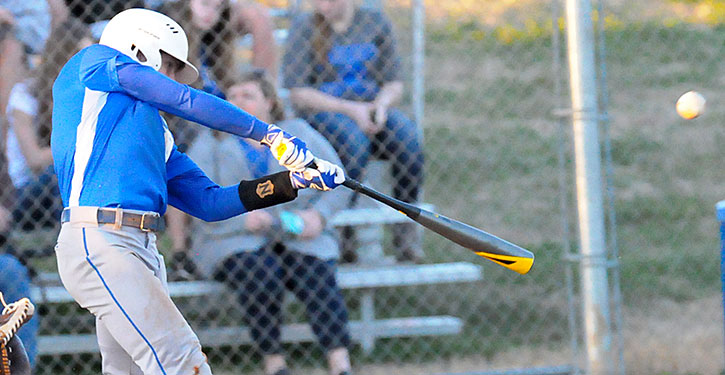 Hornets win a laugher and a thriller in Texas

WAXAHACHIE, Texas — Scott Schmidt came through for the Bryant Hornets again, this time with his bat.

Schmidt’s rocket over the head of the centerfielder with one out in the bottom of the sixth drove home Jake Wright with the winning run as the Hornets came from behind to defeat the Trinity Trojans of Euless, Texas, at the Waxahachie Classic on Friday afternoon.

The victory competed a two-game sweep for the Hornets on Friday. Earlier, they downed the Birdville Hawks, 9-2, with six innings of strong pitching from Myers Buck, who was backed by nine hits including two each by Schmidt, Peyton Dillon and Logan Chambers.

So, that’s three wins in a row after a season-opening 1-0 loss at Hot Springs Lakeside. They’re set to wrap up the tournament on Saturday.

“They are competing,” reiterated Hornets head coach Travis Queck. “I’m proud of the pitching so far from guys we will need. Offensively, we still have a ways to go, but they are getting a better mentality about them.”

The Hornets trailed the Trojans 5-2 going into the bottom of the fifth when they rallied to tie the game. Dillon, who came in to get out of a jam in the fourth, shut out Trinity in the fifth and the sixth and earned the win.

Bryant’s game-winning home sixth began with a walk to Wright — his third of the game. Matthew Sandidge got a bunt down and beat it out for a hit. Brandon Hoover sacrificed them to second and third then Trinity intentionally walked Coby Greiner to load the bases for Schmidt.

Cade Drennan started the game on the mound for the Hornets. In the first, he worked around a pair of hits and a walk by picking off the first baserunner. In the second, however, Trinity plated two runs to take the lead. A one-out error opened the door. A single by Nike Tratree put two aboard. Ian Mason grounded into a force at second, but the Hornets couldn’t get a doubleplay so, with runners at first and third, an infield by Daniel Childs made it 1-0. A second run scored on a double by David Van Vooren before Drennan got the final out on a fly to left.

In the third, Braden Knight took over on the mound and Trinity tacked on a third run. A single, a double and a hit batsman loaded the bases. With one out, an error got the run home. But Knight struck out Mason and got Childs to tap to first.

The Hornets got on the board in the home third. With one out,Wright walked and Sandidge was plunked by a pitch. Courtesy runner Logan Grant stole third and Sandidge followed into second. Hoover came through with a sacrifice fly to make it 3-1 then consecutive walks to Greiner, Schmidt and Dillon forced in a run.

Christian Motes relieved in the fourth for Bryant and struggled. A hit batsman and a pair of walks loaded the bags. Dillon relieved and gave up a sacrifice fly to Angel Suarez and an RBI single to Kris Velasquez as the lead grew to 5-2.

Dillon fanned Trantree then got the final out when Laki Ellis grounded to short.

Mason led off the fifth with a single, but Dillon picked him off first. He pitched around a two-out error in then set down the side in order in the sixth.

Meanwhile, the Hornets tied it in the bottom of the fifth. Greiner walked but was forced at second on Schmidt’s grounder to short. With Buck in to run for Schmidt, Dillon lined a single to center. Grant came in to run for him and, with two down, Logan Chambers drew a walk to load the bases for Austin Ledbetter. The freshman shortstop drilled a double to left that cleared the bases to knot it up. Ledbetter was thrown out trying to get to third to end the inning.

Buck allowed three hits and a walk over five shutout innings. He fanned six. Brayden Lester relieved in the sixth and surrendered Birdville’s two runs on four knocks and a balk. But he forced the Hawks to strand two when he got Connor Rowe to fly to Greiner in center and Andrew Galvan to foul out to Chambers.

Bryant got on the board in the top of the second when Sandidge reached on an error, taking second as the ball got through the Birdville first baseman. He took third on Hoover’s sacrifice bunt and scored on Greiner’s sacrifice fly.

Buck pitched around an error in the first then held the line despite a pair of singles in the home second. He retired the side in order in the third as he started a stretch where he set down eight in a row.

Bryant struck for four runs in the top of the fourth. Sandidge led off with a single and Hoover was hit by a pitch. Both advanced on Greiner’s sacrifice. Schmidt drove both home with a liner to right for a double.

Dillon singled to put runners at the corners for Gage Stark. He got a sacrifice bunt down and reached safely when the pitcher misplayed the ball as Schmidt scored to make it 4-0.

Chambers lined a shot to right for an RBI single and it was 5-0.

In the fifth, Wright walked and, with one out, Hoover was struck by a pitch. Greiner drew a walk to fill the sacks for Schmidt who got a run home with an infield hit. Dillon blooped a single to center to get courtesy runner Noah Davis in. Greiner followed on Stark’s bouncer to short.

Birdville managed a single by Galvan and a walk to C Feris with two down in the bottom of the fifth but Buck got Petty to bounce out to Schmidt at second.

The Hornets tacked on one more in the top of the sixth. Ledbetter doubled and Wright beat out a bunt hit. With one out, Hoover got a squeeze bunt down to make it 9-0.