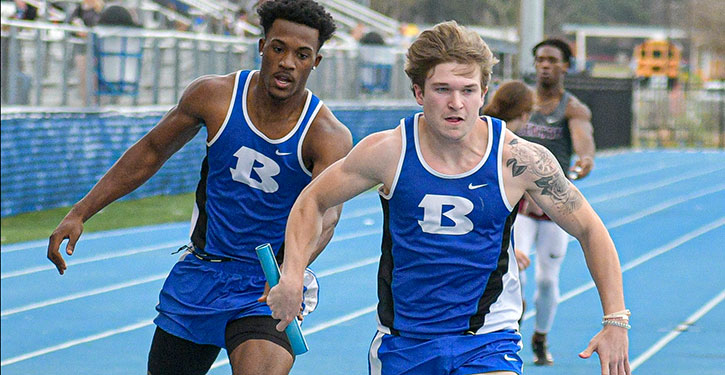 CABOT — After the Bryant Hornets beat out the Cabot Panthers at the annual Hornet Relays a few weeks ago, the Panthers turned the tables at their home meet, the Walmart Cabot Invitational track meet on Tuesday.

“The boys were disappointed to not pick up another victory, but I was pleased with a lot of the performances,” said Hornets head coach Steve Oury. “We shuffled the lineup quite a bit so that athletes could get meet experience in events they don’t normally do. When the conference meet comes around, I want them to be comfortable in any event that we might ask them to compete in. While it may have cost us a few points in this meet, I feel we can gain from it down the road.”

“Kaleb Knox set a new season best in winning the 300 hurdles,” Oury noted, “and did a great job in his first triple jump of the season.”

The relays were highlighted by the 4 x 100 quartet of Allen, Kyle Knox, River Gregory and Kaleb Knox. Their 43.02, which beat out Conway (44.35) was a State qualifying time.

Gregory and Brumfield had second-place finishes as did the other two relay teams.

Brumfield was second in the high jump, clearing 5’10”. Darius Eason of Little Rock Central got over 6’0” to win the event. Bryant’s Nasir Vincent was fourth at 5’6”.

Josh Mellor cleared 10’6” in the pole vault to earn third-place points. Caden Hope was fourth at 9’6”.

“Kyle Knox in the 100 and Gabe Allen in the 200 both ran big season best times,” mentioned Oury.

“Overall, there were a lot of positives we can take from this meet,” Oury asserted.

Bryant is scheduled to return to competition at the North Little Rock Relays on Tuesday, April 13.