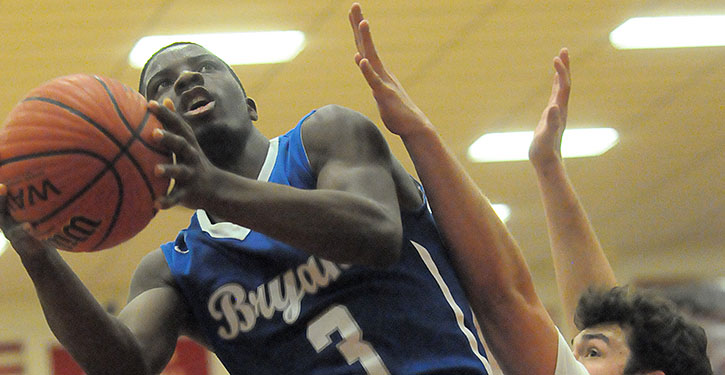 Hot-shooting Grizzlies bring season to a close for Hornets

VAN BUREN — Sometimes, a first-round bye at the State tournament leaves a team a little rusty. Just ask the defending Class 7A champion Cabot Panthers who, after a first-round bye, got knocked out of the tournament on Friday as Springdale Har-Ber became the only 7A-West Conference team to post a victory in the tourney.

But the Bryant Hornets didn’t have such luck.

Unfazed by the layoff, the Fort Smith Northside Grizzlies arrived at Clair Bates Arena on Friday blazing. Tre Norwood, Tevin Brewer and Isaiah Joe each hit 3-pointers before the Hornets could score. Those were three of five in the opening stanza for the Griz, six in the first half and nine on the night.

The Hornets, who have spent a lot of time doing so this season, found themselves playing from behind, a physically, mentally and emotionally taxing chore.

Though they kept after Northside the right down to the end of the game, the Hornets never led as their season concluded with a 69-56 loss, their third of the season to the Grizzlies who scorched the nets at a 55 percent clip.

Brewer, who finished with a game-high 25 points, hit a trio of 3’s, a couple of which were from close to 30 feet out.

Bryant was able to keep Joe to just two 3’s in the game after he hit nine by himself in Northside’s 69-67 win in overtime against the Hornets on Feb. 3.

“We know that they do that,” acknowledged Hornets coach Mike Abrahamson of the Grizzlies’ bombardment. “It’s not like it’s uncommon. They’re amazing and they were on fire tonight. You’ve got to give them credit. I don’t think there’s much we could’ve done.

“They’re so hard to defend,” he continued. “Obviously, we know about the two studs (Brewer and Joe) and you try to make the other kids make the plays. And they do. You try so hard to take away Brewer. He’s so good, you can’t. He’s virtually unguardable.”

The Hornets hung with them in the first half but the Grizzlies ended the half with a 3 from Demichael Whitfield then put together a 12-2 surge in the third quarter to build the lead to as much as 20. The Hornets trimmed the lead to 14 on a couple of occasions midway through the fourth quarter but Northside converted 12 of 13 free throws down the stretch to keep Bryant at bay. The final score was as close as Bryant would get.

“You know our kids didn’t give up and I’m proud of that,” Abrahamson said.

The Hornets finished 18-11 on the season and the seniors — Calvin Allen, Garrett Cowart, Romen Martin, Christian McIntosh, Marvin Moody, Braylen Steen, Kaleb Turner and Lowell Washington — became the first group to be a part of three consecutive winning seasons since, at least, the mid 1980’s; maybe ever (official records are incomplete for much of the ‘80’s and anything before the 1977-78 season). They were part of teams that accumulated a record of 54-32 over those three years including three State tournament wins.

“I heard about them when I first got the job,” Abrahamson recalled. “My first year, they were in sixth grade and people would tell me how good they were and about how they were going to be the best group to come through Bryant in a long time. Those people were right.

“It didn’t end the way we wanted it to end but we won a lot of games over three years, made a lot of memories,” he added. “It ends tonight losing to a great team that had a phenomenal performance.

“All you can do is be your best,” the coach concluded. “I’m proud of them for what they’ve done over the last three years and I hope they’ve made Bryant basketball relevant in Central Arkansas and in our own community. They’ve done things like generate bigger crowds, more exciting environments. Because of their performance, we’ve been invited to do a couple of things that Bryant teams haven’t been able to do like play in Jammin’ For Jackets.

“We’ll miss them. It’ll be different without them, that’s for sure.”

After falling behind 9-0, the Hornets battled back, starting with a 3-pointer of their own from junior Sam Chumley. Brewer was fouled shooting a 3 and converted two free throws before the Hornets put together a push.

Martin scored off a drive then combined with Chumley on a steal that led to a layup for Steen. Another turnover led to Moody’s bucket off the offensive glass to make it 11-9.

But Brewer sparked the Grizzlies. He finished with 19 of his 25 points in the first half. He banked in a 3 then fired in a 28-footer to make it 19-9 before Allen made a nifty play, driving to the bucket to beat the buzzer and scoring despite being fouled. With no time on the close, he added the free throw to make it 19-12 going into the second quarter.

Allen was the lone Bryant player to reach double figures with 21. Steen had 8 to go with 10 rebounds. Martin, Chumley and Washington finished with 6 each and McIntosh, in off the bench, contributed 5.

Steen hit a 3 to start the second quarter, trimming the margin to 4 but Northside scored the next 8 points to stretch the lead to 12. It was 34-22 at the half.

Washington scored the first bucket of the third quarter off a nice feed from Steen before Joe’s drive started Northside’s third-quarter blitz. He added a 3 then so did Jackson Forsey to make it 42-24.

Allen interrupted with a drive to the rack. The lead grew to 20 on back-to-back buckets by Tyrell Perry as Martin had to come out with four fouls. Steen drilled a 3 and Allen popped a pull-up jumper from 12 to trim it to 26-31 but Brewer answered.

With :14.8 left in the quarter, Joe went to the line shooting the bonus. The Hornets had been cited for seven fouls in the half already. Northside had yet to be whistled for a single one.

Joe’s free throws made it 50-31 going into the final eight minutes.

McIntosh scored off a steal by Allen early in the fourth. The teams started trading points. The Hornets made up some ground by answering Northside’s 2’s or free throws with 3’s. Allen hit one and, later, McIntosh splashed one to make it 59-45 with 4:33 left.

A three-point play by Perry was the response for Northside. Washington blocked a dunk attempt by the Grizzlies’ Kwashea Taylor and Martin drove for a layup. Tre Norwood hit a free throw but missed the only one Northside would miss in the final quarter so when Allen drove for a basket, it was 63-49 with 3:31 left.

Brewer added two free throws and, after a Bryant miss, put on a ball-handling exhibition. The Hornets tried to trap him but he kept working his way out of the traps or avoiding them altogether.

He was finally fouled with 1:58 left and tacked on two more free throws to extend the margin to 18. Continuing to scrap and scramble, Bryant got within 13 before the Grizzlies ran out the clock.

Now 21-7, Northside will take on Har-Ber in one semifinal tonight. The other semifinal pits two more Central Conference teams, North Little Rock and Little Rock Central, who had some incredible battles during the conference season. 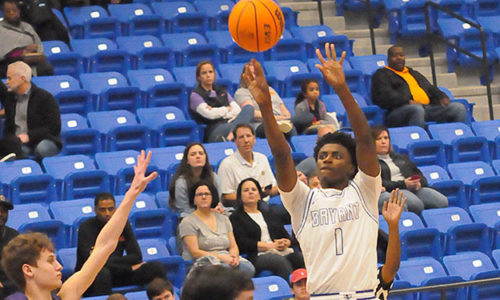