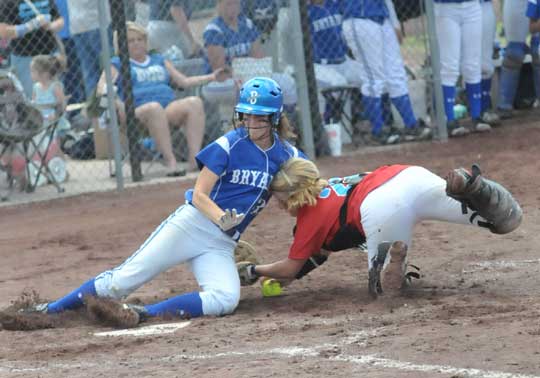 CABOT — Peyton Jenkins allowed just four hits and two of those were erased by doubleplays as the Bryant Lady Hornets began their bid for a return to the Class 7A State championship game with a 3-0 win over the Fort Smith Southside Lady Rebels on Monday.

Cassidy Wilson had two hits and scored twice for the Lady Hornets who improved to 23-2 on the season.

They will play 7A-Central Conference rival Cabot for the third time this season on Tuesday at 6 p.m. in the semifinals with the survivor advancing to the State title game in Fayetteville on Saturday, May 22.[more] 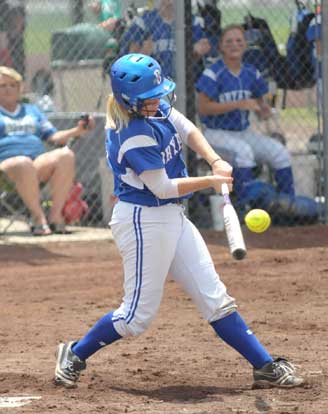 Last year, the Lady Hornets made it to the finals but lost to league rival North Little Rock.

Jenkins struck out six, walked just one and hit a batter. Southside only managed to get a base runner to second twice. Neither got any further.

“I was proud,” declared Bryant head coach Debbie Stepp of Jenkins’ performance. “She’s been working so hard. She’s had a lot of struggles and she has come through like a trooper. She did everything I asked her to do.

“I was excited about (the doubleplays),” she added, crediting assistant coach Elliott Jacobs. “Imagine what that does for my pitcher. It’s something we do work on. If we want it to happen in a game, you’ve got to work on it in practice.”

Bryant played errorless defense otherwise with Wilson turning in a splendid play at short with two out and two on in the bottom of the fifth to help preserve the shutout. She also started a doubleplay in the top of the seventh that took the starch out of Southside’s rally hopes after Madi Jordan had led off the inning with a single to left.

Bryant took a 1-0 lead on Southside’s Alexsis McCain in the first when Wilson singled off the pitcher’s glove, Jenkins singled up the middle and Jessie Taylor looped a base hit over the second baseman to load the bases. A wild pitch allowed Wilson to score before McCain and the Lady Rebs worked out of the jam with runners at second and third.

After Jenkins worked a 1-2-3 second, part of a run of seven in a row she set down, the Lady Hornets nearly got another run. Ashley Chaloner walked, Kelsie Works bunted her to second and, with two down, Jenna Bruick’s roller to short drew a wild throw. The ball went down the right-field line but was tracked down by first baseman Alison Thomas who got it back to the plate just in time for a play. Though Chaloner may have gotten in under the tag (as a photo seemed to indicate), she was called out to end the inning. 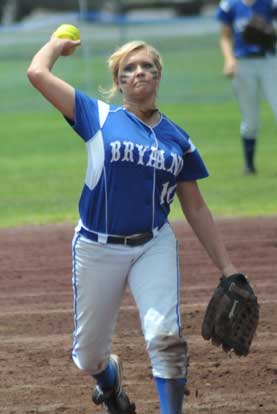 But the Lady Hornets took more advantage of another scoring opportunity in the third. Wilson got things going again with her single to right. She took second on a wild pitch and, with one out, held at second when Taylor’s sharp one-hopper was booted at third.

A single to left by Kayla Sory loaded the bases and a wild pitch allowed Wilson to score as Shanika Johnson was working for a walk with an eight-pitch at-bat.

With two down, Kelsie Works slapped a low liner to the third baseman’s left. Though Southside’s Kylie Ballard tried to make a diving stab to catch the ball in the air, she couldn’t hold on and McKenzie Rice, running for Taylor, crossed home plate with the third run.

Hannah Rice battled McCain for nine pitches in an effort to get another run home but she eventually popped to short to end the inning.

Bryant only had two more baserunners the rest of the way. Wilson walked with one down in the fourth and Chaloner doubled with two down in the fifth.

But Jenkins and the defense made it hold up.

“We got that early lead and that was it, but it was enough,” Stepp stated. “You can’t win at zero so I was proud. They did a good job. Southside was a good team. We hit the ball and we had people on base. We just didn’t move them the way we needed to, but (McCain) did a good job pitching and they made some good plays.”

Kacie Ballard ended Jenkins’ string of outs with a single to lead off the fourth. After Kylie Ballard flew out to Works in center, McCain cracked a bouncer to Johnson at third who started an inning-ending doubleplay that ended with Sory making a nice scoop of a short-hop throw to first. 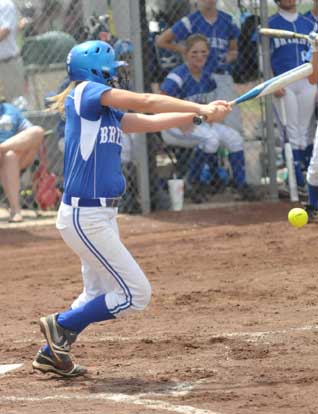 Southside’s best chances to score came in the fifth and sixth. The fifth began with Jenkins’ lone walk of the game to Jordan. An illegal pitch allowed her to take second but Jenkins didn’t allow it to bother her as she struck out the next two batters. On a 3-2 pitch to Megan Howard, she hit the batter to put runners on first and second. Jasmine White hit slow roller towards short that Wilson charged and fielded quickly. She gunned a throw to Sory just in time for the final out of the inning.

In the sixth, Kacie Ballard belted a shot down the line that glanced off the tip of Johnson’s glove and rolled into foul ground for a double.

But Jenkins got Kylie Ballard to fly to left then fanned McCain to end the inning.

The game had originally been set for Saturday but inclement weather forced the postponement after the Lady Hornets had reached Cabot.

“I felt like we were a little excited and antsy because we got to the field on Saturday and we were ready to play,” Stepp mentioned. “That’s what concerned me. I didn’t know if we had too much adrenaline going. But the girls came out and did a great job.”