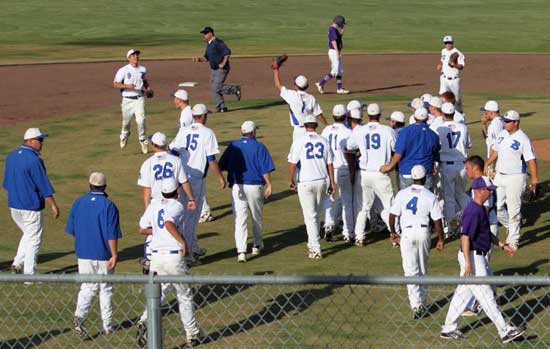 FORT SMITH — Caleb Milam got his groove back. Jordan Taylor got his swing back. And the Bryant Hornets[more] are back — in the Class 7A State championship game. 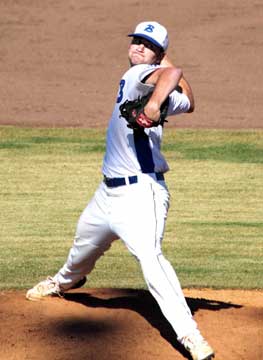 With Milam holding the Little Rock Catholic Rockets at bay after coming in to relieve starter Dylan Cross, the Hornets overcame a 6-2 deficit for a 7-6 win on Monday evening at Crowder Field at the University of Arkansas-Fort Smith.

He was the winning pitcher on Saturday, however, and, on Monday, he wound up getting the save by relieving Milam with two on and two out in the top of the seventh and striking out Catholic’s Drew Price.

The Hornets, now 23-7, will meet 7A-Central Conference rival Conway in the championship game at UCA this Saturday at 5:30 p.m. Bryant will be attempting to win back-to-back State titles. It’s the first time Bryant has played in consecutive State championship games and just the third time overall.

The loss was an excruciating one for the Rockets who were denied a berth in the State finals by the Hornets for the second year in a row. Both times, it was by a one-run difference. In 2010, Bryant ousted them, 1-0.

Conway reached the finals with a 9-0 win over Rogers Heritage, the regular-season champion of the 7A-West and the last team from their league still standing.

Twenty-two games into the season, Milam sported a 6-2 record with a 2.55 earned run average. But, on a day when high winds were blowing out in Russellville, he had a rough outing. And in two appearances on the mound since then, he struggled to the point that his record had fallen to 6-4 and his ERA had expanded to 4.06.

But, after the last regular-season game, a loss to Lake Hamilton, Bryant head coach Kirk Bock had a meeting with his hurler and told him the team was going to need him at State, to be ready.

And Monday, with his team trailing 6-2, he was called out of the bullpen with runners at second and third and just one out. He proceeded to issue a walk on a 3-2 delivery to Josh Cissell that loaded the bases. But when then he got Nick Battisto to pop to short and Logan Wewers to line out to center where Josh Pultro made a lunging catch to end the inning. 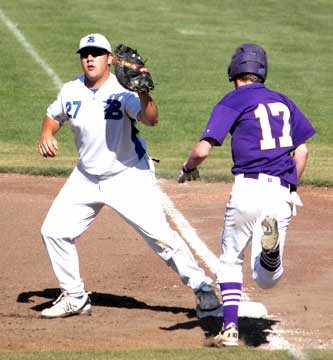 That started a stretch in which he retired 10 in a row. He shut out the Rockets until, an out away from victory, he issued a pair of walks on 3-2 deliveries. Bock then brought in Taylor who, after throwing 78 pitches in the Hornets’ win over Cabot on Saturday, needed just four to end it.

“For Caleb right there, it was all about gaining some confidence,” Bock stated. “He knew he could do it. He’d just been shell-shocked a couple of times, you know? He started doubting himself a little bit. That was one of the things we talked about. And he told me, ‘I know I can do it.’ He said, ‘Just keep plugging me in.’ I said I was going to.”

Asked about what he was thinking when he came in, Milam said, “I just said that, you know, one game and we’re out right here. This is it. This is our last game if I don’t do good. I need to try my best and that’s what I did.

“I was just thinking I needed to come in and just not let my teammates down,” he added. “My mindset was I’ve got to go in there (angry) and I’ve got to shut them down and let my team hit the ball. That’s what I tried to do and they did.”

“He did a fantastic job, just tremendous,” Bock emphasized.

The Hornets still trailed 6-4 going into the bottom of the sixth. But they’d made starter Taylor Wallace, who also started the Rockets’ game on Saturday, throw some pitches. In all, 95 through five frames.

Lefty Will Ogles relieved in the sixth and, after a long battle, Lucas Castleberry got the winning rally started with a liner to right-center for a base hit. Chris Joiner waited out a walk. Evan Jobe came up to sacrifice and, with two strikes, got a bunt down only to have Ogles bounce off the mound to field it in time to throw to third for a force on Castleberry.

But Hayden Lessenberry stroked a single up the middle to load the bases for the top of the batting order.

It appeared the Hornets had a run when Tyler Nelson was hit by a pitch. But it was ruled he’d leaned into the strike zone to get hit and he was called back to the plate. Ogles managed to strike out Nelson but then, with Brown coming to the plate, Catholic head coach Dustin Strube took the lefty out and brought on Conner Gilmore, a right-hander, to face the right-handed hitting Brown. 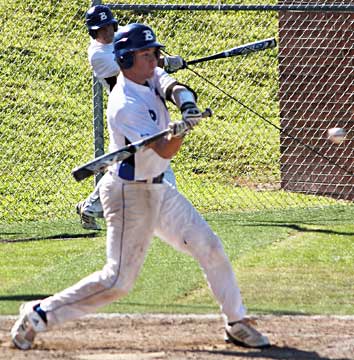 But the move backfired. Brown drew a four-pitch walk to force in a run, making it 6-5. Taylor, after fouling off a 2-2 delivery, shot a single up the middle to drive in Jobe and Marcus Wilson, running for Lessenberry, to put the Hornets ahead.

Brown was thrown out trying to reach third but the Hornets were just three outs away from returning to the State championship game.

Milam struck out the first two before issuing the two walks that led to Taylor’s insertion.

“I was too excited there at the end and I couldn’t finish but J.T. came in there and got the job done,” Milam acknowledged.

“You know, he hadn’t been that deep in a game in a while,” Bock mentioned.

At the start of the game, Catholic took the lead when Allen Mays singled and Blaine Tanner pulled a 1-2 pitch over the fence in left for a two-run homer.

Cross rebounded and got out of the inning and, in the bottom of the inning, Nelson singled, took second on Brown’s sacrifice and, on an 0-2 pitch from Wallace, Taylor yanked one out to tie the game.

Wallace gave up a two-out single to Landon Pickett but escaped with the game deadlocked.

Cross’ struggles escalated in the top of the second. He hit Wewers with a pitch and, after McKay sacrificed courtesy runner Joe Friend to second, he hit Price. Lead-off hitter Nick Rougeau drew a walk to fill the bags for Mays, who slapped a two-run single to left. An infield hit by Tanner loaded the bases for clean-up hitter Matt Morris who went oppo with a liner just past Pickett who was drawn-in at first.

Cross gave way to Milam at that point and the Rockets would not score again.

Bryant whittled on the lead. In the second, Jobe was hit by a pitch, Lessenberry walked and, with two out, Brown looped a single to right-center to bring Jobe home, making it 6-3.

In the bottom of the third, Milam was hit by a pitch and courtesy runner Hayden Daniel took second on a short passed ball. With one out, he raced to third on a grounder to short by Castleberry and he scored from there on a wild pitch to make it 6-4.

Wallace worked around a two-out walk to Nelson in the fourth.

In the fifth, Milam retired the first two but Wewers and McKay cracked singles. Price then hit a bouncer that Brown ranged behind the bag to gather in. His long throw was in time thanks to a nice stretch at first by Pickett to retire the side.

Taylor was robbed of a hit to start the bottom of the fifth and Wallace had his lone 1-2-3 inning.

Nick Rougeau led off the top of the sixth with a single and he stole second. But Milam fanned Mays, got Tanner to foul out to the catcher, Lessenberry, then struck out Morris to keep it 6-4 going into the game-turning home sixth.

“Once we went down 6-2, I said, ‘Look, guys, all we’ve got to do is score a run an inning and we’re going to win 7-6,” Bock related. “We scored a couple and then we went blank so we had to make up for a couple of those. We had a plan at the dish and the kids executed the plan flawlessly. We got (Wallace) out of the game.”

During the regular-season, the Hornets had edged the Rockets and Wallace, 3-2, with a seventh-inning rally that sewed up the league’s regular-season championship and the No. 1 seed for State.

Interestingly enough, the Hornets have not faced a single 7A-West team during their State tourney runs to consecutive title games. In fact, they haven’t faced a West team at State since 2008 and that was Van Buren before the Pointers joined the Central Conference.