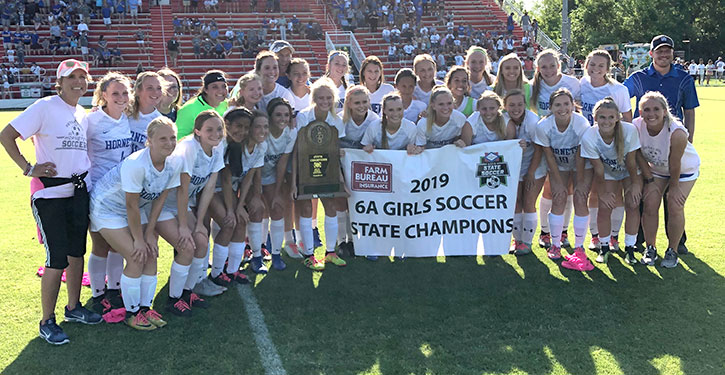 They did it again in 2019 and, on a pair of first-half goals by MVP Alyssa Fason and extraordinary ball control in the second half, the Lady Hornets earned their second State championship, 2-1, over the rival Conway Lady Wampus Cats, who had pinned both of Bryant’s regular-season losses on them.

“Conway has a great team,” Lady Hornets second-year head coach Nicole Inman. “We knew that there was honestly more pressure on them because they had won two games against us already. We had nothing to lose.

“It’s hard when it’s hot,” she mentioned. “Last weekend, it was cold then all of a sudden today, we’re sweating. But, I’m really proud of the ladies just for coming out and working hard and not quitting.”

That initial goal came less than five minutes into the match. Fason drilled it from the right side with Ashton Inman earning the assist.

Just over 10 minutes in, Ashton Inman got a shot away, but it was saved by Conway keeper Reagan Graff.

Conway was awarded a free kick at the 19:21 mark of the half and Kailyn Pavatt laced it just under the crossbar and over the extended hands of Bryant keeper Addison Funk.

At 16:31, however, Bryant was awarded a penalty kick after Fason was fouled in the box. She drilled her shot into the upper left corner of the goal and what turned out to be the final score was on the board.

Each team would finish with 14 shots. Bryant had eight on target with six saved by Graff. Conway had three on target and Funk saved two of those.

For much of the second half, Conway struggled to get any real threat going. In the first eight minutes, the Lady Cats had a corner kick that Carly Umholz headed wide. Pavatt had a free kick but Funk saved it.

Fason had a shot saved by Graff then combined with Rachel Studdard work it in close. Graff deflected the ball in front of the goal and it laid there tantalizingly. But the Lady Hornets were unable to get to it before Graff smothered it.

With 22:29 left, the Lady Hornets had a corner kick from Abbey Inman that was deflected inside the box and caught by Graff.

Bryant began to dominate possession down the stretch. When Conway would get into scoring range, the Lady Hornets did a nifty job of just clearing the ball deep into the other end to make them back up and try to put something together anew.

“The seniors wanted to win before they graduated, and the other ladies wanted to give it to them,” Coach Inman related. “We’ve gone through a lot of changes the last couple of years. Last year was a stepping stone for us. I had all the confidence that we could come back here and win.”

Of course, the Lady Hornets wanted to win for their coach too. Inman has been battling brain cancer. She noted that, during last spring’s championship game, she had no idea about it. She found out in the weeks following. Despite intensive therapy, Inman maintained.

“I have been surrounded by some wonderful ladies who have served me so well,” she said of her team. “I have coaches who do things for me and think of things.

“A lot of people don’t want to ask other people for help,” Inman reflected. “They want to do things themselves. I’m way beyond that.

“I’m signing up everybody to help because I know that this doesn’t function as well as it used to,” she said with a finger to her temple. “I’m very thankful that, when I get on the soccer field, my mind works, and I know what I’m doing. Other times, I may forget words and forget life and forget what’s going on. But I’m thankful that, when I get on the field, it’s all there.”