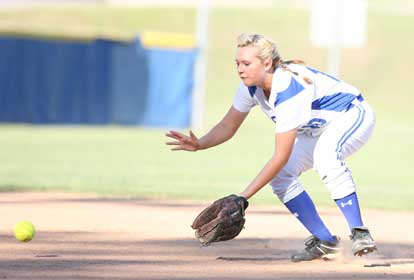 With the arrival of pitcher Teraka Cowley, a transfer from Texas, the Conway Lady Wampus Cats are making a late-season push not only towards qualifying for the Class 7A State softball tournament but for a higher seed than the sixth and final spot.

A quality pitcher can make that kind of difference.

On Tuesday, May 4, Cowley limited first-place Bryant to just six hits but she was outdone by the Lady Hornets’ Peyton Jenkins who fired a one-hit shutout at Conway to help her team notch its 20th win of the season, 3-0, and keep a share of first place going into a showdown at Cabot on Thursday.[more] 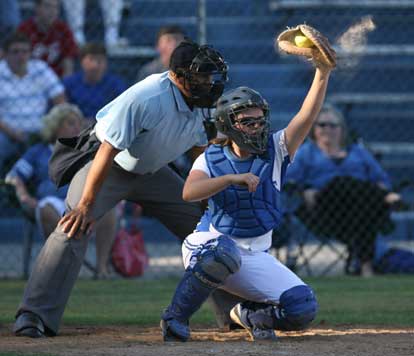 Taylor Kuhn singled with one out in the sixth inning for Conway’s only hit of the game. Jenkins struck out six, hit a pair of batters and worked around a couple of errors during the game.

She also helped herself with two hits. For most of the game, the run she scored in the first was the only one. Bryant took advantage of a pair of Conway errors in the sixth to add two insurance runs and set the final score.

Bryant had defeated Conway 16-0 earlier in the year. 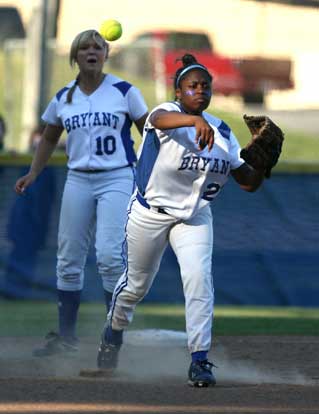 “Their move-in pitcher (Cowley) makes their team better,” acknowledged Lady Hornets head coach Debbie Stepp. “She makes their defense better because there’s not as many balls being put into play. Her team has a lot of confidence in her and she can also swing a bat. So she brings a lot to their team.

“My girls had heard about her,” she continued. “They heard she played for the Texas Glory team. So, again, we had a mental battle like we’ve had. We made a couple of mistakes defensively but Peyton did a good job pitching her way out of it. J.T. (catcher Jessie Taylor) did a good job calling the game for us.

“On offense, we had the bases loaded in the third with one out but couldn’t score,” the coach mentioned. “We’re just going to have to keep working.”

“We’ve really talked about that because of some of the other weaker teams in the conference that I felt like we’d mentally overlooked,” Stepp explained. “And I don’t think we did, because of (Cowley).” 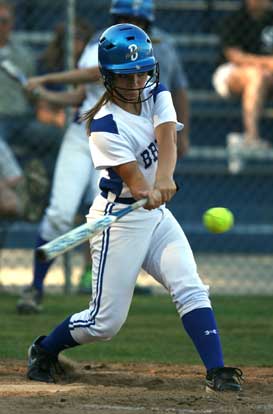 Conway threatened to score in the first inning. Chelsea Cowles reached on an error but was forced on a tap back to Jenkins by Morgan Setzler. But then Jenkins hit Kuhn and Cowley to load the bases with one out.

She promptly struck out Jordan Yardell and got Hannah Cooper to bounce to Cassidy Wilson at short for a force to end the inning.

Those two last outs started a stretch in which Jenkins and the Bryant defense retired 15 Lady Cats in succession.

In the bottom of the inning, Jenkins rapped a two-out single, advanced to third on a pair of passed balls and scored on a solid single to center by Taylor.

Bryant’s threat in the third began with a slap single to left by Jenna Bruick. Wilson sacrificed her to second then Jenkins singled, taking second when the throw in from the outfield came home to keep Bruick from scoring. Taylor drew a walk to load the bases but Cowley fanned the next two to escape with the game still 1-0.

Jenkins’ streak ended with an error with one out in the top of the sixth. Setzler reached on the play then Kuhn broke up Jenkins’ no-hit bid.

With runners at first and second and one out, Jenkins struck out Cowley and got Yardell on a comebacker to preserve the shutout.

Taylor reached on an error to start the bottom of the inning. Brittney Ball served as a courtesy runner but was forced at second on Kayla Sory’s grounder to third. Shanika Johnson followed with another roller to third but the throw to first was wild and sailed down the right-field line. Sory hustled all the way around to score and Johnson sprinted all the way to third. Ashley Chaloner brought her home with a groundout to set the final score.

Jenkins worked a quick 1-2-3 seventh and the Lady Hornets had win No. 20 overall and their fifth straight since losing at North Little Rock.