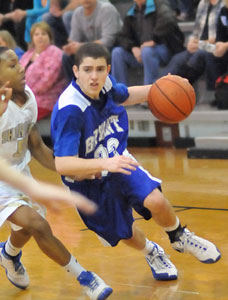 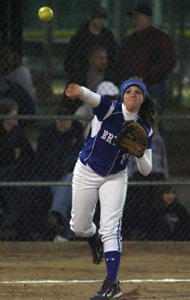 GREENBRIER — Jonathan Parks hit a tip-in at the buzzer and the Bryant Hornets freshman basketball team advanced to the semifinals of the Central Arkansas Junior High Conference Tournament with a 39-37 edge-of-your-seat victory over the rival Sheridan Stingers on Monday, Feb. 16.

Unfortunately, things didn’t go as well for the Lady Hornets who fell victim to a late charge by the hosting Greenbrier Junior Lady Panthers. The 47-37 loss ended Bryant’s 18-7 season. For details, see below.

The game against Sheridan, another South Division team, came down to the last seconds just as their Jan. 22 meeting at Bryant had, when the Hornets survived 23-21.[more]

“We didn’t play that well,” stated Hornets coach Steve Wilson. “But Sheridan did a great job of keeping us from running our offense.”

Sheridan, the lowest seed from the South Division, had come into the game after stunning North Division champion Searcy, 42-28, in the opening round on Saturday. Bryant had advanced past Conway White, 49-37. 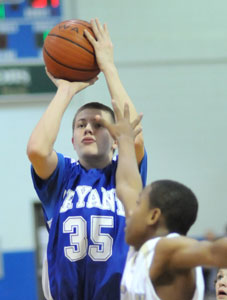 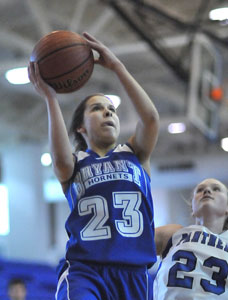 The Hornets trailed through much of the game. Sheridan held a 9-8 edge after a quarter and expande

With the ball and a 2-point lead, the Hornets were working the clock with less than a minute left in regulation when Sheridan came up with a steal and a basket to tie the game with :25 on the clock.

Wilson called a timeout to set up a play only to have Sheridan break it down defensively.

L.J. McLaughlin still got a good shot away with about :06 to go. It rimmed out, however, only to have Cody McPherson collect the carom. In traffic, McPherson launched a follow that rolled out. But there was Parks with the game-winning tip.

McPherson led the Hornets with 13 points.

“Cody kept us in the game,” Wilson asserted.

Parks finished with 11 and McLaughlin 6 as the Hornets improved to 16-9 on the season.

The Lady Hornets led 11-8 after a quarter and by as much as 8 in the second quarter before Greenbrier rallied within 20-19 at the half. The teams traded baskets in a furious third quarter with the Lady Panthers nudging ahead 32-28 by the end of the quarter. Bryant was within 3 with 2:30 left to go but a half-court trap helped Greenbrier force a couple of turnovers that led to layups at the other end. The Lady Panthers hit their free throws at the end to close it out.

"We came out in the first half and I thought played really well," commented Bryant coach Eric Andrews. "We put up 20 points in the first half. Now, I wish our defense had been a little bit better. I felt like we were going a good job against their best player and if we could continue to hold her points down that we might be able to extend the lead. But then they had some girls that don't normally score for them, step up big and make some shots.

"We just couldn't get stops in the third and fourth quarter," he added. "We were matching baskets with them until late when they went to that trap and my girls just kind of panicked a little bit and we threw the ball away. Those layups were definitely the difference in the game."

"We held their best player to 8 points," noted Andrews. "She didn't score a basket in the second half. We kept losing one girl and she kept making those shots. One that doesn't normally do it. You wouldn't figure she would beat you."

"I thought these girls worked pretty hard and I think they had a pretty good season," he stated. "I think we got so much better throughout the year. We had some players that started playing with some confidence, started making some shots that they were not making early in the season. If you look back to the second week of the season, we're shooting 17 or 18 percent. Once we started gaining confidence, that never happened to us again. I think that's a tribute to them and how they worked at it."