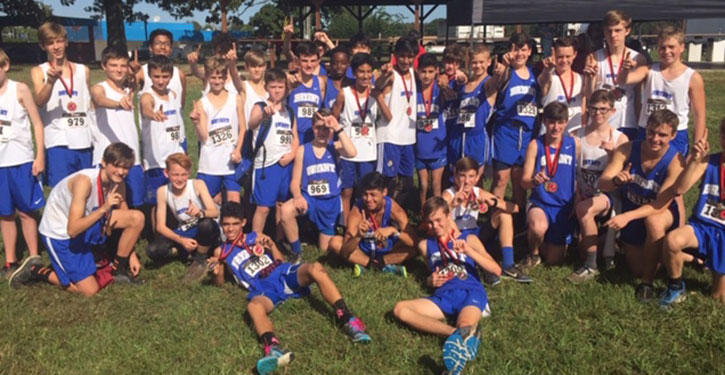 CABOT — The Bryant Junior Hornets concluded their season with a victory on Saturday at the Walmart Central Arkansas Junior High Championship meet. Bryant had the first four finishers across the line and scored 19 points to easily capture the title. Cabot was second with a total of 62 points, while Conway was third with 89.

“This was a perfect way to end the season,” said Bryant coach Steve Oury. “We always enjoy competing at this meet, and, for our junior high teams, this is the meet we point toward. It’s always nice to compete at your best at the end of the season, and that’s what we have been doing.

“Chris Herrera took control of the race early and cruised,” the coach said. “He will compete for the senior high team on Monday at the 6A-Central Conference Championship meet at Bishop Park. Jaxon Holt ran his best race of the season, while Drew MacIntire and George Terry really helped us gain complete control of the team race.

“I’m very proud of all the boys who competed,” he concluded. “Coach Denise Smith at Bethel Middle School has done a great job with her athletes, as has Coach Deanna Porter at Bryant Middle School. Coach Lisa Dreher has been invaluable to Coach (Keith) Dale and I at the high school, helping out with the ninth graders especially.”

The senior high conference championship meet (6A Central) will be held Monday at Bishop Park. The girls will run at 3:45 and the boys at 4:30.