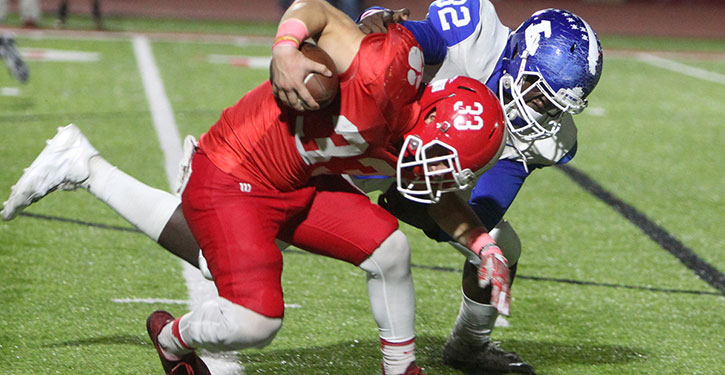 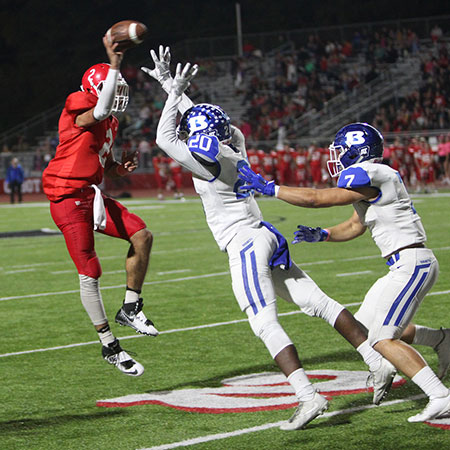 CABOT — Almost everybody was wondering what the heck was going on. Who had the football? Where’d it go?

In a desperation try to keep their hopes of upsetting the top-ranked Hornets, the Cabot Panthers used a very old trick play — the “fumble-rooskie” — in the closing seconds of their game on Friday night.

“I thought it was illegal now but evidently it wasn’t,” said Bryant head coach Buck James after the game. 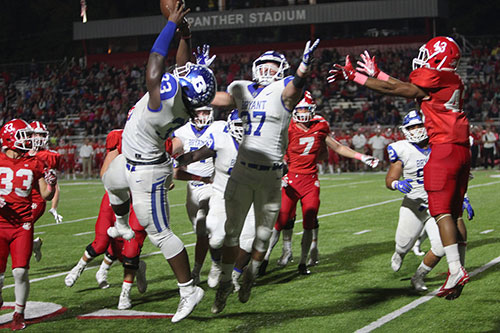 Trailing 17-10 with a fourth down at the Bryant 48, Cabot center C.J. Long ran a fake snap, touching quarterback Tommy Oaks’ hands but keeping the ball and placing it back on the ground. Long acted as if he was going to make a cut block and, on all fours, he left the ball on the ground and covered it up. Left guard Ryan Travis fell on top of him to further hide the loose ball without either of them possessing it.

Meanwhile, Oaks and two backs and all the other blockers ran out a fake option run to the left, away from the ball.

The play was designed to get all the defenders to rush off after the fake and, when the coast was clear, Flores would approach his teammates who were covering the ball, pull it out from under them and run the other way with no one else noticing.

But Wallace, trailing the play, saw what was going on, just like he did when the Panthers ran the play on the first snap of the possession when he was the only one there and kept running back Graham Turner to a 5-yard gain. 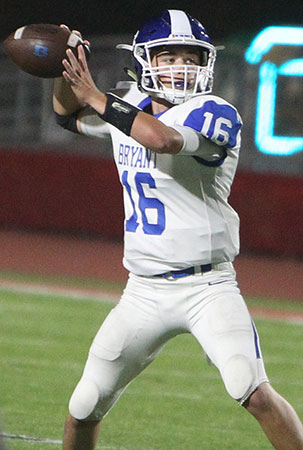 Jake Meaders completed 19 of 30 passes for 249 yards and a touchdown. (Photo by Rick Nation)

This time, he grabbed Flores and pulled him away as he was reaching for the ball. Flores couldn’t hang on and the ball got loose. Smith alertly pounced on it, foiling the Panthers’ last gasp and pinning down the hard-earned 17-10 victory for Bryant, which improved to 8-0 on the season, 5-0 in the 7A-Central Conference.

The Hornets will host No. 2-ranked North Little Rock, also unbeaten, next Friday for a homecoming showdown with a little payback in mind. The Hornets have now won 15 of the last 17 games since early last season with the only two losses at North Little Rock, including the semifinal game that ended Bryant’s 2016 season, a win away from playing for a State championship.

As it turned out, the Hornets wound up beating the Panthers at their own game on Friday — with ball control. As in most games that Cabot plays that don’t get out of hand early, every possession becomes precious. The Hornets only had five in the entire game but they wound up with a time-of-possession advantage, keeping the ball over 25 minutes to Cabot’s 23.

“We were hoping for at least a 10 to 12 possession game,” James said. “If you had told me that we were going to have a five-possession game? I would’ve said we were in trouble.

“So, to win it with only five possessions — I think Cabot played really well,” he continued. “I think we got a different version than what a lot of other people have gotten.” 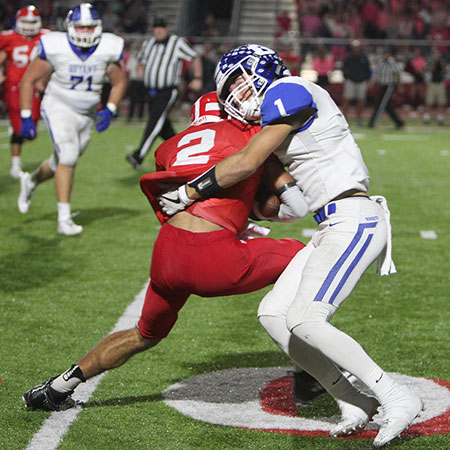 Bryant cashed in on three of those possessions and threatened to score on the other two, missing a field goal on the last play of the first half when their drive stalled at the Cabot 18.

In the second half, they made a bid to make it a two-score lead with a long drive that reached the 17. But a pair of holding penalties pushed them back and they punted from the Cabot 40 with just over three minutes left.

Actually, the Hornets punted on a third down. On the second penalty, the officials forgot to roll the down marker back to repeat second down. An incomplete pass made it third down but the down marker read “4” and the punt ensued.

That started Cabot’s last chance. It was going nowhere too after Nate Wallace’s stop on the first “fumble-rooskie” and a halfback pass from Flores to tie end Ayden Shurley that lost 4 yards. But when Shurley got up after being drilled near the sideline by Johnny Wallace, he had a few choice words and the Hornets reacted with a pair of players giving him a shove. Flags were thrown and it looked like it would be the usual result of such tussles, off-setting unsportsmanlike conduct penalties. After a long discussion, the officials cited Bryant for that penalty then much to the surprise of most everyone, the signal for the second unsportsmanlike conduct penalty was also pointed at Bryant.

The result was a 30-yard mark-off that turned a third-and-9 for the Panthers at their own 21 into a first down at the Bryant 49 with 2:03 left to play. 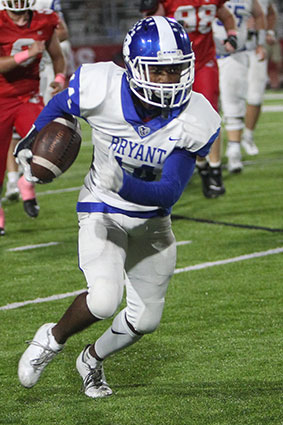 Brandon Murray heads upfield with one of his eight receptions. (Photo by Rick Nation)

Looking to pass, Oaks got what he could on a rollout, stepping out of bounds after a gain of 3. On second down, trying to surprise the Hornets, a handoff on a dive to the lone back was wiped out for no gain by the middle of the defense led by tackle Kajuan Robinson. He and Johnny Wallace then dropped Oaks for a loss on an option setting up the final play.

Offensively, the Hornets were phenomenal in the clutch, converting 10 of 15 third-down plays. And, of the five they didn’t convert, they converted three fourth-downs including a pair on their own end of the field.

Another thing that’s imperative when you’re playing Cabot is scoring first and staying ahead. With so few possessions, if a team falls behind the Panthers, every one of them is magnified even more.

Bryant gained the upper hand with a fine opening drive of 83 yards in 13 plays. Sophomore quarterback Jake Meaders complete 5 of 7 passes in the drive. Meaders would finish the game 19 of 30 for 249 stripes and a touchdown.

Scott wound finish with 125 yards on the ground and 37 more on three pass receptions. 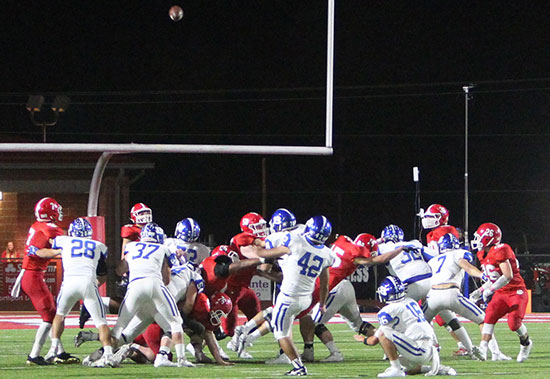 The Hornets reached the 17 and, on a third-and-9, Meaders fired to Brandon Murray at the 5. Murray ran it in from there to make it 6-0. Martin Ramirez added the extra point.

The first of Cabot’s five possessions resulted in a field goal. The Panthers drove to the Bryant 9 but an errant pitch cost them 7 yards then Oaks was driven down for a loss by linebacker Jakob Neel.

On fourth-and-14, Cabot turned to kicker Mason Martin for a 35-yard field goal but, though the kick went through, the Hornets were flagged for a roughing the kicker. Bryant safety Cameron Vail nearly blocked the kick but landed well short of the tee. On the follow-through, however, Martin put his kicking foot down, felt Vail at his feet and flopped over him to draw the penalty.

But the Bryant defense, which held Cabot to 183 yards of total offense forced them to settle for a field goal again. Martin just had enough to clear the crossbar from 25 yards out. 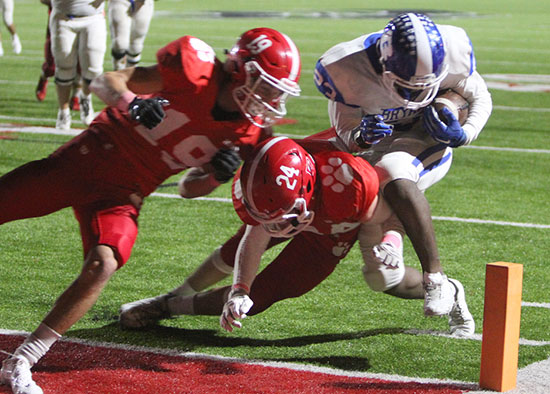 LaTavion Scott (23) bowls over Cabot’s Justin Nabors (24) to score what proved to be the decisive touchdown in the third quarter. (Photo by Rick Nation)

Bryant answered with its own long drive. A penalty on the kickoff return had the Hornets pinned at their own 8 and, on first down, Meaders, trying to pass, was flushed from the pocket and did well to avoid a safety, diving out to the 2.

But he followed up a play later, with a 13-yard scramble, setting up a fourth-and-one at the Bryant 17. Eschewing the punt, James and offensive coordinator Kirk Bock had the Hornets go for it. Scott and the push of the offensive line got it down. Three plays later, it was fourth-and-1 at the Bryant 27 and, again, Scott got the first to keep the drive going.

“I really felt like the game was going to be a less-than-eight-possession game at that point and I knew every one of them was important,” James explained. “And I knew if we punted the ball to the 50, if we stopped them we’d be right back in the same boat we were in.

Later in the drive, the Hornets faced a third-and-5 at the 49. Meaders had to scramble away from pressure and somehow got a pass down the sideline to Randy Thomas for 28 yards.

Bryant eventually reached the 17 but, when Scott was stopped on a third-and-4, Ramirez was called in. He drilled a 32-yard field goal to make it 10-3.

The Hornets held the Panthers to just one first down on the subsequent possession and forced their only punt of the night. With 2:57 left and two timeouts, the Hornets got the ball at their own 21 and promptly drove to the Cabot 18. The big play was a 17-yard strike from Meaders to C.J. Wallace then a 14-yard pass to Ja’Kalon Pittman to convert a third down.

With time running out, Ramirez came on to try another 35-yard field goal from the left hash but it was wide and the 10-3 score held at half.

In the third quarter, it looked like Cabot was on its way to tying the game. A strong kickoff return by Flores started the Panthers at midfield. Ramirez slowed Flores down and James Polite hauled him down from behind.

It was three-yards and a cloud of rubber pellets (on the artificial turf) as Cabot marched to the Bryant 17 where, on fourth down, Oakes rolled right, got pressure in his face and tried to shot-put a pass to T.J. Rogers. But, hustling out from defensive end Johnny Wallace reached high and intercepted.

Taking over from the 15 with half of the third quarter gone, Bryant used up most of the rest of it driving for what proved to be the decisive score. The first play of the drive was a sack of Meaders back to the 8, so the drive actually covered 92 yards.

The Hornets converted two third downs. From the 14, a third-and-11, clicked when Pittman hauled in a 14-yard pass. On third-and-10 from the 28, Meaders found Murray for 18. And when a third-and-3 at the Cabot 36 was stopped, Meaders and Pittman hooked up for 17 yards to the 20.

Scott laced his way through the Cabot defense for the touchdown on the next snap.

Cabot answered, driving 74 yards on nine plays. The big one was the lone breakout run of the night, a 47-yard gallop by Flores, who was run down from behind by Hornets’ corner Antonio Rice. Noah Sorrell eventually scored from the 1 and Martin added the extra point with 9:49 left to play.

On a drive that included four penalties, all against the Hornets, they answered with a march from their own 21 to the Cabot 17. A third-down from the 39 was converted with a 21-yard reception by Murray. Moments later, Meaders was sacked and lost the ball but Scott jumped on it and held on as two Panthers tried to wedge it out.

That, and the first penalty, led to a third-and-21. With Meaders buying time with his feet, he eventually found Scott for just enough yardage — 22 yards — to keep the drive (and the clock) moving.

After Meaders found Scott for a first down on a third-and-6 from the 21, the penalties started piling up and instead of getting a game-clinching score, the Hornets punted, setting up the dramatic finish. 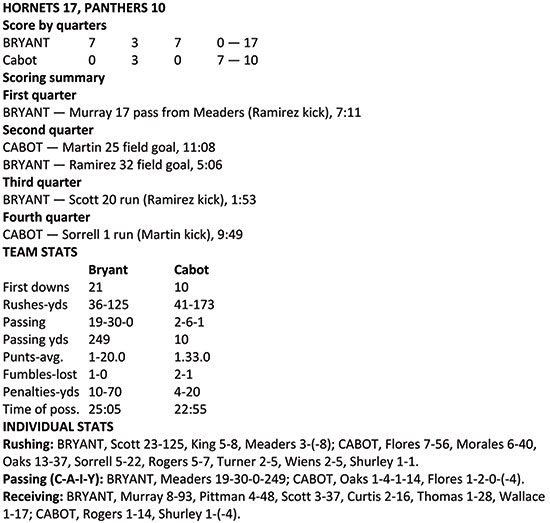 October 21 in Bryant athletic history: 2018
Homecoming Queen to be crowned prior to Friday’s game