The Conway Blue Wampus Kittens made them earn it but the Bryant Hornets freshmen captured[more] the Central Arkansas Junior High Conference regular-season championship with a 36-30 win on Monday night before a smattering of fans at the Bryant Middle School gym. 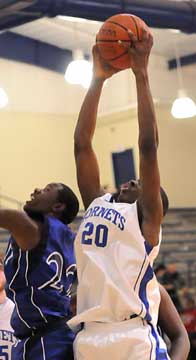 J.C. Newborn and Brandan Warner combined for 24 points for the Hornets. Newborn scored 11 of his game-high 13 in the second half while Warner had 7 of his 11 in the late going including a pair of free throws with :13.5 showing to clinch the victory.

Bryant improved to 17-5 overall and 7-1 in the league while earning the top seed and a first-round bye for the CAJHC post-season tournament, which will commence in Bryant this Thursday.

The Hornets were put in position to win the title when North Little Rock was forced to forfeit its 49-43 overtime win over Bryant on Jan. 30. North Little Rock used a player that night that had been hit with two technical fouls in his team’s previous game. That meant that he was supposed to automatically miss his team’s next contest, but he played and was a key cog in the win.

Bryant will open play in the tournament on Saturday against the winner of Thursday’s opener between the eighth and ninth seeds, Benton and Cabot North. Game time has yet to be announced.

Monday’s game, as the regular-season finale, was played with incredibly few fouls being called. In fact, after just five fouls were called between the two teams in the first half, the game went to into its final minute with just three having been cited in the second half. And with just one of those on the Kittens and Bryant leading 32-28, they had to use up five fouls to get the Hornets into the bonus. 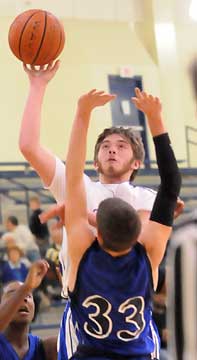 With plenty of effort as the Hornets spread the floor, the Kittens got that done by the :26.3 mark. K.J. Hill went to the line for Bryant and converted twice to make it a 6-point lead. Grant Ellis countered with a jumper from the lane with :20 left and, after a timeout, the Kittens fouled John Winn on the inbounds play before the Hornets even got the ball in.

Winn missed the front end of the one-and-one with :18.8 showing but Newborn tapped the carom to Warner who was fouled with :13.5 to go. He proceeded put the game on ice.

The game was tight throughout. Hill made a steal then hit a layup off a feed from Warner to break the ice on the contest. Conway’s Tyler Smith answered but then Hill canned a 3 to make it 5-2.

The Hornets led 9-6 after a layup by Warner with 1:56 left in the opening stanza but Conway Blue’s DeRail McCoy tied it with a 3 and Ellis hit a follow shot to give the Kittens an 11-9 lead going into the second period.

An offensive rebound basket by Newborn tied the game at the start of the new quarter. McCoy canned a long 3 and the Kittens had a chance to add to their 14-11 edge only to have Warner and Ryan Hall combine to force a turnover that Warner cashed in with a layup. In turn, McCoy misfired from long range and Winn connected at the other end, giving Bryant a 16-14 lead that held until the half. 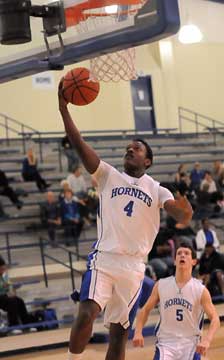 After converting 5 of 6 shots from the field in the first quarter, Conway Blue managed to convert just 1 of 9 in the second period.

But the Kittens surged back to the front in the third quarter, sparked by center Jason Graves, who scored all 6 of his points on consecutive jumpers from around the free-throw line through the heart of the period. Bryant’s 18-14 lead thus turned into a 20-18 deficit.

But, with 1:44 left in the period, Warner broke Bryant’s dry spell with a 3-pointer to put the Hornets ahead for good. Newborn followed with a steal that resulted in a three-point play and a 24-20 lead going into the fourth quarter.

The Hornets opened the final period in a spread offense. Hill got a lane to the rack but missed. But Marcus Withers tapped the rebound to Warner who canned an eight-footer which produced Bryant’s largest lead of the game, 26-20.

Ellis converted Conway Blue’s only free throws of the game with 4:49 left to play but a layup by Newborn kept the lead at 6. He traded baskets with Smith before McCoy’s driving scoop cut the lead to 32-28 going into the final minute.

Bryant started playing keepaway at that point and the fouling commenced.