Every season since 2002 except one, either the Bryant Junior Hornets or the Lake Hamilton Junior Wolves, or both, has won or shared the championship of the South Division of the Central Arkansas Junior High Conference. And some years, it’s come down to which one beat the other.

In 2008, Lake Hamilton won the game 21-3 (amid some late-game controversy when the Wolves called a timeout to add a meaningless touchdown) but it was Bryant’s lone loss of the season and the teams wound up tied for the Division title with identical 9-1 records.

In 2007, the Hornets drubbed the Wolves 35-14 on the way to an unbeaten run through the Division.[more]

In 2006, Lake Hamilton prevailed 25-7 on the way to an undefeated championship.

In ’05, the only difference between the two teams atop the Division standings was Lake Hamilton’s 36-34 win on a kickoff return for a touchdown in the final minute of the contest.

Bryant won the game 17-13 in 2004 and both teams, along with Sheridan, wound up in a tie for the league crown.

In 2002, Bryant shared the title with Benton. Lake Hamilton was left a game behind the two due to a 28-0 loss to the Hornets.

So, it was not surprising that the two teams were pumped up for Thursday’s divisional opener at a soggy Bryant Stadium.

As might be expected under those conditions, turnovers proved to be a huge factor as Lake Hamilton turned three of Bryant’s four into points on the way to a closer-than-that 30-14 win.The Hornets had a chance to tie the game in the final four minutes but the last of the turnovers dashed their hopes as Lake Hamilton’s Joey Wilkerson returned the interception 22 yards for the clinching touchdown.

The loss leaves the Hornets 3-1 overall and 0-1 in the division, exactly where last year’s edition of the team was at the same point in the season. This year’s Hornets will try to duplicate the title run that team made beginning on Thursday, Oct. 1, at Conway Blue.

The Hornets drew first blood in the contest after forcing a Lake Hamilton punt on the opening series of the game. A nice return of the punt by Jalen Bell set up the Hornets’ first possession at their own 47.

Lining up as if to run the old swinging gate on the extra point, second-string quarterback Zach Cambron took the snap and pitched to third-string quarterback Austin Powell who fired a pass to Bell in the back of the end zone for a two-point conversion.

Lake Hamilton responded with a long drive from its own 38 to the Bryant 11. A holding penalty on first down there pushed them back and, a play later, Smith was dropped for a loss by Ian Shuttleworth, Cortez Williams and Hunter Schelle.

Two incomplete passes followed before a fourth-down toss into the end zone was tipped around through several hands. Initially, a touchdown signal went up but, as it turned out, the Hornets had come up with the interceptions to turn back the threat and preserve the 8-0 lead.

But, on the very next play, Smith intercepted for the Wolves. He returned the ball to the Bryant 1 but an illegal block in the back pushed them back to the 15.

An 11-yard dash against the flow by Jose Rios got the ball back to the 1 and, from there, quarterback Clay Jessie snuck it in.

Jessie passed to Logan Ethridge for the two-point conversion and the game was tied with 5:40 left in the half.

It didn’t stay that way for long. On the ensuing kickoff, the Hornets coughed up the football and Smith recovered for Lake Hamilton at the Bryant 39.

Three plays alter, Smith sprinted 17 yards to the end zone for a touchdown that, with Rios’ run for 2, quickly had the Wolves ahead 16-8.

In turn, Bryant’s drive to the Lake Hamilton 29 was hampered by a penalty for an ineligible receiver downfield not only moved them back but negated a 7-yard completion. On the next play, Lessenberry, looking to complete a long ball over the middle, had his pass picked off by Smith and returned to the Bryant 19.

Aided by a holding penalty, the Hornets held. On a second-and-11 from their 18, a bad snap exchange produced a fumble that, frustratingly for the Hornets, was recovered by Smith.

The Hornets stuffed a fourth-and-1 quarterback sneak and took over on downs at the Lake Hamilton 29 with :16.1 left.

Lessenberry kept for 19 yards to the 10 but, on the final play of the half, he was stopped for no gain.

Bryant got the ball to start the second half and the team’s leading rusher Jalen Bell got the first call and streaked 60 yards for a touchdown.Though a try for two failed, the Hornets were still within 16-14 with plenty of time.

Lake Hamilton, however, pretty much hogged that time with its offense.

Bryant wound up running eight more plays on offense the rest of the half. As it turned out, that touchdown run by Bell was his last rush in the game as well as the Hornets’ final first down of the contest.

Lake Hamilton responded with a drive to the Bryant 2. Along the way, the Wolves converted a third-and-7 from their own 41 with a 29-yard completion from Jessie to Smith. Moments later, on a third-and-12 at the Bryant 32, Jessie hit Brack Teague down the middle to reach the 5.

Rios ran to the 2 then Jessie tried to sneak it in only to lose possession on the snap. Bryant’s Hunter Berry pounced on the loose ball and the Wolves had been turned back.

But from its own 1, Bryant was unable to work its way to a first down. Lessenberry kept on all three plays and, on third-and-2, he was dropped for a loss by Gavin de los Santos.

Again, along the way, the Hornets came tantalizingly close to gaining possession. On a third-and-5 from the Bryant 35, Smith took an inside handoff and juggled ball as he dashed ahead for 7 yards and a new set of downs.

After Rios was decked for a loss by Shuttleworth, the tailback ran a draw play for 20 yards to the 9. Two plays later, Jessie kept for the touchdown that made it 22-14.

Knowing a single a point would give the Wolves a two-score advantage, a conventional extra point attempt was made only to have the kick blocked.

That kept Bryant’s hope for a rally to tie intact. With a touchdown and a two-point conversion, the Hornets could have tied the game.

But they got neither. After a first-down throw from Lessenberry was dropped, a second-down pass, on an attempt at the tunnel screen (which has been so good to the Hornets this season), was intercepted by Wilkerson and run in for the touchdown.

Jessie threw to Smith who made a nice catch in the corner for the 2-point conversion and the final score was on the board.

The Hornets had 3:54 to try to score 16 points for a tie but Lessenberry was sacked three times over the next four plays and they gave the ball up on downs with 2:38 to go.

The Wolves drove to the Bryant 7 and, this time, took a knee instead of a timeout, celebrating the win with their boisterous fans. 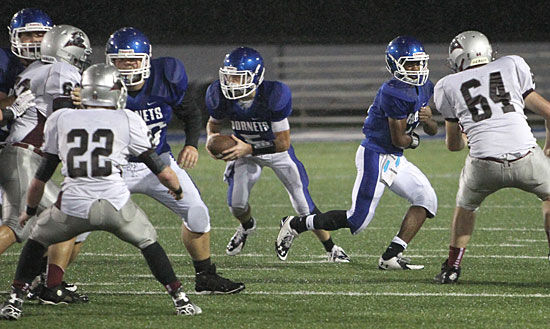