This day in Bryant athletics history: 2009 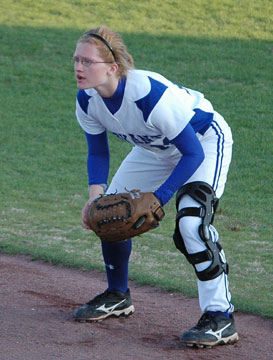 Bryant, Ark. — One of the reasons that the Bryant Lady Hornets’ trip to Tennessee for a tournament that included 33 other teams from seven other states was to see some top-notch competition including some excellent pitching.

It just so happened that the first game back from the trip came against the North Little Rock Lady Charging Wildcats on Tuesday, March 31. North Little Rock features one of the best pitchers in the state, Jessica Sheldon, who’s been handcuffing opposing batters in the 7A-Central Conference and the state for three years before this, her senior campaign.

Sheldon led the Lady Cats to consecutive State championship games. They lost in 2007 then won it all last spring.

So, the Lady Hornets were geared up for Sheldon’s fireballs come Tuesday.

But, as it turned out, Sheldon was unavailable to pitch and the back-up pitcher took to the circle. And it took the Lady Hornets a little while to adjust. But a 7-run fifth overcame North Little Rock’s 3-0 lead as the Lady Hornets prevailed to improve to 9-4 overall and 3-1 in league play.[more]

“It was different today,” acknowledged Lady Hornets coach Lisa Stanfield. “Today, we needed to be patient at the plate whereas (in Tennessee) we had to be aggressive. I still don’t feel like we hit the ball that well. We hit better in Tennessee.”

It stayed that way until the fifth. Christen Kirchner had singled in the first but as stranded. In the third, a two-out walk to Paige Turpin and a single by Jenna Bruick went for naught. Kirchner and Jenkins each singled in the fourth and, with one out, Sarah Hart walked to load the bases. But a force at the plate then a pop out, kept it 3-0.

“It kind of threw Peyton off when they started calling illegal pitches,” Stanfield noted. “She just needs to learn to roll with it.”

Turpin opened the fifth with a single, advancing to second on a wild pitch. Walks to Bruick and Lana Naumann loaded the bases and a run scored when Kirchner reached on an unsuccessful fielder’s choice as Turpin scored. Jenkins then hammered a two-run double to tie the game.

The inning continued with Jessie Taylor getting hit by a pitch. Hart drew an RBI walk and, with two down, Kayla Sory drew a free pass that forced in a run. Taylor scored on a wild pitch and so did Jessica Cudd, who was running for Hart.

North Little Rock’s only other threat came in the sixth with a pair of singles to start the inning. But two pop ups and a grounder into a force at third kept the Lady Cats from cutting into the lead.

Before those hits, Jenkins had retired 10 in a row. The only baserunner during that stretch came on a hit batter with one out in the fourth and that baserunner was thrown out trying to steal by Hart, the Bryant catcher.

The only other hit Bryant had was a two-out single by Taylor late in the game.

The Lady Hornets were set to play against Central in Little Rock on Thursday before hosting arch-rival Benton on Friday.

Bryant won the JV game 3-0 in three innings behind the pitching of Cudd. The JV is 8-0 this season.