BENTON — Take it to the rack.[more] 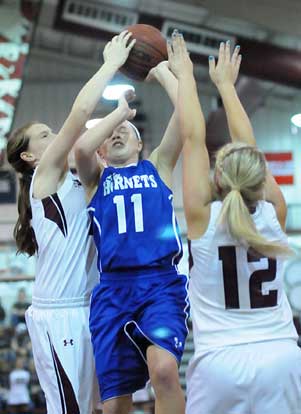 Despite playing in the Benton Arena, the Bryant Lady Hornets shot 25 free throws to the home-standing Lady Panthers 11 when they renewed their rivalry Tuesday night. Though their percentage wasn’t what they’d like it to be (15 of 25, 60 percent), the Lady Hornets made them when they absolutely had to at the end when their lead had been trimmed to 3.

It was the eighth straight win in the series for Bryant. The last Benton win was Dec. 15, 2006.

“ln a game like this, you don’t want to settle for shots — in any game, but really in big games, you want to get to the rim,” explained Brad Matthews, who’s in his first year as Lady Hornets head coach. “And I thought our kids really attacked in transition well and I thought we got to the rim in the half-court.

“Benton does a great job defensively,” he noted. “Coach (Jerry) Chumley does a great job teaching ‘man’. But I thought we were able to get some kids in some space and let them play. I thought all our guards all played well tonight.

“We didn’t shoot it particularly well but that happens in rivalry games,” he reiterated. “That’s why we preached defense, we preached rebounding, we preached taking care of the ball. I thought it was a great team win. We defended well as a group and, offensively, we had enough contributors that carried us over the top.” 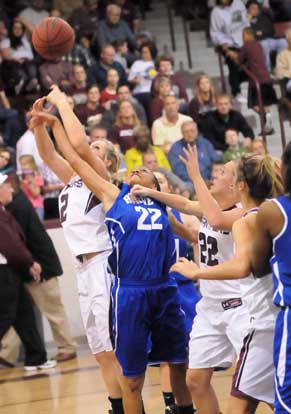 Junior guards Kiara Moore and Logan Davis each scored 13 points and combined for 23 of the team’s free-throw attempts. Sophomore Taneasha Rhode scored 10 off the bench and led the team with seven rebounds. Dezerea Duckworth, another sophomore, added 6 after subbing in.

Benton was paced by Korie Parker’s 13 points. Bailey Gately added 10. Brooke Million had 8 but the key for Matthews was holding post player Madi Brooks to 3, though she had nine rebounds.

“We needed to guard (Brooks). She’s a good player,” the coach said. “We knew (Million) could really shoot it good from the outside. I thought our kids really executed defensively. We had a few breakdowns but not bad.

“Benton’s got a really good team,” he stated. “Coach Chumley does a really great job. Only two games in, it’s hard to have a good scouting report but I thought our kids really played to the scouting report really well.”

Bryant used a variety of defenses, including a press and a half-court trap at times, and wound up forcing 23 turnovers. They broke the game open a bit when Matthews had his team extend the defense in the second half. 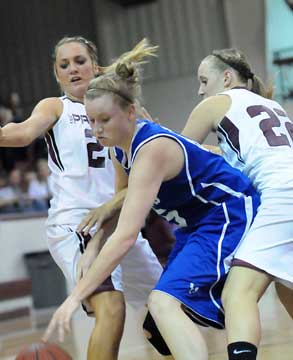 The fourth quarter began with a flurry of turnovers by both teams before Duckworth canned a 10-footer to bump the margin to 28-23. Chumley called a timeout but, when play resumed, Duckworth made another steal and fed Rhode for a bucket to make it a 7-point game.

Yet another theft by Duckworth followed but the Lady Hornets were unable to take advantage. Moments later, however, Rhode stepped in to pick off a pass. She got the ball to Davis and, at the other end, hit the glass to score, making it a 32-23 game.

Duckworth blocked a shot by Reynolds and, after the inbounds play, the Lady Panthers turned it over again. Davis was fouled attacking the basket and converted once to give Bryant the first double-digit lead of the game, 33-23.

Benton, sparked by a 3-pointer from Gately, rallied. The Lady Panthers whittled the margin to 37-32 with 2:08 to go and, after a timeout, Bryant spread the floor and made Benton chase and foul. 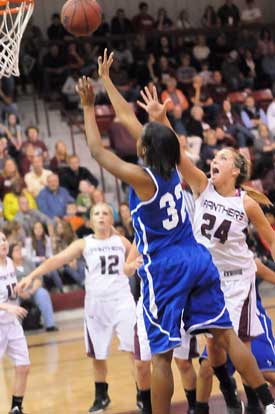 A key play occurred when Moore missed the front end of the initial one-and-one only to have Rhode out-maneuver the Benton rebounders for a stickback that made it 39-32 with :58 left.

Still, the Lady Panthers wouldn’t go away. Gately drove for a layup and, following a Bryant turnover, Million connected twice at the free-throw line. Suddenly, with :27.1 to go, the lead was down to 39-36.

Moore was fouled with :24.3 showing but missed the front end. At the other end, Benton went inside to Brooks but her off-balance shot wouldn’t go. Moore was fouled with :13 to go and, this time, got both shot to go. Million missed on a 3 and Davis tacked on a final free throw with :04.6 left.

Benton started the game by building a 5-0 lead. Davis broke the ice for Bryant with her first two free throws at the 3:27 mark of the first quarter. Moore followed with a steal and layup and when Rhode converted twice at the line after grabbing an offensive rebound, the Lady Hornets had the lead.

Davis forced a turnover and cashed it in with a 3-pointer, making it 9-5 going into the second period.

Bryant maintained the advantage and held a 15-9 lead before a free throw by Brooks and a stickback by Gately in the late stages of the half cut it to 15-12.

Moore scored the first bucket of the second half off a feed from Davis but Benton tied it on a 3 by Gately and a layup by Parker.

The Lady Panthers just couldn’t manage to take the lead.

Bryant will be off until beginning play in the annual Crabtree Invitational Tournament in Bentonville, Dec. 1-3.