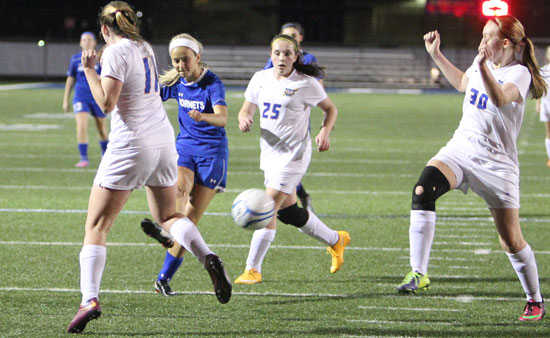 Going into the 2015 soccer season, there was nothing nuanced about the motivation for the Bryant Lady Hornets. All they needed was to remember the heartbreak of reaching the Class 7A State championship match in 2014 and, through all kinds of adversity, coming up literally inches short of winning the title against the perennial juggernaut Bentonville Lady Tigers. It was, as a matter of fact, the Lady Hornets’ only loss all season.

The result in ’15 was the kind of drive and focus that wound up paying off with the first State championship in soccer in school history that, by the way, included a little revenge on Bentonville in a semifinal thriller and the victory in the finals over Fayetteville in Fayetteville.

So how do you handle the “State champs” moniker in a new season? Even with a number of returning starters on hand?

“We are trying to make it a goal this year where we — I mean, we’re proud of our accomplishments and it’s something we’ve strived for, for a really long time, but it’s a new season and that doesn’t mean anything,” she explained. “We’ve celebrated and now we’re looking forward to another one, hopefully. But we certainly haven’t earned it just based on last year.”

Where it’s undeniably a factor, however, is that several of the Long’s key players have returned after experiencing both 2014 and 2015.

“That does make a huge difference,” she acknowledged.

“They’ve played together for, this will be three years,” Long said. “That’s nice.

“You know when I got Anna as a freshman, I was so excited because I just hadn’t had a finisher, ever. I can remember her scoring in the State Tournament game against Mount St. Mary her freshman year, her being the one to step up and score. I remember thinking she’s going to take us places.

“Then when Caroline came to join her, it was kind of like, I don’t know if anyone can stop us from scoring in games, you know? To be honest, there hasn’t been very many 0-0 games since I’ve had both of them.”

Last season, it was only Conway, which handed the Lady Hornets a 1-0 loss, and Fort Smith Northside who battled them to a scoreless tie in regulation (before Bryant won in PKs) in the annual Fort Smith tournament.

“Individually, they’re so strong,” Long added regarding Lowery and Campbell, “but together? All it takes is one mistake and they’re going to eat you alive for it. Either one of these girls, if you put them in front of the goal, it’s going to go in. If they miss, it’s a rare situation. When you have that kind of accuracy finishing — people get so focused on them but I’ve got other girls that can step up and score. Last year, we would have three or four different girls scoring. The assists and stuff, it would usually flow through one of those two.

“It’s kind of nice when you don’t have to just depend on one person to score,” she said. “If they get so focused on Caroline, Anna can do the same thing when she has to. Just the fact that they can feed each other — they both play each other some pretty decent balls across the middle. They get the ball to each other’s feet a lot and my center mids this year can do the same things for them. With all the different combinations that we have, when you have two powerhouses like that, it’s a rare combination.”

Regarding the defense, Long said, “My defense is strong. We only lost one senior on the defensive line and I actually think I’m going to play with three this year quite a bit. We did that a few years ago. We’ve been playing 3-5-2 until last year we played the 4-4-2. I think we’ll play a combination of a couple of different formations this year. But those three in the back are strong enough they should hold.”

That’s junior Sarah Kennedy, senior Whitney Brown and sophomore Jad’n Nichols, who all started last year. In addition, senior Kayla Dreher, who played considerably last season, has returned. She moved to midfield once Kennedy emerged but if Long goes with four on the backline, Dreher has the experience.

“The biggest thing is probably (graduating) our keeper who was such an impact player last year,” the coach asserted. “Maddie (Hawkins) kept us in some games. She was MVP of the State Tournament because of the Bentonville game, which was well deserved. We’ve been working really hard with Brittney Warner and Katie Clifton. They’re kind of battling it out right now to see what’s going to happen. That’s probably our biggest hole we’re trying to fill.”

Like on the backline with Dreher, the experience of the returning players creates a lot of versatility.

“The experience that this senior group brings is irreplaceable in my opinion,” Long said. “Some of them have been starting for me since they were freshmen. So to have four years of that kind of experience and that kind of leadership — if that’s what you have leading your team, that’s pretty nice.

“I can’t tell you how many times people have asked me, ‘When is that girl going to graduate?’ on several of them. It feels to them like they’ve been there forever because they have been starting for me.”

Since their freshman season, the Lady Hornets have compiled an incredible 62-6-3 record including 28-1 in conference games.

“One of the big things is getting Kara Moser back (for her senior season),” Long said as she turned to her midfielders. “You go back to her sophomore year. She was starting and tore her ACL when we were playing Conway. Then she tore it again as a junior in our club season. She’s part of that senior group. Having her back on the field is going to help us a lot.”

“Lots of subbing,” Long said. “I’m planning on running them. We’re going to have a lot of depth. That’s something we did not have last year. I feel like I have about 20 players that I feel confidant can go on the field. Most teams start dropping off after 15. I don’t really think there’s that much of a drop off for us.

“Our freshman group brings a lot of strengths,” she noted. “It’s inexperienced but they’ll get it by the end of the year. It’s kind of like four years ago when these seniors were freshmen. And they were part of the reason for the outlook we had.”

Entering tonight’s opener, Long admitted her expectations are just as high as they are every season.

“It’s really keeping them focused at this point,” she related. “They’re tired of practicing right now and, honestly, I haven’t been that impressed with what I’ve seen. It’s because of my expectations. Someone came and watched practice the other day and we scrimmaged. They said, ‘They look great.’ But, in my opinion, I’m like, ‘We look terrible.’ Part of it is they’re ready for a game.

“And part of it is, that drive,” she concluded. “Once you get one — and I didn’t really realize that’s going to be the hardest thing — keeping us focused on trying to get another one — not that they don’t want another one — but that push for that first one is a really different experience than that push for a second one. I tell them, ‘Anybody can get one. It takes somebody special to come back and get a second one.’