Bryant Lady Hornets junior guard Logan Davis has gamely been playing for weeks with[more] a sore foot and there have been some nights when, as even-keel as she’s been, you could tell it’s bothered her more than others. On Friday, however, it looked like she was feeling great as she scored a season-high 17 points including four key free throws in the final minute to help her team hold on to a 58-50 win over the Little Rock Central Lady Tigers. 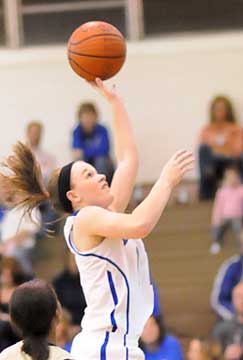 The Lady Hornets had just completed a five-game spin through the toughest part of the conference schedule with what could’ve been a demoralizing 54-15 loss to the first-place North Little Rock Lady Charging Wildcats earlier in the week. By bouncing back so well against Central, the Lady Hornets finished the first half of the round-robin league slate at 4-3. That’s good for fourth in the conference and, among 7A teams in the league, third.

“Coming off what happened Tuesday, it was a great win for out kids,” acknowledged first-year Bryant coach Brad Matthews. “To end up 4-3 on the first rotation is really good for us. This gives us a little springboard heading into the second rotation.”

The Lady Hornets start the second half at Mount St. Mary on Friday. The Belles took them to overtime at Bryant on Jan. 5 and played North Little Rock to within 10 points at home but have yet to win a conference game.

Central came in just 1-5 in the league but the Lady Tigers played tough and were within striking distance all the way. They closed to within 53-50 on a pair of free throws by Jamie Ruffins with :40.1 showing. Those came on the heels of Davis’ first two free throws after Central had trimmed the lead to 3 moments before. 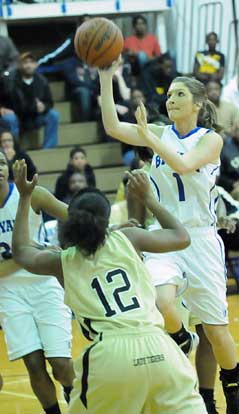 A telling play followed Ruffins’ charity tosses, however. Bryant forward Courtney Davidson got free inside for a basket and was fouled. But the foul came after the shot so, instead of an “and-one” she went to the line for two shots in the double bonus. Though she missed the first, she canned the second giving the Lady Hornets a two-possession lead with :32.9 to go.

The Lady Hornets played solid defense at the other end and Ruffins eventually took and missed a shot. Bryant’s Whitney Meyer snatched the rebound in a crowd and got the ball to Davis who was fouled with :16.5 showing. Her subsequent trip to the line sealed the victory.

Meyer, wearing a mask to protect her broken nose, was in the game in relief of sophomore post Taneasha Rhode who had fouled out at the start of Central’s final push. Rhode had been frustrated by Central’s collapsing defense and taller center Courtney Hines. She still managed 8 points, 15 rebounds and six blocks.

Her fifth foul came after she’d made the sixth block and pulled down the last of those rebounds. Trying to clear the ball in a crowd of Lady Tigers, she was cited for an offensive foul. At the time, the Lady Hornets had a 51-40 lead and had the play stood, they would’ve been working on expanding that margin, which was their largest of the game.

The Lady Tigers started their comeback with a driving layup by Ruffins. Struggles at the free-throw line by the Lady Hornets helped produce the opportunity for Central. Following two misses by Bryant’s Dezerea Duckworth, Brittany Ruffus drove for a basket.

Following a pair of misses by Kiara Moore, Central’s Taylor Lewis converted twice. So when Ruffins made a steal and layup with :56 left, the Bryant lead was just 51-48. Davis and Ruffins then traded free throws before the unusual three-point play by Davidson. 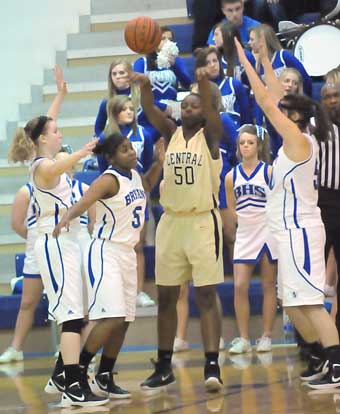 Davis was instrumental to the Lady Hornets’ offense early when Moore, the team’s top scorer on the season, got into early foul trouble and had to go to the bench. At the time, Bryant held a 10-6 lead. The Lady Tigers quickly cut the margin to 2 and had a chance to tie only to have Hailey Nichols missed a pair of free throws.

In response, Davis knocked down a short jumper and, moments later, attacked the basket and was fouled. When she converted both shots, Bryant held a 14-8 lead.

Still, Hines and Kendra Caroline scored for the Lady Tigers in the final 30 seconds and the game went to the second quarter with Bryant clinging to a 14-12 lead.

Caroline tied it off the offensive glass early in the second period. Bryant regained the advantage when Peyton Weaver nailed a 3.

But a late run by the Lady Tigers allowed them to take a 26-22 lead before Duckworth was fouled on a running 3-point attempt at the last second. She converted twice to make it a 2-point game at the break.

Central opened the third quarter with a 6-1 stretch capped by a 3 from Lewis, which produced a 32-25 lead.

A short jumper by Rhode helped Bryant begin to claw back. Chloe Washington answered for Central but a drive to the rack by Davis, a steal and a pair of free throws by Moore and a layup off a turnover by Duckworth whittled the lead to 1.

Central had two chances to bump the margin back up but Caroline misfired then Rhode blocked a shot by Nichols. With 2:55 left, Davidson stepped into a 3-pointer and drained it to put the Lady Hornets back in the lead.

After a timeout by the Lady Tigers, Caroline and Ruffus scored to put them back on top, 38-36. But when Davis flushed a triple from the left corner, Duckworth made a steal and Moore hit a layup, Bryant was ahead to stay, taking a 41-38 lead into the fourth quarter.

The score was the same over two minutes into the final period when Lewis was hit with a technical foul on an inbounds play under the Central basket. Moore converted both free throws and when Ruffins was called for a foul before Bryant could inbounds the ball on the subsequent possession, Lady Tigers head coach Michael Green was cited for a technical as well.

Again Moore converted both shots and suddenly Bryant’s lead was 45-38. The Lady Hornets had a chance to increase that when they were awarded the ball after the free throws but Caroline made a steal. Ruffins was fouled on her drive to the basket but couldn’t get either free throw to go.