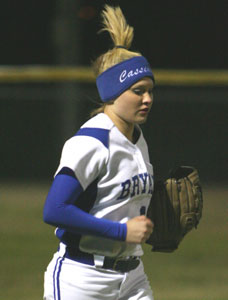 By Rob Patrick
RUSSELLVILLE — Things got a little hairy at the end but the Bryant Lady Hornets, playing a game for the first time in two weeks, held on to edge the Russellville Lady Cyclones, 2-1, at Hickey Park on Monday, March 16.
Pitchers Payton Jenkins and Christian Kircher had combined to shut out Russellville without a hit over the first six innings and Kirchner appeared to be closing it out, retiring the first two in the b
ottom of the seventh on just four pitches. And with Russellville clean-up hitter Andrea Dixon at the plate, the Lady Hornets came within a strike of ending it only to have Dixon smack a 3-2 delivery into right field for her team’s first hit.
Kirchner, obviously a little flustered after having a couple of close two-strike pitches not go her way against Dixon, hit the next batter, Laura Brown. Kelsey White walked to load the bases then Megan Hale was hit by the very next delivery forcing in a run.
Bryant head coach Lisa Stanfield came to the pitcher’s circle and had a long talk with her senior pitcher and, when play resumed, her very next delivery was hit hard but right to Jessie Taylor at third. Taylor made the play and threw Lauren Guarino out at first to end the game.[more]
“We were thinking the strike zone was still going to be there and it kind of rattled her when it changed up a little bit,” Stanfield said afterwards. “At times like that, we’ve just got to keep rolling with it and stay in our game. Nobody can predict things that are going to happen, we’ve just got to be able to stay in our game. I don’t know. It’s kind of like this team is still a little bit immature. We just need to play more ballgames.”
Indeed it was just the fifth game of the season for the Lady Hornets. They improved to 3-2 overall and 2-0 in conference play with Conway visiting today and a trip to Cabot set for Thursday, both league games.
The Lady Hornets managed eight hits but only once did they put two of them together in the same inning and, as it turned out, the run that produced was the difference. 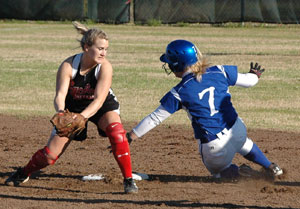 “I’m just about out of things to do, practicing indoors, outdoors,” Stanfield said when asked about how the time between games might’ve affected the hitting. “Even with the layoff, we found ways to provide live pitching and, in situations like that, I thought we could’ve done better. The pitching was a little bit slower but we’ve worked on that in practice. I think we can do a little bit better, honestly, of stringing hits together.”
The Lady Hornets got on the board in the first when Paige Turpin singled to start the game. Two outs later, Kirchner reached on an error and when Jenkins’ fly to left was misplayed, Turpin scored.
Jenkins, a freshman, retired the first six Russellville batters she faced but issued a walk to Hale to lead off the third. Guarino got a nice bunt down but Bryant catcher Sarah Hart made an even better play to get her at first as Hale moved to second. Jenkins then got Christina Noteboom to tap back to the pitcher’s circle. She turned and caught Hale off second, chased her back and threw to Kirchner, playing second, for the out. Two pitches later, Hart gunned down a Russellville pinch-runner to end the inning.
Meanwhile, the Lady Cyclones’ 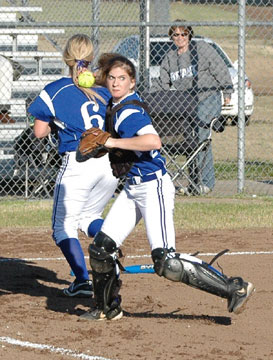 freshman pitcher worked around a two-out single by freshman Cassidy Wilson in the second and a one-out hit by Kayla Sory, another freshman, in the third. In the top of the fourth, Hart blooped a one-out single to right but was caught stealing moments later.
The bottom of the fourth began with a shot to center by Russellville’s Janessa Hudson. Fortunately, it was right at Turpin who flagged it down for the first out. A pair of groundouts followed.
Kirchner relieved in the fifth and retired the first five she faced before hitting Noteboom with a pitch. She got Hudson to bounce to Lana Naumann at second, however, to retire the side, sending the game to the seventh.
“Either one of them, when I start them, it’s to go seven innings,” Stanfield said of her pitchers. “They both should be strong enough and capable of going seven. But, sometimes things happen. Payton’s stuff stopped working. We had Kirchner warmed and it was a good opportunity so we made the switch. We’ve got so many girls that can play just
about anywhere. That’s kind of nice.”
The second Bryant run came in the top of the sixth when Kirchner bounced one off the fence in center for a double, took third on Naumann’s roller to third then scored on Taylor’s grounder up the middle for a single. Hart sacrificed Taylor to second but Simmons ended the threat with a strikeout, leaving it 2-0.