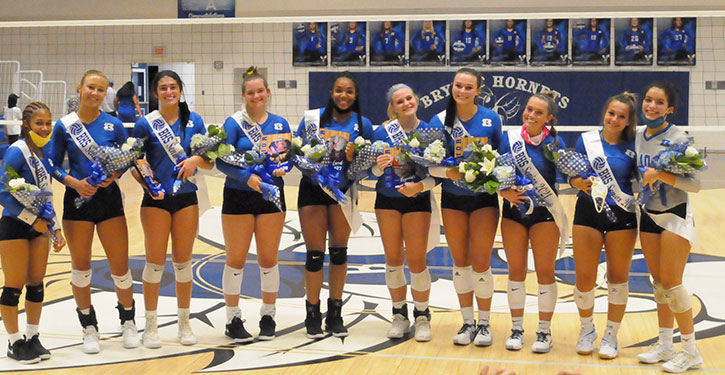 For more photos of this event by Kevin Nagle, go here and here

With a sizable home crowd and those ceremonies in the offing, the Lady Hornets started their match well, playing with emotion and intensity. They led most of the first game. Ferguson’s kill started the contest, but Lakeside scored the next three points before Reynolds’ kill and a receive error by the Lady Rams had the score even at 3.

A kill by Ferguson tied it at 4 then consecutive spikes for points by sophomore Kinsey Gregory and Hoskins gave the Lady Hornets the upper hand. Hoskins had two more kills in short order and an ace served up by Lily Studdard helped push the lead to 9-5.

After a hitting error cost a sideout, Gregory countered with consecutive blocks to make it 11-6, Bryant’s largest lead of the night. It was 12-7 after Gregory and Camryn Martin, another sophomore, combined on a block.

But that’s when Lakeside steadily began to rally sparked by a pair of dinks that had the Lady Hornets scrambling. Martin’s kill helped but then a service error and a hitting error cost Bryant as the Lady Rams cut the margin to 13-12.

A tip by Reynolds and a service error by Lakeside had the Lady Hornets up 15-13 but a pair of errors cost them as the Lady Rams pulled even at 15.

When play resumed, Reynolds powered back-to-back kills and Hoskins served an ace and the Lady Hornets were only down 19-20. Lakeside put together a push to 23-19 before Reynolds gave Bryant hope with a kill followed by an ace from Jackson.

A block returned service to the Lady Rams and, despite one more kill from Reynolds, they closed out the first game.

Bryant never led in the second game. Lakeside pushed out to a 6-2 lead. After a service error by the Lady Rams, Hoskins scored with a tip then a kill as the lead was whittled to 6-5.

But Lakeside maintained. The Lady Hornets were down 8-12 before kills by Reynolds and Ferguson narrowed the difference only to have the Lady Rams finish with a flurry.

Bryant will return to action on Thursday at Pulaski Academy. A home match against Greenbrier on Tuesday, Sept. 1, will lead into the Lady Hornets first 6A-Central Conference match at home against Fort Smith Northside on Thursday, Sept. 3.