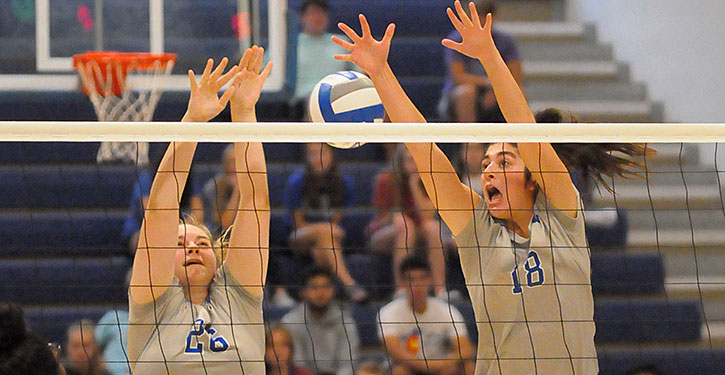 The 2020 season is a landmark for Bryant Lady Hornets head volleyball coach Leigh Ann Back, for more reasons than one.

Back’s team will travel to Benton tonight for a preseason scrimmage that’s usually a jamboree with several teams involved but, due to COVID-19 and restrictions that limit scrimmages to just two teams this year, it’ll be Bryant against Benton for five sets at the Benton Arena, starting at 5:30 p.m.

“I’m very excited because — I like practice. I’m not one of those people that loves practice because at some point in time, you and I practicing against each other, you’ll know everything that I’m able to do,” she related. “So, I’m ready to get out on a court against someone else.

“I know some of (Benton)’s players very well,” the coach said. “I actually coached one of them in club. So, I’m very excited to see what my girls can do.

“I’ve tried very hard to make sure my girls understand that it’s not Benton that we’re playing against, it’s somebody else,” she added. “This doesn’t count on our record, but it does count towards the rest of the season. We’ve got things to figure out.”

The Lady Hornets include 10 seniors, two juniors and 13 sophomores.

The seniors will be honored on Senior Night in the official home opener against Hot Springs Lakeside on Tuesday, Aug. 25.

“We ended up with 25 on the roster, which is bigger than we’d wanted,” Back allowed.

“And that sophomore crew is big, which is really cool,” she noted. “The sophomore class has some potential. And we’ve got some of the upper classmen that have really spent a lot of time working on their skills during the limited club season that they had then just on their own, which has really been impressive.”

The coach was particularly excited about her back line trio.

“I would say that my defensive line of Sam Still, Alyssa Hernandez and Jaiyah Jackson are the best, by far,” she stated. “I would love to see a server match up with them.

“Samantha Ferguson is returning, and she has worked very hard to hone her skills,” Back continued, regarding her front line. “She looks even better than she looked last year. I’ve got a couple of sophomores (Mary Beth James and Kinsey Gregory) that look really good and, of course, I’ve got Ella Reynolds, who can jump out of the gym, and Madelyn Hoskins who’s definitely been working as well. Camryn Martin is another big girl that’s a strong right side.

“I always say we’re deep but sometimes I think it’s just hopeful,” she said. “We’re deep. Finally, I can actually say that.”

It’s been a long time coming after a tough adjustment because of the virus.

“We started when we sent them home back in March and I basically kept telling the girls over and over again, ‘I don’t know how this is going to end so I need you to be ready,’ Back recalled. “I sent out individual ball drills and I sent out some workouts every week. And what I told them from that point until about maybe the beginning of May when we added the incoming sophomores into the zoom chats that we’d been having and the Google classroom that I’d been adding everything to. I said, ‘I can’t promise you a ball touch before we have tryouts, so this is all on you. I will have you physically ready but you’re going to have to make sure that you are volleyball ready.’

“Then when the governor finally released us to at least start back in some method, our trainers and our strength and conditioning got together, and they were very wise,” the coach added. “I was very excited that they didn’t allow us just to start practicing immediately. We were supposed to go straight strength and conditioning, which, to me, helps out because, if not, right about now some over usage issues would’ve started coming up and we would’ve had a lot of injuries.”

In June, they worked outside in the parking lot on Mondays, Wednesdays and Fridays.

“There were two shifts and we would work in every other parking space, so we were socially distanced,” Back explained.

“The very first time I gave them a ball to touch was the day of tryouts, which was July 8-9 or so,” she continued. “(Assistant) Coach (Lawrence) Jefferson and I came up with a team from there. We’re pretty happy with what we have. Then, we just started working.

“The first week, the entire volleyball staff, 8 through 12, the eighth grade came in and worked out for two hours, we break to clean, then the ninth grade came in and so on. So, they were getting tons of reps because there were a whole bunch of coaches inside the gym. When we came back to the high school gym from the junior high gym, we started going three hours and I was told by lots of parents, ‘Thank you, my daughters are sleeping very well now.’ They’re pretty exhausted but we’ve been training very, very hard.

“And I think that’s the new phrase this year — usually some phrase, some philosophy ends up coming up. Last year was more of a volleyball IQ thing, which we’re still working on, building volleyball IQ. But this year is not so much of them being coached. It’s them being trained.

“It’s kind of a different mindset. We’re really working on training the body to go ahead and get done what it’s supposed to get done. So, I’m pretty happy with where we are right now.”

August 19 in Bryant athletic history: 2009
Bryant golfers get in plenty of work over two days