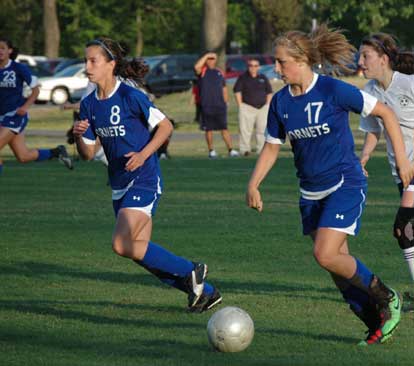 RUSSELLVILLE — Playing to her team’s strengths, Bryant Lady Hornets soccer coach Julie Long, made an adjustment to her team’s alignment about a week ago. And, despite a bit of a letdown against Van Buren on Tuesday, April 13, (in a match they still managed to win), it has sparked the Lady Hornets to a three-game win streak including a little payback on Thursday at Russellville.

Tarra Hendricks scored two first-half goals and assisted on a third in the second stanza as the Lady Hornets improved to 10-6 overall and 7-4 in the 7A-Central Conference, with a 3-0 win over the Lady Cyclones. Earlier this season, Russellville had stumped the Lady Hornets at Bryant, 1-0.

The two teams came into the game tied for third in the conference.[more] 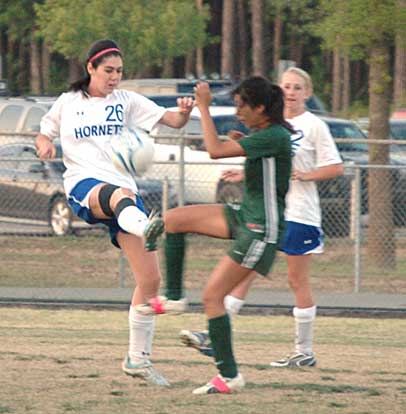 And it made a difference in the midfield.

“And anytime the ball does get back there, I never worry,” she added. “My three defenders are solid. They did an awesome job. Lindsey Brazil, London Abernathy and Sarenity Gomez all did a great job back there. They are solid. Sarenity and London are just so good and Lindsey’s got some speed back there, and heart. She’s going to work her tail off every time she’s out there.”

Long said the new alignment was first employed exclusively in the second half of the April 8 win over Mount St. Mary Academy. 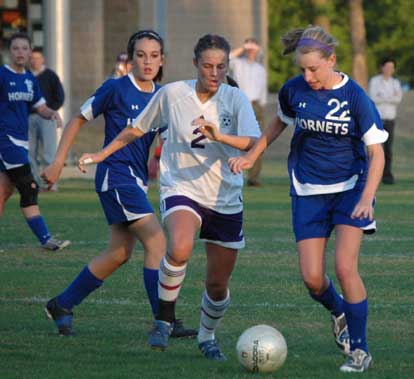 “We’ve been playing it since then and the girls and I, we all really like it,” she said. “It’s what fits for our team. It’s not for every team but it fits with the personnel that I have. That’s an advantage, too, for us. Most people are going to play with four in the back, but if we’re able to play with three, it helps us put more pressure on the offensive end all the time. And, at the end of a game when we’re down or we’re wanting to score, pulling them up, we’re just playing that way the whole game. The girls have just adapted to the change so well. It’s been nice.”

Against Russellville, the Lady Hornets got out early. Hendricks got a shot away from just outside the 18 and squeezed it in to the lower right-hand corner of the net. She got her second near the midway point of the half on a free kick.

The Lady Hornets took a 2-0 lead to the intermission.

“They were fired up after Tuesday’s game,” Long said of her team. “They were ready to play. (Russellville) got us earlier in the season when we’d out-played them and they got a goal late on us off a free kick. So the girls were wanting that game pretty bad and you could tell.

“They were moving the ball real well, probably the best movement we’ve had on the field all season,” she added. “I thought overall, it was our best showing.”

At about the 20 minute mark of the second half, Hendricks crossed a corner kick that Erica Selig headed into the goal to set the final score.

“I thought the whole team really stepped up and played well,” Long concluded. “Tarra had an awesome game, obviously. She came out ready to play.”

Bryant travels to Jonesboro for a tournament this Saturday. They play Jonesboro at 10 a.m. Later, they’ll take on Conway St. Joseph and Valley View. They return to conference action on Tuesday, April 20, when they host league-leading Conway before wrapping up the regular season at Cabot on Thursday, April 22, and at home against North Little Rock on Tuesday, April 26. 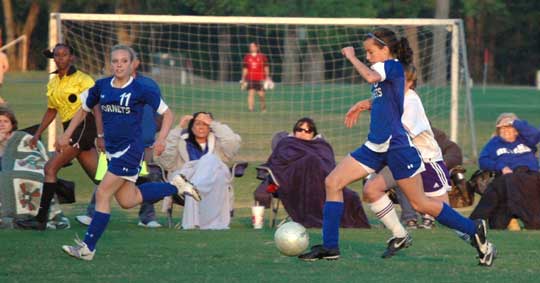