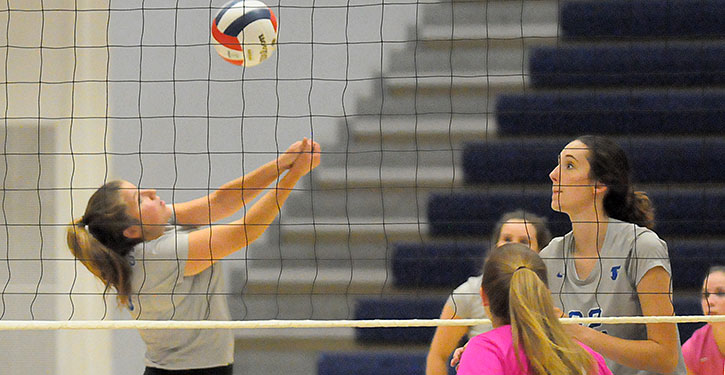 CONWAY — The Bryant Lady Hornets got more out of their play at the Conway Invitational volleyball tournament on Saturday than the two wins in five matches may indicate. With a crucial 7A-Central Conference contest at home against the Cabot Lady Panthers looming on Tuesday, the event gave the team a chance to work out some of the things that have gone into a rugged stretch in their regular-season schedule in which they’ve come up short in five times in the last six matches.

“We ended up in the Bronze bracket on Saturday, and, although it might not look like it on paper, we had a really good day,” acknowledged Bryant head coach Beth Solomon. “We had some unexpected changes happen on Friday, so we were running a new line up with some people playing different positions. The first game was an adjustment, but the girls played really hard all day long. We got in some really good team bonding moments.”

Bates added eight blocks, Russ four and Stone three. Loveless had two with Casey Welch and Lee making one each.

As a team, the Lady Hornets got 90.7 percent of their serves in with 14 aces. Ray had four with Lee, Stone, Erin Thompson, Kyla Baker and Lexi Brown recording two each.

Lee had 43 assists and Brown 26 over the five matches. Ray led the team in digs with 10. Baker had four, Lee three, Stone and Loveless two each.

“We left the tournament feeling very good about our new line-up and feel like that weak rotation from last Thursday is fixed,” said Solomon, referring to the team’s 0-3 loss at Fort Smith Southside. “We are excited to be back at home tomorrow night for our game against Cabot.”