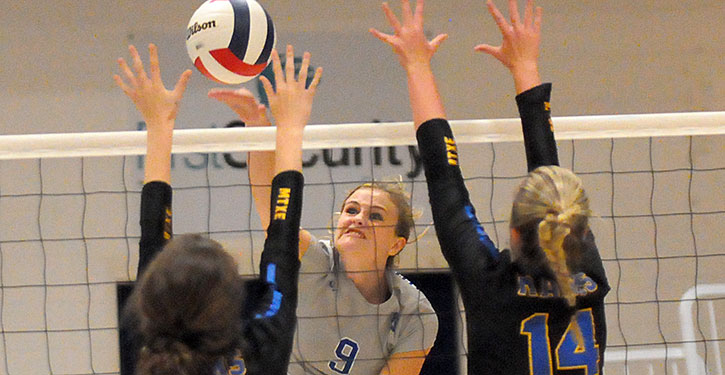 LITTLE ROCK — The Bryant Lady Hornets volleyball team traveled to the campus of Mount Saint Mary Academy of Little Rock for their second conference match of the season. The Lady Hornets fell in the match 1-3 but played the games close, winning game one 25-21, before dropping game two 25-27, game three 23-25 and game four 17-25.

“Nobody can say we not playing hard,” said head coach Beth Solomon. “We had some letdowns we should not have had. It was the first night we’ve had to dig ourselves out of a big hole.”

“Mount has always been really smart team about knowing where holes are and knowing where to tip,” she noted. “We adjusted to that and changed up for tips. I do not feel like we read as well tonight as we did on Thursday night against Northside, but it will come. We still have another several games to get that under control.

“We are getting better, and that is what you want to see,” the coach said. “We just do not want to peek yet with two months left to play. Now we have to find that little extra to get that win.”

Bryant had the opening serve, however, the Belles struck first with a kill. The Lady Hornets would later tie the game a 2-2 with a block from Ivory Russ and Truli Bates.

The game would later become tied again with a kill from Faith Stone that crossed the court placing the ball on the baseline. Bates would make two blocks to pull away from the Belles 7-4. With back to back hitting errors, the Belles allowed the Lady Hornets to pull away with a five-point lead 9-4.

A 2-5 drive would set the Belles up for back to back aces to tie the game at 11. The Lady Hornets would score four straight capped off with a Shannon Stewart ace to put them back into good position to win 15-11.

Both teams would trade scoring until back to back Mount serving errors put four points back between the two teams. The Lady Hornets would take the lead to game points with an ace from Emma Buiting. They got a tip over for the final point to end the set 25-21.

Beatriz Hernandez dominated the beginning of game two with back to back spikes which put the Lady Hornets up 3-1. Russ joined Hernandez controlling the front line with a kill, moving the score 5-2. It was a part of a 5-1 drive for the Lady Hornets as they built a 7-3 lead.

The Belles kept in the match however, forcing the lead back 9-10. The Lady Hornets would need the help of Mount hitting errors as well two kills from Hernandez, to bring the score to 15-16. And Bryant took the lead after a hard kill bounced awkwardly off a Mount player to the sideline opposite of the fans and both benches, miraculously going into basketball goal on the far wall, causing fans of both teams to erupt into a mixture of laughter and cheers.

The Belles would find themselves at game point first, forcing the Lady Hornets to score two unanswered points. Bryant would manage to come back with a tip-over kill from Hernandez and an ace from Buiting.

It was 25-25 until a Mount block set up game point, which the team finished off.

The start of game three could be summed up by one of the opening plays when two Lady Hornets failed to communicate, allowing the ball to fall between them. The Belles went on a nine-point run before a Buiting kill snapped the drought.

Struggles would only continue as the Lady Hornets found themselves behind 9-20. They would slowly chip away at the lead with a Cora Edwards ace swung the momentum in the Lady Hornets’ favor, moving the score to 12-21.

Much like in the first set, time simply ran out on the Lady Hornets as the Belles managed to reach game point before closing the game with a kill.

Bryant would fall in the set 23-25 with four aces and one serving error. The Belles would pick up one ace and one error.

Game four would carry over the disappointment from bringing the game so close but coming up just short. The Lady Hornets received an early lead from back to back miss-hit balls,3-2.

But a 3-11 swing allowed the Belles to build a lead from which the Lady Hornets could not recover. Bryant fell behind 9-19.

A brief rally showed similar things from game three, but the Belles managed to hold off the Lady Hornets’ attack. A Bryant serving error put the Belles at match point. They closed out with a kill.