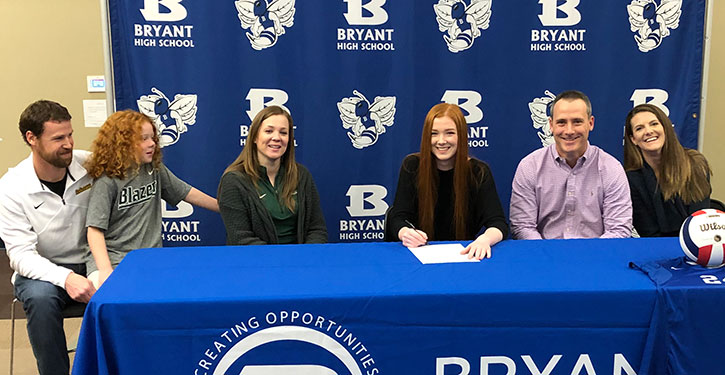 On the day she signed to continue her education and her volleyball career at Belhaven University in Jackson, Miss., Faith Stone got a surprise letter. Bryant head coach Leigh Ann Back read it to her without telling her who it came from.

She figured it out after a while.

In part, it read:

“I wanted to surprise you on a day that back in my day, meant so much to me as well.

“Let’s start with the fact that I’ve known you since you were such a clumsy little 14-year-old. I have watched you improve day after day, month after month. You have become the type of player that any coach could play.

“You took my attention with your great volleyball skills and by the way the love the game. But that’s not why you kept it. Not only are you an amazing player that works very hard when the game gets tough, you’re the kind of player that will play your heart out every play of every game, the kind that will not let her teammates down but, instead, supports them and cheers them on even when you’re having difficulties of your own. Your team spirit is awesome. And, Faith, I hope you never change in years to come. I have to say that I’m very proud of you and the person you’re becoming. You’re such an awesome friend who I get to call my little sister.

“The next chapter in your life is about to begin and, although it is exciting, it will be more challenging than a lot of people think. Try to always keep your incredible positive spirit, good heart and huge love of the game deep inside you. Live your dream and stay humble as you always have. You have to know that there will be times that you’re going to ask yourself, ‘Why am I doing this?’ You’ll want to give up. Just remember that every day you spend at the gym, working hard, sweating and sometimes crying, is a day that you get better.”

The letter came from Adisa Hodzic, a former volleyball player and graduate assistant coach at the University of Arkansas-Little Rock, who had taken Stone under her wing as a coach for her club team and a personal coach as well. Hodzic’s visa ran out so she had to move back to eastern Europe where she currently plays professional volleyball in Boznia.

“She’s coached me since I was 14,” said Stone, the daughter of Phyllis and Jeff Dills and Daniel and Tara Stone.

“It was actually a long process,” she said of her recruiting. “I had a to make a lot of recruiting profiles and I ended up getting a lot of offers but (Belhaven head coach Justin Dee) came to a lot of my tournaments and watched a lot of my games and stayed consistent.

“At the Little Rock tournament, he brought his team there and he offered me,” Stone recalled. “And it was really just awesome because he’s one of the best coaches I’ve ever met. He’s really nice.”

“I wasn’t really considering anywhere else because I already fell in love with the school,” she said. “It’s really nice. Everyone’s really welcoming there. It’s just really pretty there.

“Another reason that I committed is because they have the exact study that I want to do, Art Therapy. A lot of schools don’t have that, but they do so it was really cool.”

“Faith is kind of a tough nut to crack,” said Bryant volleyball coach Leigh Ann Back, who took over the job two-thirds of the way through the 2018 season last fall. “She’s all business until you get to know her. Then she is all team; team first whether she is having an off day or having a good day.”

That’s not by accident, Stone acknowledged, “I feel like I always play for my teammates no matter what, even if I’m trying to get where I need to be. I feel like that’s more important to play for your teammates. That’s what my college coach told me, that he saw in me, that I played for them and not for myself.”

Back gave an example. “We had a situation where we had a player go down in one of our tournaments and she looked at me and said, ‘Where do you need to move me to help the team. I’m ready to go,’ she related. “I just kind of looked at her and went, ‘Okay. The libero jersey?’ She just kind of laughed a little bit but we moved her to the middle and she played her heart out. She is a true team player and I really enjoyed what little time I got with her, enjoyed getting to coach her.”

Stone, a front row player, was voted the team MVP for the season, earned all-conference honors and is a nominee for the annual Arkansas High School Coaches Association All-Star game in June.

Stone said she started playing volleyball when she was in the sixth grade, around 12 years old.

“I used to play basketball,” she stated. “I guess I played that because it was our family sport. Then when I started playing volleyball, it just clicked, and I just loved everything about it. It was awesome.

“It’s been really hard,” Stone allowed. “There’s been a lot of hard coaches and it’s hard to get used to some kinds of coaching because they’re all different. I’ve worked really hard, done a lot of private lessons. I haven’t gotten to hang out with my friends a lot because I’ve been playing volleyball. It’s what I’ve put first.

“I want to thank all my coaches and trainers . . . and my parents and my family for helping me get to where I’m at today,” she said. “I wouldn’t be here without y’all. I’m excited for my future volleyball career.”