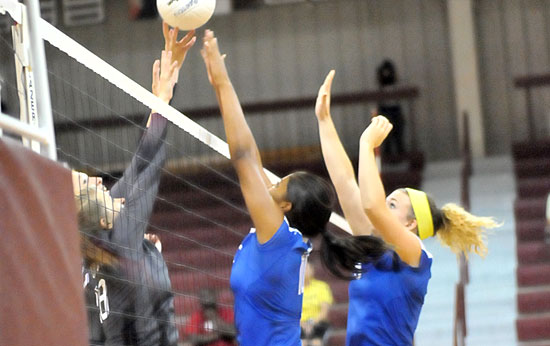 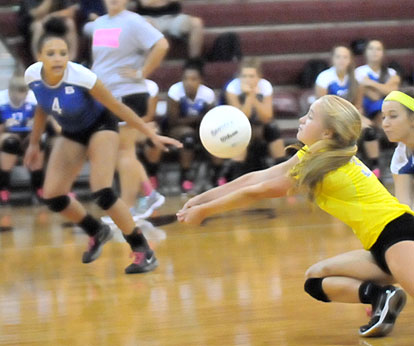 Whitney Brown digs up a hit as teammate Savannah Shelton looks on. (Photo by Kevin Nagle)

BENTON — The Bryant Lady Hornets won four of the five sets they played, each against different opponents, at a jamboree at Bryant High School and Junior High on Thursday night.

The team is preparing for its season-opener on Tuesday, Aug. 25, against Fountain Lake. They’ll scrimmage in the Blue-White Fanfare event this Saturday around noon at the Bryant Middle School gym.

“Overall, I thought we had a good night,” said Bryant coach Beth Solomon. “Talking and communication seemed to be the difference maker in the Pulaski Academy game that we lost.” 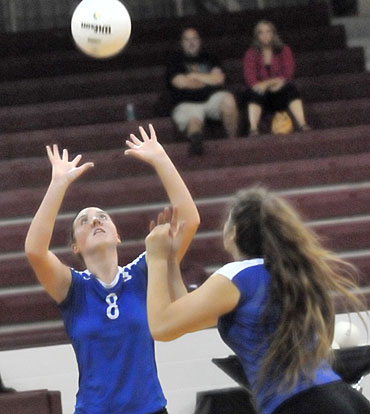 Britney Sahlmann sets for a teammate. (Photo by Kevin Nagle)

In that match, Allie Anderson had four kills and Raven Loveless three. Alex Dillard and Britney Sahlmann each had one. At the service line, Kendall Selig served up two aces and Anderson had one. As a team, the Lady Hornets got 78.6 percent of their serves in.

“I saw several good things from our girls and some things that we know we need to focus on a little more heavily,” Solomon said of the evening overall. “We missed way too many serves. We were serving aggressively, which is good, but we had way too many serves in the net.

“We had some great hits and we had some smart plays,” she added. “We still need to become more consistent and we will as the conference season approaches.” 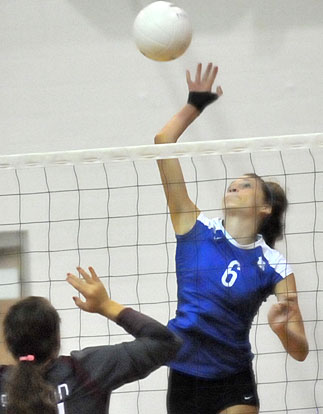 The Lady Hornets were good on 83 percent of their serves.

Against Little Rock Christian, they were good on over 91 percent of their serves and Savanna Shelton had three aces. Anderson and Whitney Brown added an ace apiece. Anderson came up with eight kills. Loveless had two and Sahlmann one. Anderson had two blocks while Brown came up with seven digs. Sahlmann and Shelton had one each.

Brown had four aces in the set with Fountain Lake. She and Squires also came up with three digs each. Selig had two and Loveless one. Service aces were also contributed by Anderson and Squires. At the net, Loveless and Anderson each had three kills while Selig had one.

In the five games, Sahlmann set for 24 assists. 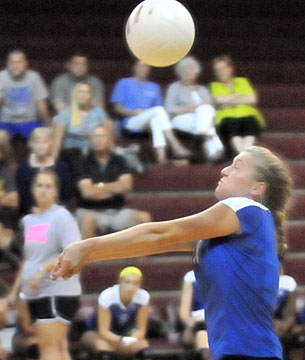