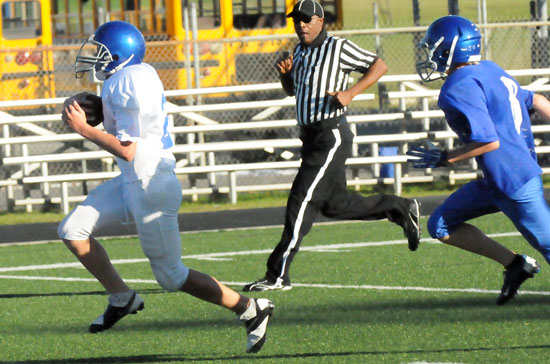 The Bryant White Hornets seventh grade team of Bryant Middle School appeared to be down to one last possession. Trailing the unbeaten Bryant Blue Hornets of Bethel Middle School, 8-6, in the season finale for both teams. 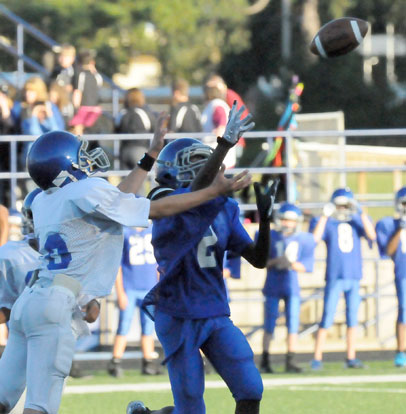 Aided by a holding penalty, the Bryant White defense had forced Bryant Blue to turn the ball over on downs with 4:07 left to play. On White’s first snap from its own 30 yard line, Grant Botti broke loose, racing up the sideline on a dramatic 70-yard touchdown run that gave his team the lead.

On the conversion, Blue’s Josh Stevens stopped a run by quarterback Jesse Windemaker leaving the game still very much in doubt with 1:43 left to play.

Blue got help from a pass interference penalty but consecutive procedure penalties took back 10 of those 15 yards. Eventually Bethel faced a third-and-21 from its own 34 with time running out. Quarterback Logan Chambers tried to get a ball deep down the field to big-play receiver Randy Thomas but his throw was picked off by Andrew Hayes and Bryant White had secured the victory. 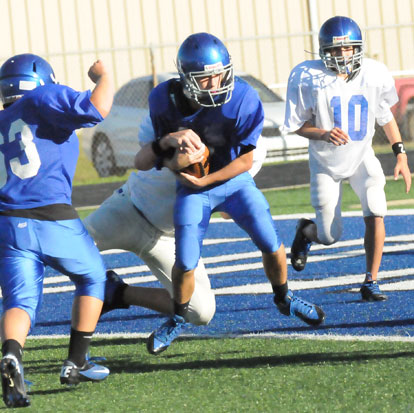 Bryant Blue’s Tyler O’Neal turns toward the goal line on a successful two-point conversion after getting a block from teammate Clay McElyea (63). (Photo by Kevin Nagle)

“We didn’t play our best but most of that had to do with BMS,” he added. “They did a really great job. They had two long touchdown drives, kept the ball all night. Tyler O’Neal did a good job running the ball for us.”
White opened the game with a drive to the Blue 11 but the Bethel defense stepped up with consecutive lost-yardage stops, the first by John Burton and O’Neal, the second by Thomas and Patrick Karp. Two incomplete passes followed and Bryant Blue took over on downs at its own 17.

After picking up 9 yards on first down, Thomas was hit in the backfield and swung around by his jersey. He somehow kept his feet and broke clear toward the left sideline. Once he got there, he streaked to a 74-yard touchdown.

O’Neal ran in the two-point conversion and Bethel had an 8-0 lead.

White responded with a 70-yard march in six plays. Big Travis Bradberry started the march with a 15-yard burst. A play later, Windemaker, trying to pass, scrambled under pressure, reversed field and dashed 28 yards to the Blue 27.

On the two-point try, however, Hunter Ulmer stopped Windemaker and Bethel retained an 8-6 edge.

An interception by Jakob Neel with 1:21 left in the half gave Bryant White another chance to gain the lead. After advancing to the Blue 34, White tried a flea-flicker with Botti taking a handoff around the ride side. He pulled up and threw back to Windemaker who hauled in the pass and headed up field. He got inside the 15 but was stopped as time ran out.

Bethel got the ball to start the second half and O’Neal broke a 30-yard run to get his team into White territory. But the drive stalled there. An incomplete pass on fourth down gave it back to White.

After Karp, Michael McKnight and O’Neal combined on a stop to set up a third down at the 50, the ball was jarred loose and Dalton Winkler pounced on it for Blue.

O’Neal, who finished with 75 yards on just seven totes, lashed 21 yards. After benefitting from a pass interference penalty and suffering a holding penalty, however, the drive stalled and White took over at the 30, setting up Botti’s game-winner.

The win avenged a 16-8 loss to Bethel earlier in the season. Bryant White finishes the season 5-2. 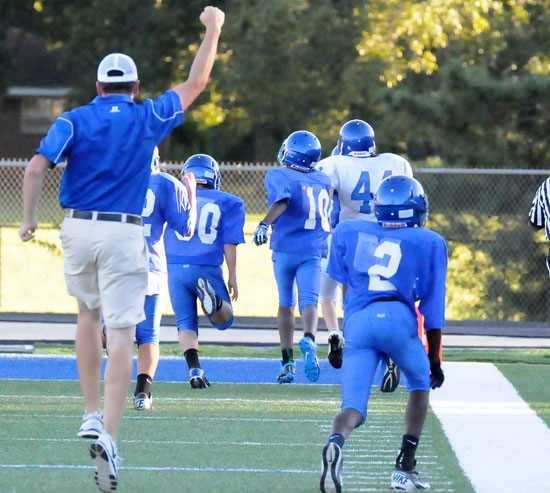