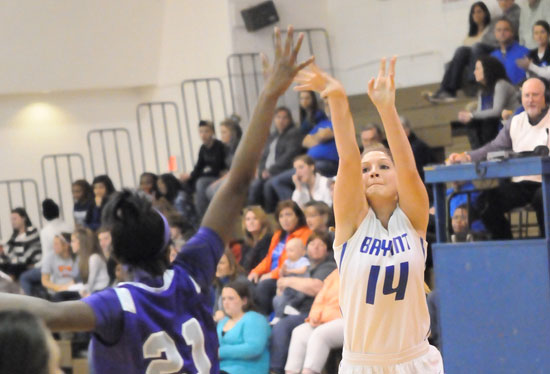 It figured for the Bryant Lady Hornets to have a chance to beat the El Dorado Lady Wildcats — something no one else in the South Conference had been able to do — they had to try to at least slow down the inside power of 6-3 senior post Taylor McCool. 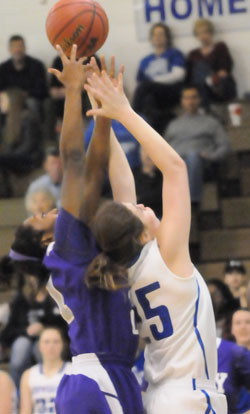 And, in their game at the Hornets’ Nest on Friday night, the Lady Hornets limited the El Dorado star to just 4 points.

Not known for their outside shooting, however, the Lady Wildcats threw in six 3-pointers by intermission. Forced to try to get out on the shooters a little more, the Lady Hornets were victimized by McCool in the second half when she scored 13 points to lead her team to a 49-29 victory.

To go with McCool’s 17 points, she had six blocks and just as many rebounds.

“She’s so dominant,” acknowledged Bryant head coach Brad Matthews. “You’ve really got to build your defensive plan around her because, if you don’t, she can dominate a game. I thought our post defenders did a really good job the first half. We were able to keep her off the boards for the most part.

“In the second half, once she got in there and really started pushing and taking up space, she had 13,” he added. “She’s really good, really big, really talented, really skilled.”

As for the 3’s, five different players contributed for eight in the game. Keyana Smith finished with three and Yasmine Jones two.

“We knew (Smith) was a really good shooter for them,” Matthews said. “We lost her a couple of times in transition.

“If they’re going to shoot like that, El Dorado’s going to be really hard to beat,” he noted. “You’ve just got to tip your hat to them. 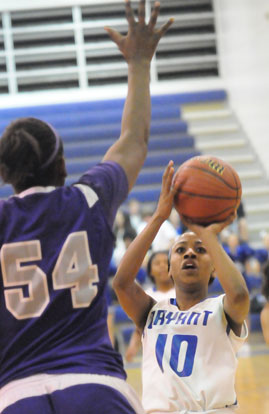 “I thought our kids fought hard,” the coach added. “They kept fighting and digging. But El Dorado’s length and athleticism, their size on defense — once they went zone there in the third quarter, I didn’t feel like we were getting good shots. We couldn’t get in a rhythm against it. They cover so well out of that zone. They move so quick.”

Yet, the Lady Hornets were within 8 with 3:39 left in the third quarter. But McCool continued a string in which she scored 13 of her team’s points during a 21-10 stretch that put the Lady Cats in control. That was a run, by the way, that was trumped by the last of the 3-pointers. Smith hit one then Tasheanne Armstrong hit another to make it 44-22.

To go with McCool’s scoring, Jones finished with 11 and Smith 9. For Bryant, point guard Jakeria Otey led with 14 points. Maddie Baxter added 5 off the bench including a 3 as she was fouled in the final 30 seconds of the game.

The game started out, appropriately enough, with a 3 by Chardasia George. It was her only basket of the night.

Anderson hit a short jumper off a feed from Otey to make it 3-2 but El Dorado scored the next 7 points including a triple by Bethany Billings. Down 10-2, the Lady Hornets came out off a timeout and Anderson banked in a shot. Smith then sandwiched Allen’s basket with a pair of treys and it was 16-6 going into the second quarter.

Baxter scored after grabbing an offensive rebound, avoiding McCool on the shot. George countered with a free throw then it was Jones’ turn to pop a couple of 3’s around a basket by Otey. She added a short jumper in the final minute to make the halftime score 23-12. 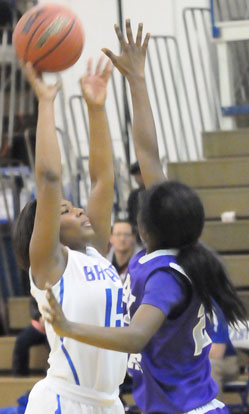 Jayla Anderson (15) reaches high to get a shot away. (Photo by Kevin Nagle)

Bryant cut it to 8 twice in the third quarter, initially, on a 3 by Otey to start the second half.

The Lady Wildcats, at that point, starting making a concerted effort to get the ball in the post to McCool and she started her scoring outburst. The lead grew to 29-16 but Otey canned a 15-footer then Weaver splashed a 3 and the margin was back to 8, 29-21.

That’s when El Dorado put together a game-breaking 15-1 blitz. It was 33-21 going into the fourth quarter but the only scoring Bryant could muster was a free throw by Miller until Otey scored with 3:22 left in the game.

The game wrapped up the first round of conference play. Bryant, now 6-11 overall and 2-5 in the league, will host Benton on Tuesday.