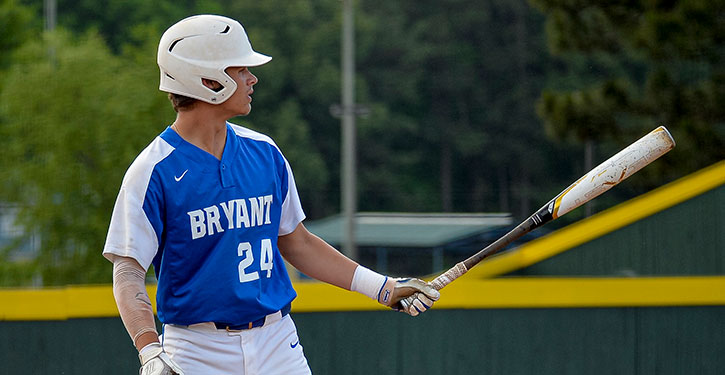 Senior Austin Ledbetter, a three-year starter for the Bryant Hornets, belted his first varsity home run with a man on in the bottom of the seventh inning to lift his team to a 9-8 victory over the Sheridan Yellowjackets, in a back-and-forth battle between two conference champions as they prepare for their respective State tournaments in less than a week.

It was a game fitting a State championship as the two heavyweights traded the lead until Ledbetter’s blast turned a 8-7 deficit into the victory.

Bryant had taken a 7-6 lead in the bottom of the sixth only to have Sheridan rally for two in the top of the seventh to go up 8-7.

In the home seventh, Blaine Sears led off with a single up the middle. Sheridan turned to its fourth pitcher, Fletcher Williams. He got Ryan Riggs to pop up his sacrifice bunt attempt for the first out. A wild pitch moved Sears to second then, on a 1-1 delivery, Ledbetter unloaded for the walk-off victory.

“I’m proud of Blaine Sears right there,” Queck asserted. “We had to have the lead-off on. And if you think about it, in the final inning, doesn’t matter how much you’re up, if you don’t get that first guy — that’s important. That sets the tone for the inning.

“These guys played hard,” he said. “I never doubted the fight in situations to come back. I think they’ve always done that. I just wish sometimes we wouldn’t get to those situations.

“I thought we left a few runs out there and we made some inopportune mistakes,” the coach related. “We’ve got to clean up that stuff or we’re going to come home (from State) early.”

Starters Will Hathcote for Bryant and Evan Ward for Sheridan got through the first two innings unscathed. Bryant would’ve scored in the first. Riggs doubled but when he tried to let it into a triple, he was thrown out on the relay to third. It didn’t help that he had to round first a little further than he wanted to, trying to avoid the field umpire.

Ledbetter followed with the first of his three hits, which would’ve made it 1-0.

Sheridan broke through in the third, scoring four times on four hits. Hathcote lost the strike zone momentarily, walking two. Konner Canterbury started the inning with a double but came up lame as he was headed into second. Peyton Hill sacrificed pinch-runner Brodie McElroy to third and Trace Watkins singled him in. After the walks, Fischer Thompson singled in a run to make it 2-0.

Queck called in lefty Aiden Adams who was greeted by Hunter Dorsey two-run single as he poked it through the right side.

Adams struck out Williams to end the uprising.

Bryant got a run back in the bottom of the third without a hit. Sears walked and stole second. A one-out walk to Ledbetter followed. Then Noah Davis was struck by a pitch to load the bases for Conner Martin, who delivered a sacrifice fly to right.

Adams pitched around a one-out walk in the fourth and, in the bottom of the inning, the Hornets got closer.

J.T. Parker walked then Logan White hit a tapper to third which drew a wild throw to second in an attempt to get a force. Parker wound up on third. He held when Lawson Speer bounced into a force at second. Speer stole second and, with two down, Sheridan changed pitchers going to lefty Brandon Arledge to face the left-handed hitting Riggs.

Riggs turned around a 2-1 pitch and hit it to the right of the first baseman, who made a diving stop. But he beat Arledge to the bag and Parker scored. Speer followed when the throw got past Arledge.

Adams worked around an error and a walk in the fifth, striking out a pair. In turn, the Hornets tied it 4-4. With two out, Parker looped a single to right, took second on a wild pitch as Logan White worked a walk. Turner Seelinger came on as a pinch-hitter and delivered an RBI single to center.

The Hornets stranded runners at second and third. Two of the 10 left aboard that they had in the game.

Sheridan answered in the top of the sixth. An error opened the door with one out. Watkins singled to left to send Hill to to third. And when the throw in from the outfield got away from Martin, the cutoff man, Watkins hustled into second.

That set the table for Beau Kuttenkuler, who got down in the count 0-2 before slapping a single through the right side to drive in two, putting Sheridan back up 6-4.

Adams retired the next two to force the Jackets to strand a man at second.

In the home sixth, controversy arose as Bryant answered Sheridan’s rally with one of its own.

Ledbetter singled with one out then Davis drew a walk. Conner Martin, facing Hunter Dorsey, the third Sheridan pitcher, tied the game with a shot into right center for a two-run double.

Garret Wilson followed with a grounder to third. Martin was caught off of second and was run down but he stayed in it long enough for Wilson to get to second. Sheridan head coach Mike Moore argued that Martin had run out of the baseline before he was tagged and, under those circumstances, Wilson should have to go back to first. But the pay stood.

And it proved important when Wilson advanced on a wild pitch then scored on a clutch single by Parker, giving Bryant a 7-6 lead.

A bloop single by Thompson started the seventh. An errant pickoff throw to first let him get to second. Dorsey singled up the middle to send Thompson to third with the tying run.

Colby Morrow came on to relieve Adams and tried a first-to-third pickoff move. The field umpire ruled Dorsey safe at first but Queck appealed to the Homeplate umpire who saw the reverse sweep tag by Parker at first and called him out. Moore argued that Morrow had balked on his step to third but got no satisfaction.

But a wild pitch allowed the tying run to score. Gabe Kutenhuler kept the inning going with a two-out double to the gap in left center. The Hornets appeared to be out of the inning when Hill popped up a 2-0 pitch to the right side. But Parker lost the ball and it fell between him and Ledbetter, the second baseman. The go-ahead run scored.

Morrow fanned Watkins to end the inning and the bottom of the seventh drama began.

They open play at State on Friday at noon against either Bentonville or Fort Smith Northside.

“In our six-game stretch from yesterday to the finals, we’re 2-0 and we’re going to move on to Monday and see if we can get 3-0,” Queck said. “From there on out, it’s a one-game season.”