MOUNTAIN HOME — With two out in the bottom of the ninth, Marcus Wilson walked. With Hayden Lessenberry at the plate, Wilson swiped second. Moments later, on a 3-2 delivery, Lessenberry, who had blasted a game-tying home run to tie the game 3-3 just an inning before, stroked a single to left to drive in Wilson for a walk-off win for the Bryant Black Sox over the Blytheville Casons at the 2013 Senior American Legion State Tournament Saturday.

Now 35-3, Bryant will take on North Little Rock on Sunday at 9 p.m., in a winners bracket semifinal at Cooper Park. 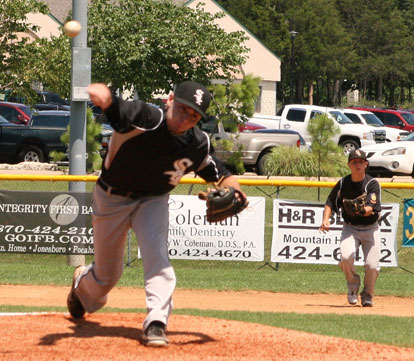 Until Lessenberry’s dramatic eighth-inning blast, the Sox were on the wrong end of a 3-2 game. Blytheville had erased Bryant’s 2-0 lead with three unearned runs off Sox starter Hayden Daniel. A throwing error, a hit batsman and a single produced the first run. The Casons then squeezed in a second tally to tie the game. And when a drive to right was misplayed, Blytheville had a 3-2 edge.

Daniel, who only allowed three hits in his eight innings of work on the mound, kept it 3-2 through the top of the eight by pitching around a two-out double in the fifth and a two-out walk in the eighth. In between, he set down nine straight. Overall, he walked two, hit a batter and struck out two while keeping it close.

Zach Jackson wound up with the win in relief. He retired the side in the top of the ninth, fanning one and working around a two-out error.

The Sox’ first two runs came in the second when Tyler Nelson belted a double to right-center, Chase Tucker was hit by a pitch and, after a sacrifice by Tryce Schalchlin. Austin Caldwell got a squeeze bunt down that produced the first run as he reached on an error. Korey Thompson squeezed in the second run.

Wilson singled in the third; Trevor Ezell doubled in the fifth and Wilson beat out an infield hit but Blytheville got off the hook. Thompson doubled in the seventh. He took third on Ezell’s grounder to the right side but was stranded.

In the bottom of the eighth, Lessenberry unloaded with one out on a 2-1 pitch. With two down, the Sox threatened as Tucker singled, Daniel was hit by a pitch and Caldwell was struck by a delivery, loading the bases. But .Thompson bounced to short resulting in a force out that sent it to the ninth.

Jackson struck out the first Blytheville batter, got the second to pop to Thompson on the infield. An error on a grounder to first off an 0-2 pitch then a stolen base had the tying run in scoring position before Jackson got the final out on a grounder to third. 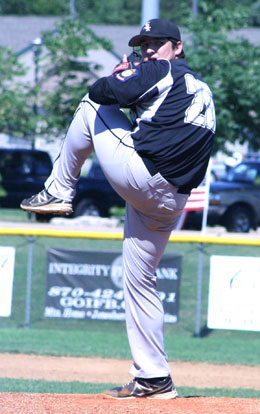