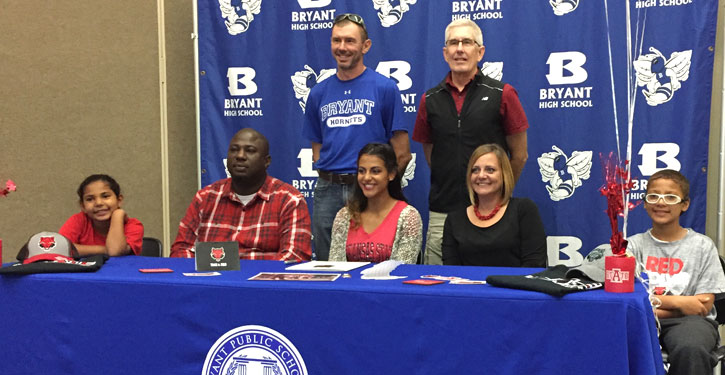 Bryant senior Jadyn Lewis recalled the first time Lady Hornets track coaches urged her to run the quarter-mile as a freshman when they were looking for the best group they could put together for the 4×400 relay at the Class 7A State meet that year.

“She fought us tooth-and-nail,” recounted Keith Dale, the sprint coach at the time who is now the girls track coach at BHS, succeeding Danny Westbrook, who retired last spring after 35 years on the job.

“I was scared of it because it doesn’t feel good running the 400,” she explained. “I really did not want to do it.”

“We finally convinced her, ‘We’ve got enough conditioning in you. You’re going to do well at it,’” Dale stated. “She said, ‘Coach Dale, you are not making me run a quarter. I do not run the quarter. I run the 100 and 200.’ But I saw it in her. Her desire to run, to compete is what makes her the best 400-meter runner that I’ve seen in a long time.”

Indeed, as she continued to excel at the other events, Lewis became one of the best quarter-milers in the state and the region.

And, ironically enough, on Thursday, Lewis, the daughter of Jimmy and Taryn Lewis, signed a National Letter of Intent to continue her education and her track career on scholarship at Arkansas State University in Jonesboro, running the quarter.

“It ended up working out,” she said with a grin. “All that fighting and head-knocking was all worth it.”

Westbrook was on hand for the signing ceremony at BHS and acknowledged that Lewis is one of the best athletes he’s ever coached.

“And, I think this year is going to prove that, for sure,” he added. “I look for amazing things. If she stays healthy this year, I’m really looking forward to watching what she accomplishes.

“She works hard, she’s a leader and she’s almost like a cheerleader on the team,” said Westbrook. “It doesn’t matter who it is, she’s out there cheering them on. That’s what I think’s going to really help her in college. I think even as a freshman — not to mention her athletic talent, which is awesome — just her leadership ability. If I was a college coach, I’d give her the moon to come to my school.”

“She is top notch,” Dale asserted. “She works just as hard on the track, off the track. You put her in a weight room and she’s going to give you everything that she’s got because she has an end-goal in sight. This is something that she’s been working for, for three years, ever since I’ve known her.”

Though she started running track in seventh grade, it was that freshman year when she got serious about it, Lewis said.

“I played softball for a long time but you can’t do softball and track at the same time. They’re in the same season (in high school),” she related. “I switched to track and I took it more seriously because I thought I could get to college, would have a better college opportunity with track.”

A three-year letterman, Lewis — so far — has been all-conference five times, all-State in Indoor track four times and all-State outdoors five times. She was the high-point scorer at the 2016 Indoor State meet and picked up the Most Valuable Performer award.

Outdoors, she’s competed in the Meet of Champs in six different events.

After setting the freshman record in the 200, she set the high school mark and three times, she’s been a part of a 4×400 relay team that broke the school record.

And also last spring, she competed in the State Heptathlon. She was fifth after the first day and wound up ninth.

“Heptathlon was really fun,” Lewis said. “I had only done the 200 and the long jump so everything else was, ‘Here we go.’ I was kind of scared of the high jump actually. I broke my nose doing that in practice. But it was fun.”

“That’s a lot of accomplishments,” Dale said. “Her biggest accomplishment is the love and desire for her team, the way that she’s able to bring people together.

“She’s a great spiritual leader for our team,” he continued. “I credit her with the growth and success of our sprint program these past four years. She had the vision of our sprint team, along with me, and getting the best sprinters that we could. It was her going from one person to another person, saying, ‘Hey, come on out and run.’ That really caused our program to grow. I’m just the facilitator but she’s the true leader of that program.”

“It’s just my personality,” Lewis explained, particularly regarding her leadership of the record-setting 4×400 relay team. “I’m very competitive. I was like, ‘We have an opportunity, why not take it?’ And it never really had been done before. We hadn’t really been known for doing big things. Having the opportunity to say, ‘Hey, we could make it to State’ or ‘We can make it to the Meet of Champs.’ It was like, ‘Why not?’”

“That’s one thing I think ASU is getting,” Westbrook said. “Even as a freshman, I saw her telling those seniors, ‘Hey, this is what we’ve got to do to be successful.’ She did that all through her high school career and I see that continuing at ASU. I’m proud of her.”

Lewis said, “The most fun part is the team and having that family feel, being on a team and being able to contribute, knowing that I’m not just running this for me, I’m running it because God gave me the ability and I have teammates cheering me on.”

She said she chose ASU over an offer from Southern Illinois.

“A-State felt like home to me. I can’t wait to get up there.”